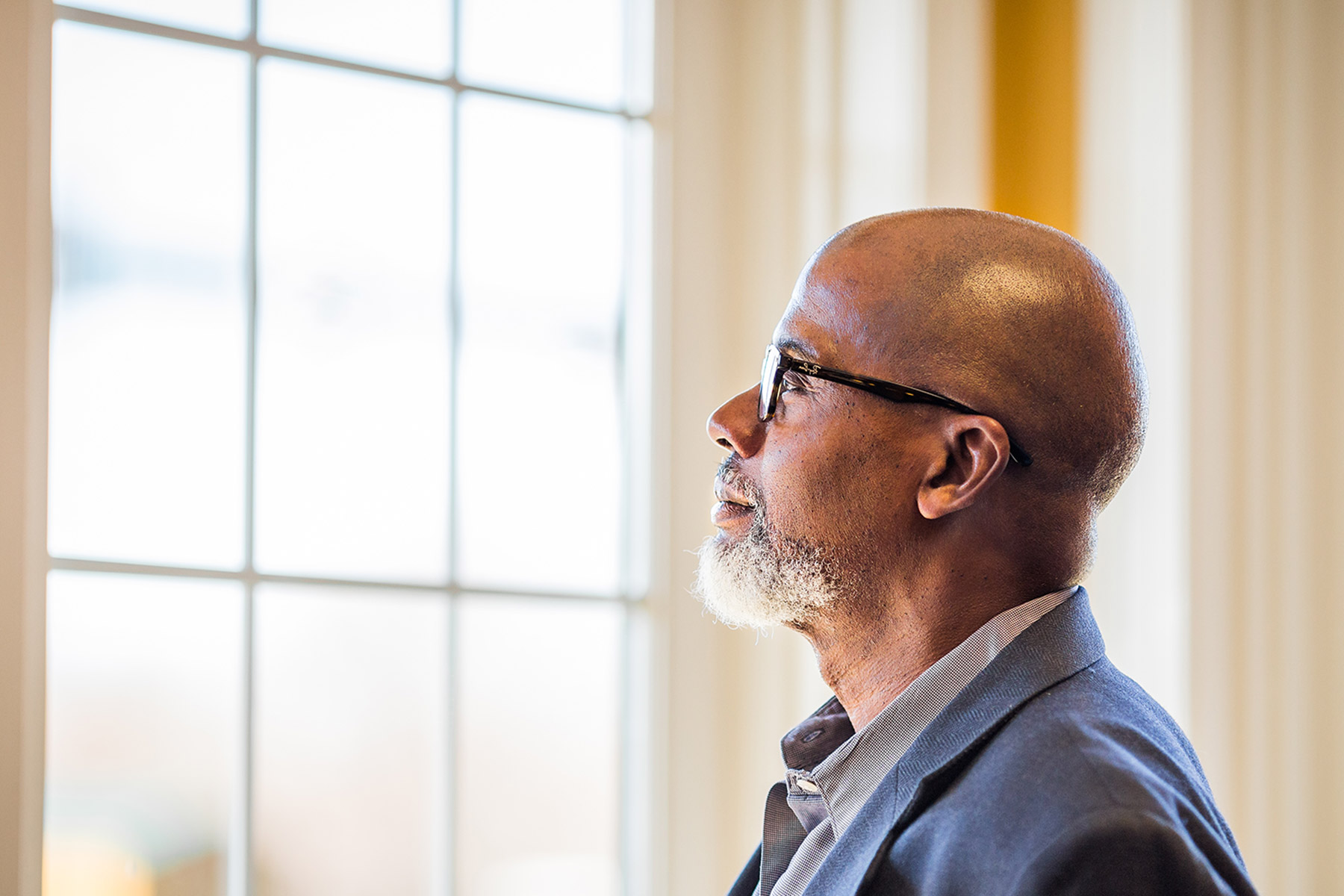 Michael Suggs’ view of downtown Winston-Salem used to be, well, higher. In the almost 20 years that he worked in marketing and government relations for Reynolds American, Inc., he would look out from his office on the 14th floor in the R. J. Reynolds Building, which today houses the Cardinal Kimpton Hotel, and imagined city development that reached into every neighborhood.

“I used to look out my window at the east side of town and wonder why nothing was happening on that side of town, why all the development was happening on the other side of Winston-Salem,” says Suggs, who is today president of the Goler Community Development Corporation, an organization dedicated to developing community in downtown Winston-Salem and other disadvantaged areas within the city.

And from that vantage point, he developed a big vision for the city of arts and innovation—one that encompassed more than renovating buildings and focused on building community.

In 1998, the Goler CDC was developed out of Goler Memorial A.M.E. Zion Church, a pillar of downtown Winston-Salem for over 130 years, located on the north end of the Innovation Quarter. When other businesses and institutions pulled out of what used to be a thriving main thoroughfare for the black business district, the church stayed. The congregation wanted to be a part of the revitalization of downtown.

“This area had gone through a lot of disinvestment; it had become a dilapidated, rundown area,” Suggs says. “People didn’t want to come down here.”

The church bought 14 acres of the neighborhood surrounding it, bounded by Martin Luther King, Jr., Drive, Patterson Avenue and the Downtown Arts District. It also hired an urban planner from Pittsburgh that conducted interviews with 300 community stakeholders to decide what to build on the land that it acquired.

What came out of those interviews was a mission to create a community—one that was mixed-income, multi-ethnic and multi-generational.

“That’s what we set out to build,” Suggs says.

Out of that mission, Goler CDC developed a master plan for the land available to it and added a few projects along the way, all under the leadership of Suggs, who took early retirement out of Reynolds so that he could impact the part of the city he used to watch out of his office window.

What a Community Development Corporation Does

Today, Suggs’ view of Winston-Salem’s cityscape is a little different. Stepping just outside the Goler CDC offices located on the first floor of the Truliant Federal Credit Building on Martin Luther King, Jr. Blvd., Suggs can see a handful of the many projects Goler CDC has accomplished in the 20 years of the non-profit’s existence.

Directly across the street are the 757 North Apartments, a residential development in the north end of Wake Forest Innovation Quarter. A segment of the apartments is designated for workforce housing, designed to create economical on-ramps into the community blossoming in the Innovation Quarter.

Just behind the apartments stand a few of Goler CDC’s other projects, including the market-rate Gallery Lofts located in a renovated tobacco building and Goler Manor, which provides affordable housing for seniors who make less than 30 percent of the median income.

Goler CDC’s mission has also resulted in numerous non-housing projects that help grow a flourishing community: from an arts park-turned dog park and an urban farm that grows fresh produce for the Kimberly Park community, to an innovative child development center and a resource center for minority- and women-owned businesses competing for commercial projects.

“We believe in creating a community where anyone can feel comfortable and participate,” Suggs says.

That vision of community drives initiatives like the affordable housing units at 757 North Apartments. But while working on that development, Suggs had an unexpected realization.

“I was surprised how many people could not afford ‘affordable’ housing,” says Suggs. At that point, Goler CDC switched its focus to a new kind of development: workforce development.

As the city of arts and innovation has been transforming itself, the kinds of jobs available in the community have been changing as well.

“Between tobacco and textiles, Winston-Salem has been a manufacturing economy for a long time,” says Suggs. “Those used to be sure-fire jobs for people in the community, but now there’s a misalignment of the skill sets of many people in our community with the jobs that are emerging with the new innovation economy.”

Working Across the Aisle

The “secret sauce” of Goler CDC’s success consists of the partnerships they cultivate for their development projects.

“We try to stay connected to the community so that we can find out what the community needs, whether that is affordable housing, a neighborhood restaurant or jobs,” says Suggs.

And to fill those community-driven needs, Goler CDC partners with whoever can help make the vision a reality. Sometimes that results in unexpected partnerships, like Goler CDC’s relationship with Truliant Federal Credit Union.

As Goler CDC was developing a mix of housing to help enrich the community in downtown Winston-Salem, the group started thinking about what the people who lived downtown would need.

“We thought that having a financial institution in the area was going to be very important,” says Suggs. “We wanted to provide that amenity for people living here.”

At the same time, Truliant Federal Credit Union was looking to open a location on Martin Luther King, Jr. Drive. Now a major credit union with locations in three states and assets over $2 billion, Truliant’s roots and headquarters are in Winston-Salem.

“You can’t abandon your roots,” says Marc Schaefer, who is chief executive officer of Truliant. “The institution was born out of companies in East Winston, and we needed to have a presence there.”

When he came onboard as CEO, Schaefer oversaw a merger with Victory Masonic Credit Union, the oldest historically African-American credit union in North Carolina, and opened a branch in a former Food Lion building in the East Winston area. When Truliant discussed a new location with the community and the leadership of Victory Masonic Credit Union, a location on Martin Luther King, Jr. Drive was their suggestion.

“At that point, nothing in the north of the Innovation Quarter was online yet, and there was nothing on MLK except old buildings and empty lots,” says Schaefer.

But Schaefer heard about some of the developments that the Goler CDC were developing, and the two groups made an arrangement. Instead of Truliant purchasing the land and building a branch, Goler CDC leadership requested that the credit union partner with them in building a larger multi-tenant “northern gateway” into the community.

“We saw the partnership as an opportunity to bring Winston-Salem together, to create engagement,” says Schaefer. “It’s an opportunity for us to provide financial services and guidance to the community.”

“We know that we don’t know it all, but what we try to do is work with experts, people who have done it before,” says Suggs. “We don’t mind working across the aisle,” he continues. “Whatever that aisle is!”

As the Innovation Quarter and the city as a whole continue to attract jobs to the community that are technology-focused, there’s a growing need to provide a workforce to fill these types of jobs. And for an innovation economy to impact the whole of Winston-Salem, people need opportunities to develop the skills necessary to participate in the changing workforce.

“In some parts of our city, the unemployment rate is much higher than the national average, so we asked why people in these areas are not working,” Suggs says. “One reason is that some do not have the skill sets necessary for these new jobs that are changing our economy.”

To remedy that mismatch, Goler CDC determined to find ways to help people overcome the barriers that prevent them from acquiring the skills needed to enter technology careers, whether those obstacles are transportation, child care or simply not knowing where to begin.

And so was born Goler CDC’s latest project, TechCareers 2020. The program, which launched in March 2018, provides personalized pathways for people in the community who want to enter technology careers, but who have had little to no training in those areas.

“Sometimes, all a person needs to get a tech job is a certification. Other times, more schooling is needed,” says Suggs.

TechCareers 2020 helps applicants prepare for jobs in a variety of technology careers, from call center representatives and medical coders, to web developers and cybersecurity. For many of the applicants, there are factors outside of competency that make getting the right training difficult.

We are just trying to play a role in making sure that more people get a chance to participate in the innovation economy that’s coming.

“What’s different about this program is that we will look at each individual and develop a pathway for them based on where they are at, their current skill level and the barriers they have to acquiring the necessary skills,” says Suggs.

The TechCareers staff—which consists of a program director, case manager and student support coach—provides each participant accepted into the program with funding and an educational plan tailored to his or her specific barriers and goals.

While there’s no cost to the program for participants and financial help is provided on a case-by-case basis, participants have skin in the game.

“We ask participants to show a level of commitment to the program,” says Suggs. “They might not have the resources to get a degree from Forsyth Tech, but everyone has 24 hours in a day, and we want our participants to use that resource.”

The technology careers in the program are not chosen at random. Goler CDC made a point of connecting with local employers on the front end of the program to gauge their employment needs and the issues that they’ve had in finding qualified employees.

But before they can think about employment, people need the skills, and for that piece of the puzzle Goler reached beyond its own walls. The community development group created partnerships with other organizations that can offer training and education in relevant technology areas, including Forsyth Technical Community College and HUSTLE Winston-Salem.

By helping people overcome the obstacles in their paths and receive the training they need to participate in the new economy, the TechCareers 2020 program is the next step in Goler CDC’s vision for a more inclusive community in Winston-Salem.

“If we’re going to be the city that we say we want to be, we have to be interested in what’s happening in the entire city,” says Suggs. “We are just trying to play a role in making sure that more people get a chance to participate in the innovation economy that’s coming.”