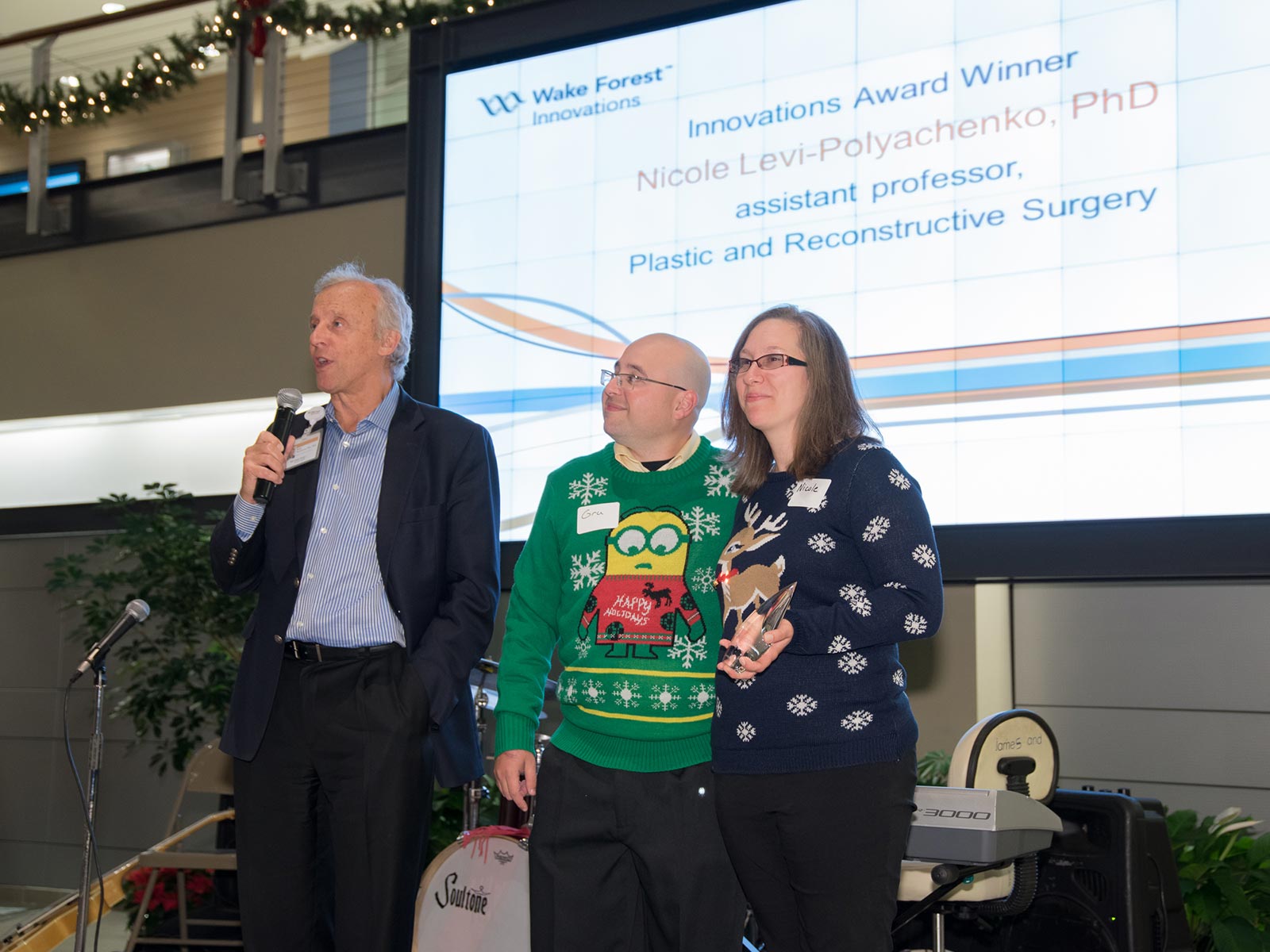 Nicole Levi-Polyachenko, PhD, originally wanted to be a nuclear physicist. To that end, she earned undergraduate degrees in physics and math and then a master’s in physics.

“But along the way I determined that nuclear physics wasn’t the most lucrative career path and that there were more opportunities to do cutting-edge work in medical research,” she says.

So she pursued a doctorate in biomedical engineering, and today, as an assistant professor of plastic & reconstructive surgery at Wake Forest School of Medicine, she’s making the most of those opportunities.

In recognition of her groundbreaking research into the use of nanoparticle-generated hyperthermia to treat disease, Levi-Polyachenko is the most recent recipient of the Innovation Award, presented quarterly by Wake Forest Innovation Quarter.

Levi-Polyachenko’s list of accomplishments includes developing a now-patented technology that employs carbon nanotubes – long strands of atoms roughly 50,000 times thinner than a human hair – to deliver both heat and chemotherapy to treat cancer. The technology evolved from a collaboration with former Wake Forest Baptist surgeon John H. Stewart IV, MD, and David Carroll, PhD, director of the Center for Nanotechnology and Molecular Materials at Wake Forest University. The aim of the technology is to treat certain types of tumors – especially those inaccessible to surgeons – more rapidly, more accurately and with less damage to surrounding tissue than other therapies.

Building on the concepts central to that innovation, Levi-Polychenko is currently involved in various stages of research into polymer-based nanotubes (more flexible and safer than the carbon models), fluorescent nanomaterials (to guide doctors during procedures and detect diseased cells) and other nanoparticles to target and treat bacterial infections such as staph and strep.

“I’m always working on the next best widget,” she says. “If a doctor challenges me to find a way to make something better, I’m never going to say no. I thrive on a challenge.”

So does Levi-Polyachenko consider herself an innovator?

“Oh, I’m just the nerd put in the right spot at the right time,” she says with a smile. A nerd helping fight cancer.

Upon further consideration, she is quick to acknowledge the role collaboration plays in the innovation process.

“I don’t think you can be an innovator by yourself,” she says. “In my case I have the appropriate education to ask the thought-provoking questions of the right people and get the knowledge needed to do something innovative.”