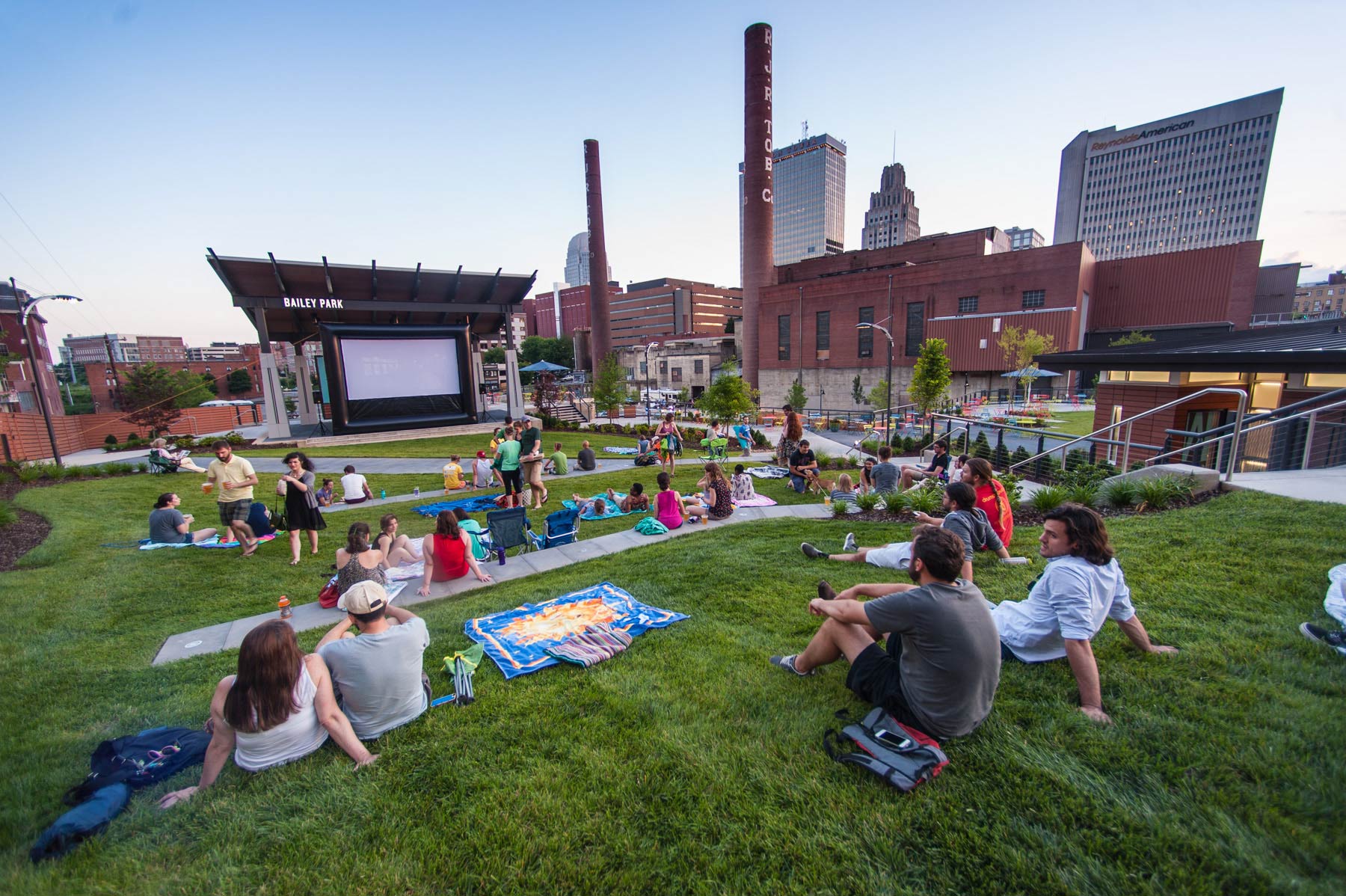 Lawren Desai was interested in starting a film series. The owner of a/perture cinema in downtown Winston-Salem, Desai admired Science on Screen, which began in 2005 at the Coolidge Corner Theater in Brookline, Massachusetts. In that series, movies serve as jumping-off points for experts to talk about science and technology in ways that engage general audiences.

“I wanted to do something like that here,” she said, “but did not really know how.”

“Lindsey and I started talking, and we eventually decided to do a series together, not just with science but to open it up more broadly to be about innovation and what is going on around here,” Desai said.

The free series – Innovation & Cinema – debuted in 2014 with three screenings at a/perture cinema. It has returned this year with a new venue – the upper lawn of Bailey Park – and a slate of six films, including three to be shown in October.

Innovation and Cinema focuses on how movies reflect the various ways innovation impacts our lives. People from area institutions are paired with films related to their work or expertise, and they explore the connections in brief pre-film talks.

How is the schedule of films and speakers determined?

“Lindsey will have groups from the Innovation Quarter or elsewhere in mind and she’ll share them with me,” Desai said. “Then I’ll come up with a list of possible films, and then it is back and forth more than a few times.”

“The idea is not to find some obscure film but rather something that people know of that fits the concept.”

To date, Innovation & Cinema has paired “I Am Legend” and Steve Mizel from the Department of Microbiology & Immunology, “The Matrix” and Nickolay Hristov from the Center for Design Innovation, “Weird Science” and Scott Gayzik from the Virginia Tech–Wake Forest University School of Biomedical Engineering and Sciences, “Gattaca” and Roger Cubicciotti from NanoMedia Inc., “Office Space” and Peter Simpson from Flywheel, “Dead Poets Society” and Lauren Rogers from Salem Academy and College and “Moneyball” and David Mounts from Inmar.

Up next is “Carmen Jones,” a 1954 musical starring Dorothy Dandridge and Harry Belafonte, to be introduced by Endia Beal, interim director of The Diggs Gallery at Winston-Salem State University, on Thursday, Oct. 8. Mullen Lowe U.S., a full service integrated advertising agency, will be introducing “Toy Story” on Thursday, Oct. 15.

The year’s series finale will be “Young Frankenstein,” the 1974 Mel Brooks-directed comedy starring Gene Wilder and Madeline Kahn, to be introduced by Kenneth Russell, director of product innovation services at Wake Forest Innovations, on Thursday, Oct. 22.

These shows will begin at 7 pm.

There has been one tweak to the format. At the first six events in the series, the speakers appeared in person. For this fall’s presentations, at Desai’s suggestion, the pre-film talks are being videotaped and shown on-screen.

Desai and Yarborough are pleased with how the series has gone so far, and they plan to develop it further.

“We’ll continue to broaden the scope of both speakers and films so the series gets bigger and better every year,” Yarborough said. “It’s a great way to involve the entire community and introduce people from all walks of life to something new in an entertaining way.

“Plus, there’s something special about watching a movie outdoors.”

Additional information about the Innovation & Cinema series is available at the Wake Forest Innovation Quarter website.