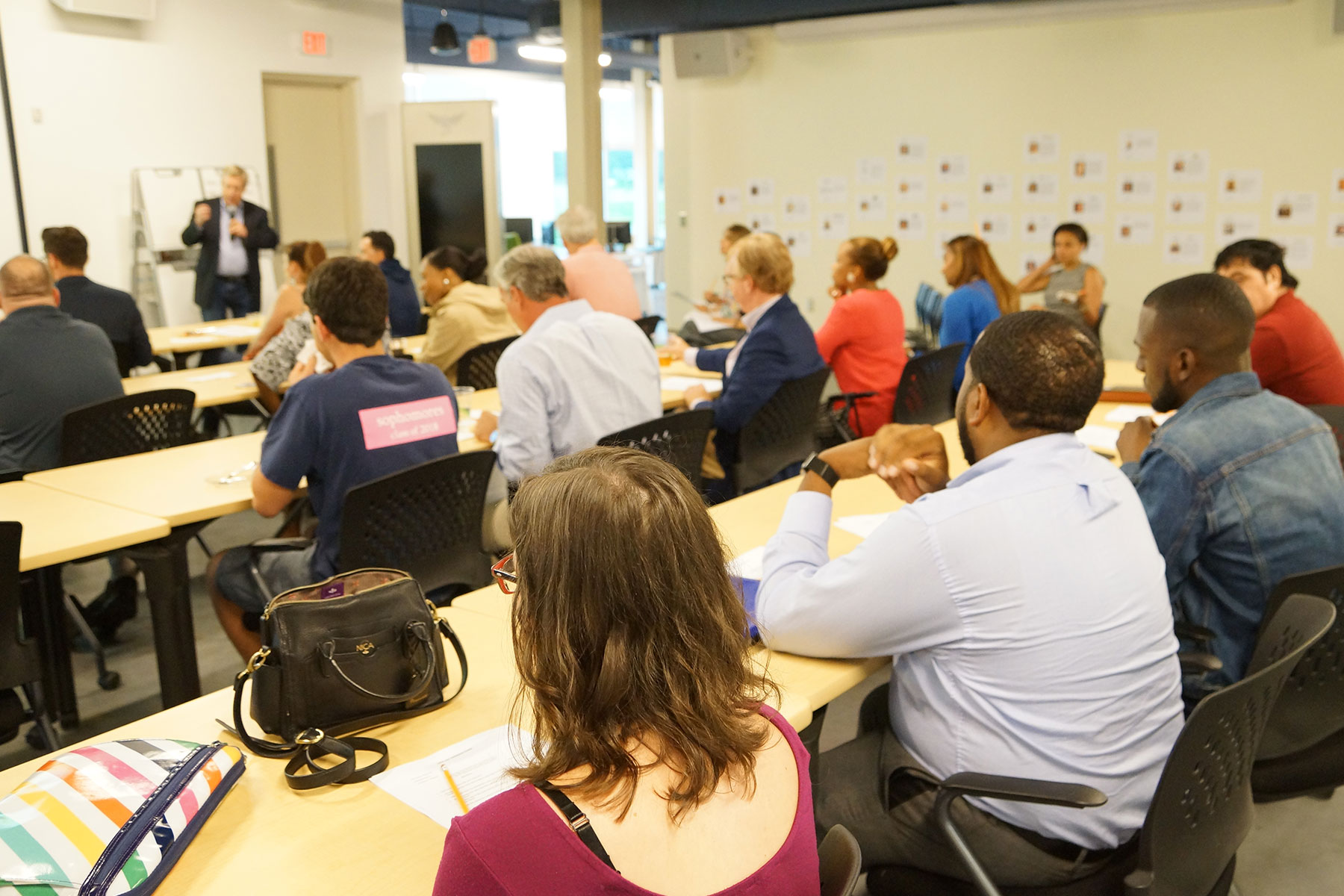 Fay Horwitt, a member of Flywheel Coworking since 2015, likes to wander. The Winston-Salem native has lived as far away as Hawaii, working as marketing manager for the YWCA of O’ahu. Moving back to Winston-Salem in 2015, she discovered that Flywheel’s new home in the  Center for Design Innovation (CDI) in the south district of Wake Forest Innovation Quarter is also great for wandering.

A hundred members of Flywheel’s community of innovators and entrepreneurs moved from 525@vine to the CDI building in the Innovation Quarter in January 2017. Each corner of the new coworking space on the second floor of CDI opens to a different view of Winston-Salem.

Fay walks around the space on a recent sunny morning.

“Over there is Wake Downtown,” she says quietly so she won’t disturb fellow Flywheel members tapping on laptops atop light-brown tables. She also points out the campuses of Winston-Salem State University and Salem College.

“For me, it’s inspirational being able to look out and see our city,’’ says Horwitt, who recently was appointed program director for Venture Café Winston-Salem. She first encountered Flywheel when she founded InnovateHER, a nonprofit initiative helping foster women entrepreneurs, in 2016.

The panorama was just part of the changes that Flywheel’s relocation brought. The move broadened the horizon for both Flywheel and CDI. As it turns out, they needed each other. Their pairing blended creativity, business creation and technology.

CDI promotes research and experiential learning in order to foster creativity and contribute to the local economy.

“There’s a host of resources here of potentially great value to both start-up companies and the other users of this space,” says Peter Marsh, partner and co-founder of Flywheel.  “CDI promotes research and experiential learning in order to foster creativity and contribute to the local economy. Those qualities are very valuable for our community.”

As an initiative of the University of North Carolina System, CDI partners with Winston-Salem State University, the University of North Carolina School of the Arts and Forsyth Technical Community College to promote economic development in the Piedmont Triad through education, research and design. It occupies the ground level of the modernistic, flat-roofed building with exterior walls resembling a gold-and-beige checkerboard.

Riding the elevator—complete with a bright yellow floor—to Flywheel’s second-level space opens to a walkway of tall windows overlooking four grassy acres surrounding CDI. Natural light streams into the workspace, which is furnished with electric blue and lime green chairs and features a fish tank. The scaly orange and blue inhabitants swim in the direction of passersby. Members love the light from outdoors, which puts a shine on the buffed concrete floors.

For CDI, Flywheel proved to be the flourishing, up-and-running enterprise that the organization was seeking as a major tenant.

“[The move] made so much sense because one of the ways to make a positive economic impact is through entrepreneurship,” says David Smith, co-director of CDI and director of sound design at the School of the Arts. “You can absolutely see CDI turning from a research center into an entrepreneurial start-up center.’’

For Flywheel member and academic tutor Brian Bannigan, ample parking at CDI makes it easy for parents to drop off and pick up children from tutoring sessions. He and his students appreciate Flywheel’s new surroundings—vibrant yet quiet space with views of the world outside.

“The views provide a mental break for pupils and teachers alike,” Bannigan says with a smile.

We’re at an early stage, but suddenly the resources of CDI are being made available to the entrepreneurial community in Winston-Salem.

Recent improvements to the physical space added walls and acoustical tiles to conference rooms, for the privacy of meetings. Some of the workspaces have been enclosed with walls, appealing to long-term members seeking a more permanent setting.

It’s so far so good for Flywheel. Its membership—currently totaling 110—has continued to grow since moving several months ago.

The move reinforced what Marsh calls “the magic in the secret sauce of Flywheel”—the community.

“There’s a shared sense of community that transcends our physical location,” Marsh says. “Everybody here is seriously engaged in either micro-enterprise or a scalable start-up concept, and the mutual support that Flywheel members get from one another is of great value.”

From Horwitt’s viewpoint, moving with Flywheel was a no-brainer. “The collective thought was, `Oh, we’re making this move together,’” she says. “We now have more family with CDI downstairs.”

The relocation to CDI is already paying off for some Flywheel members. For one, Tech Talent South, which runs coding bootcamps in technology hubs from San Antonio to Atlanta, has increased its course offerings at its Winston-Salem location since moving to CDI.

“We’re at an early stage,” says Smith, “but suddenly the resources of CDI are being made available to the entrepreneurial community in Winston-Salem.”

Bringing Flywheel and CDI together under one roof creates opportunities for collaboration between the two organizations. By pooling their resources and expertise, Flywheel and CDI are advancing their shared mission of turning ideas and technology into sustainable enterprises that create jobs and economic growth.