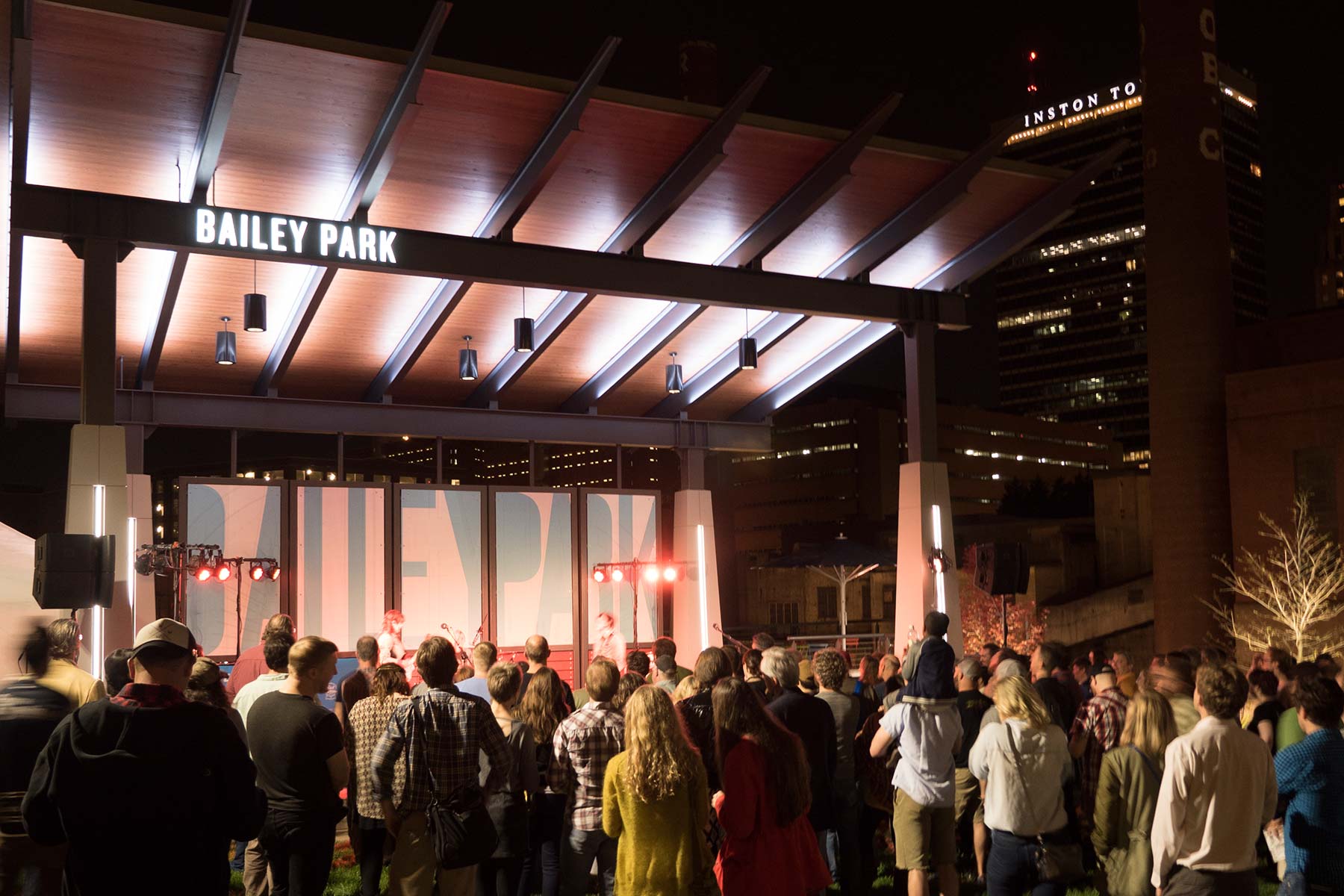 It’s a phenomenon that they cooked up right here in Wake Forest Innovation Quarter.

They are Philip Pledger and Anthony Petrovic, the phenomenon is Phuzz Phest, the place is Krankies and the conversation has an echo of déjà vu about it.

Phuzz Phest, an annual music festival that takes place in downtown Winston-Salem, was born in the very coffee shop where Pledger, the festival’s founder, sits drinking coffee—black—and reminiscing in a Poler sweatshirt.

Phuzz Phest was created to bring what Pledger calls “the vernacular arts” to the city, an endeavor that, though beginning rather spontaneously, has rooted and grown into something much bigger than he ever believed it would.

Rewind the tape six years. Pledger was working as a barista and event coordinator at Krankies Coffee. (Now he works at a creative agency in Winston-Salem called Airtype.) He was also performing with his own band, Estrangers.

“There was a gap in arts programming in Winston-Salem,” Pledger says. “This city has a long tradition of supporting the arts. We have an incredible symphony and opera, but there wasn’t much around in the more…vernacular arts,” he grins while looking for the phrase.

Pledger decided to fill that gap, so he, Petrovic and a few other volunteers assembled the first ever Phuzz Phest in 2011.

“It was pretty quickly thrown together,” he says. “We didn’t have any sponsors or anything. It was just a fun, last minute thing. We didn’t have high expectations for a turnout.”

Then 300 people showed up. So they thought, “Why not do a little more planning, get some funds and do this festival right?”

Thus was born Phuzz Phest, the premier music festival in Winston-Salem and one that has grown into a regional favorite, bringing thousands to the downtown area.

For a couple years, the music festival was an unofficial “Best of North Carolina,” featuring bands from around the state. But the festival gathered support and soon had bigger corporate sponsors—like Texas Pete—and started snaring some nationally-acclaimed talent, growing from around 20 bands to over 50 in just six years.

And this isn’t just a music festival for hipsters. Musical acts span a wide swath of genres, from your staple rock and roll bands, to groups with a folk or electronic flair. Garage pop, indie pop, dance music, R&B folk tunes and acts built specifically for live performance all find an outlet at Phuzz Phest.

That evolution of spaces is part of the beauty of Phuzz Phest. Pledger and the other festival organizers wanted to deliberately highlight the urban landscape of Winston-Salem, and holding an annual event allowed them to showcase how that landscape changed.

“A lot of festivals charge you $300 to stand in a field with a thousand other super-sweaty people. That doesn’t sound fun to me at all,” he says with a smile. “We’ve embraced the evolving urban spaces in Winston-Salem.”

Now taking place in venues across downtown, the Phuzz Phest events are held at several locations, like the Millennium Center, while still showing at the original music festival locations, like Krankies and the Garage. And last year, Phuzz Phest started hosting events in Bailey Park in the Innovation Quarter.

“Spaces like Bailey Park are crucial for having a downtown community,” says Pledger. “Green spaces are rare.” This year Bailey Park’s involvement with Phuzz Phest expands: acts will play there on both Friday and Saturday.

The events of Phuzz Phest keep growing, too. Non-musical events—like community bike rides and free yoga in Bailey Park—help cultivate the festival vibe. This year, special events include a panel discussion on “Building and Sustaining a Music Community” moderated by Eddie Garcia of 88.5 WFDD at the Center for Design Innovation, as well as a coffee conference accompanying the documentary, A Film About Coffee.

Despite the festival’s growth, Pledger and his other Phuzz Phest founders are very intentional about keeping ticket prices low. They’ve been putting on this show for six years now with nothing but help from volunteers. For some, it’s almost a second job, but they’re music fans and they see value in live music.

“Phuzz Phest is rare because it’s extremely grass roots and it just keeps growing,” says Pledger. “For us, keeping ticket prices low is a social duty. This festival is not a political or humanitarian endeavor, but we don’t want it to become inaccessible.”

“Live music is so valuable,” he continues. “Performance in today’s society—,” he stops himself. “I don’t want to make any grand statements,” he laughs, “but it’s a special experience being in a room together with other people, having a shared musical experience. There’s not a lot of things like it.”

That seems to be the bottom line for Pledger. Making music accessible.

Pledger remembers long summer shifts as a barista just a few years ago. He remembers listening to bands like Neon Indian to pass time. Now that group is one of the headliners of Phuzz Phest 2016.

He hopes people come to Phuzz Phest and discover new bands, groups that will shape new musical tastes. After all, the “vernacular arts” are for everyone. It’s in your backyard April 15-16. Come explore.