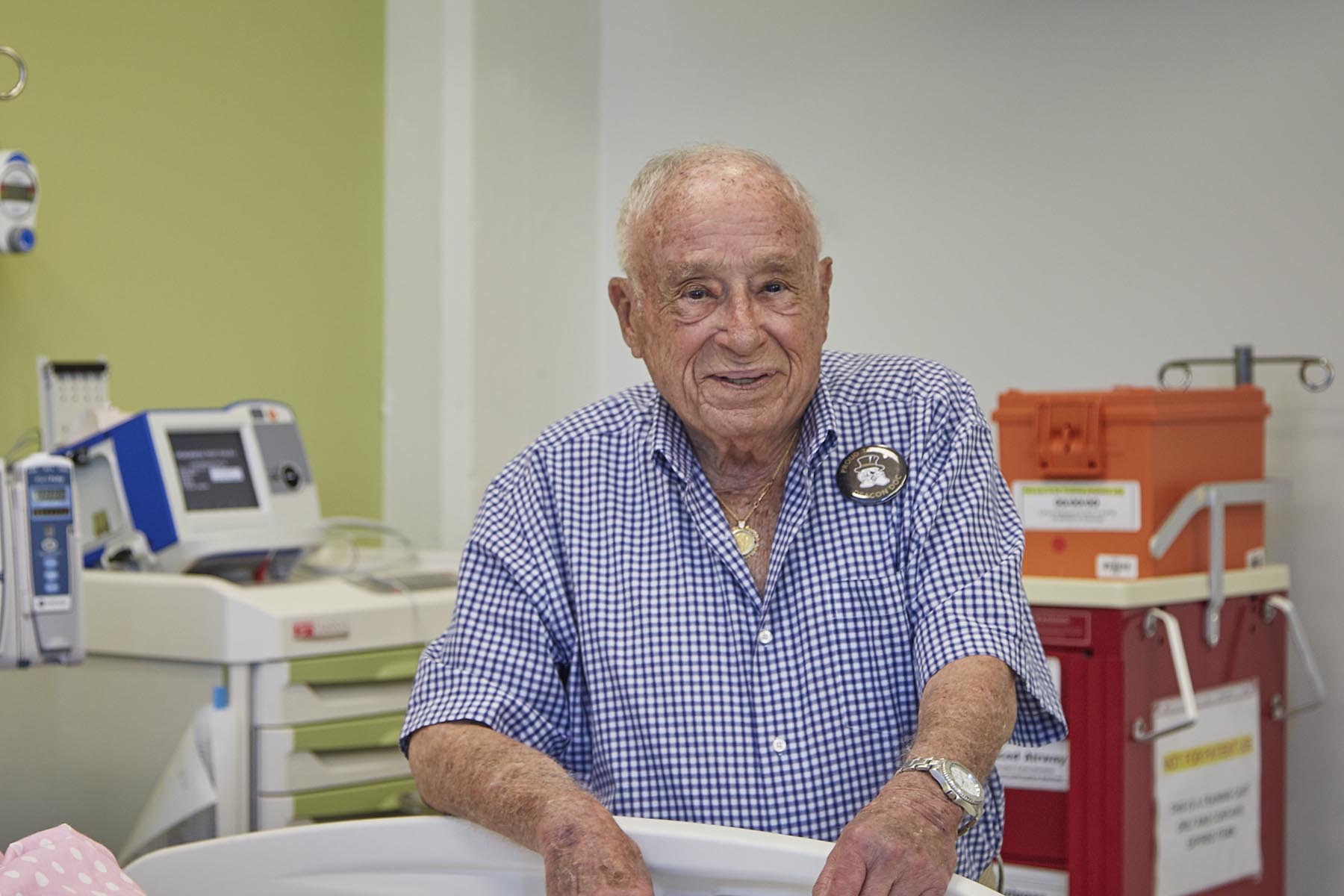 In the mock operating room, brilliant surgical lights illuminate a patient simulator—a medical manikin that mimics human reactions to events like cardiac arrest, surgery or delivering a baby—laying in a hospital bed.

Carts with various kinds of medical equipment and large television screens with a live video feed of the room flank the bed, located on the fourth floor of Wake Forest School of Medicine’s newest facility for medical students, the Bowman Gray Center for Medical Education in Wake Forest Innovation Quarter.

A steady voice emerges above the din of activity.

“During my training, we didn’t have simulation. We practiced on each other,” says Edgar Marks, MD. The 94-year-old former physician stands next to the bed, examining the state-of-the-art simulators while sporting a “Proud to Be a Deacon” pin.

“We didn’t even have plastic,” he says with a grin. “All our equipment was made from either rubber or glass.”

The School of Medicine has built its reputation as a leader in advancing excellence in medical education, since its founding in 1902 to Marks’ education in the 1940s and now through this latest milestone.

When the School of Medicine opened in 1902, it was one of only 11 medical schools in the country that required two years of college for entrance, demonstrating the school’s dedication to excellence in academic and clinical education. After the move to Winston-Salem, the School of Medicine became only the second four-year medical school in the state.

Even when Marks was in school, the School of Medicine was instituting cutting-edge curriculum changes.

“When I started medical school, Wake Forest was one of the first to begin teaching its curriculum one subject at a time,” remembers Marks. On his tour, he has stopped by a fair for the incoming class—the new medical students started school only days before. A crowd of the eager students gather to hear the physician reminisce about his education.

“My first class was anatomy,” Marks tells them. “It was in a classroom on the fourth floor.”

“Our first class is anatomy!” says one student.

“And it’s on the fourth floor,” another points out.

“But guess how much medical school cost when I was in school,” Marks teases the gathered students.

Guesses ring out, but none of them are prepared for the real number.

“I paid $450 a year for tuition,” says Marks. He grins at the stunned silence.

Marks points out other areas that have changed since he was a student to the gathered MD hopefuls: his classrooms didn’t have air conditioning, his class sizes were smaller and they had fewer treatments for many diseases.

“Also, there was only one female student in my medical school class,” says Marks.

Today, many of those conditions have changed. Students at the School of Medicine receive training in cutting-edge medical education skills and techniques, the Class of 2020 boasts a historic number of women among its members and almost 20% of the incoming class are minority students considered underrepresented in medicine.

These differences also illuminate the connections between Marks and the incoming class. From the class of 1945 to the class of 2020, the School of Medicine continues to dedicate its resources to training exceptional clinicians and researchers, exemplified by this new building, which was designed around state-of-the art simulation labs and classrooms that move medical education into the 21st century. However, the passion of the faculty, alumni and students transcends the generations that separate them and unite them in their mission to improve the lives of patients.

“It’s amazing how advanced everything is. The computers and video that are available and the techniques that are done now—they are so different from back then,” says Marks. “But I think the main thing that doctors should do is interact with their patients. And I was taught that at Wake Forest.”

This patient-centered perspective is one characteristic of medical education at Wake Forest School of Medicine that continues through each generation.

Check out the School of Medicine’s video about Dr. Marks’ visit.