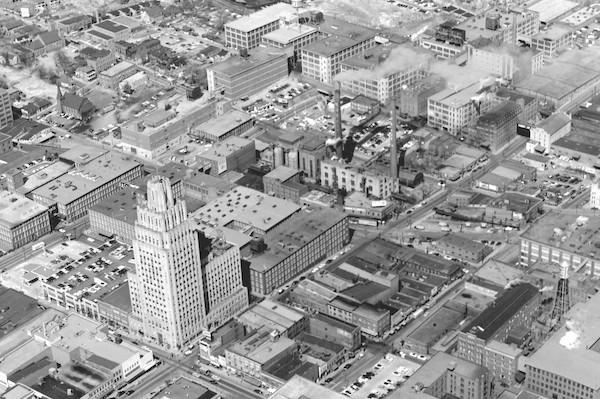 Since opening its doors in 2003, Krankies Coffee has become a pillar of Winston-Salem’s burgeoning downtown and Innovation Quarter scene. Located at the corner of East Third Street, or what has affectionately become known as the “Krankies Block,” this coffee shop and its eclectic mix of offerings is a favorite among locals and visitors alike.

But while Krankies and other tenants bask in the success of today, it’s important to note that they’re standing on the broad shoulders and vision of those who came before them. Those community members—many who were once enslaved or a generation removed from slavery—were authoring a legacy. They possessed a vital drive that was an important component of their lives and led others to start businesses, plying skills and trades learned or passed down. Clothiers, meat wholesalers, grocers and other services planted roots and flourished here, setting a tone for others to follow.

The Winston-Salem Tobacco Historic District is considered by many to be the launching pad for the region’s rich Black history. Tobacco was king, and seemingly overnight, an astounding 39 tobacco factories sprung up with R.J. Reynolds Tobacco Company leading the way. 1 Many came to the towns of Winston and Salem seeking opportunities outside of agriculture. The attraction of factory work largely accounts for Winston and Salem’s Black population boom, which increased 216% between 1880 (1,482) and 1890 (4,687). 1

A Closer Look at the Krankies Block

From the 1900s through the 1960s, a diverse mix of commerce planted in Winston-Salem can best be described as a business melting pot. Food, fashion, textiles and beyond, this incredible area played home to all of those and more. Although occupying a small physical area, the Krankies Block held a significant role in the commercial district that developed in and around the R. J. Reynolds factory site.

Before social media came on the scene, establishments like barbershops, beauty shops and salons were social media, ensuring everyone knew who was hiring or whose baby had taken their first steps. Despite the myriad of today’s digital platforms designed to keep the world connected, these shops still stand as trusted communications sources—thanks largely to the legacy of places like F.C. McCall and Delight Barbershop. Once fixtures on East Fourth Street, these two faithfully served customers for a combined three decades, styling the hair of men and women. At a time when well-groomed, well-dressed appearances counted for a lot, those looking to get their clothes cleaned, pressed and repaired could join Black-owned Busy Bee Pressing Club.1

No city block is complete without a good place to eat, and there was no shortage on Fourth Street. When R.J. Reynolds Tobacco Company was the primary employer, Harry’s Café served as the lunch and dinner destination of choice for workers. Although it changed names several times throughout the mid-1900s, the restaurant maintained a presence on East Fourth Street, eventually becoming the OK Lunch in the early 1950s.1

If you needed something crated, packed, hauled, shipped or moved, you depended on the capable hands of the Black-owned Jackson Transfer Company. The company opened for business in 1934 on North Patterson Avenue and was running full-page advertisements in the city directory. These records indicate that Jackson Transfer Company appeared to remain in business until at least 1959. 1

Depot Street: A Strong Foundation for Enterprise and Education

One of the central veins running through that area was Depot Street, known today as Patterson Avenue in the Innovation Quarter. Many of the employees who worked at the R.J. Reynolds Tobacco plant lived in the Depot Street Neighborhood. While factory workers were a central part of the neighborhood, several Black doctors, lawyers, and bankers also proudly called Depot Street their home.

The 1880 federal census reports that 79.6% of Winston’s tobacco workers resided within a twenty-one block area bordered by Main, Seventh, Depot and Belews Creek streets.1 Many strategically leveraged the traffic of Fourth Street to make their small business dreams a reality, serving a community that did not have access to most public facilities and services due to segregation. The Depot Street neighborhood became the epicenter of the Black community. Black-owned furniture stores, funeral homes, dry cleaners, pressing clubs, tailor shops, pharmacies, watch repair shops, shoe hospitals, florists and dentist practices were established.

The Depot Street Neighborhood was also home to1:

A Transportation Success Born from Segregation

Mass transit arrived in Winston-Salem in the 1920s. Black-owned Safe Bus Company served the community’s needs, helping Black citizens get to and from their destinations on time. Depot Street was home to their dispatcher’s office. Inside those walls, dispatchers coordinated pickups and drop-offs and ensured that 80 drivers were in place and on time when carrying their 8,000+ daily passengers. Safe Bus wasn’t just a name—it was a promise made to then-mayor Thomas Barber to operate in a safe, organized manner.

At one point in the late 1960s, Safe Bus was the largest Black-owned and operated transportation business in the world. The company would later get purchased by the Winston-Salem Transit Authority, with its assets and routes integrated into the WSTA system in 1972.2

The Rex Theatre and a Work Hard, Play Hard Mentality

Though public entertainment options were sparse for Black people in the 1900s, the Rex Theatre opened its doors in 1912 as a reprieve for many. It likely had a broad selection of films that no doubt rivaled any other theatre in the city; however, the live entertainment kept the crowds coming. The theatre attracted talents from all over the country, including stars like Cab Calloway, bringing a lighthearted joy and balance to the community.1,3

Today, the Innovation Quarter embodies so many qualities that made this section of Winston-Salem a truly special place. Just as decades ago, when many came looking for jobs and a new life, the Innovation Quarter is still bursting with opportunity. Businesses of all types have settled in this area to experience growth and success bolstered by a welcoming and supportive community. But more essential than any transaction is the beautiful innovation district that continues to evolve into an inclusive ecosystem where diversity, equity and the pursuit of life-changing innovation are at the very core of life.

Impact, Influence, Inspiration: The Global Network of Innovation Districts & Our Role as a Member

How Winston-Salem is Becoming a Hub for Regenerative Medicine

What if life-saving treatments didn’t depend on the availability of donor organs or finding a compatible match? What if we could renew the functionality of dysfunctional or diseased cells, tissues…

Regenerative medicine companies are transcending the limits of what we previously thought was possible—and some are even doing it in our backyard. The Innovation Quarter has become a growing hub…