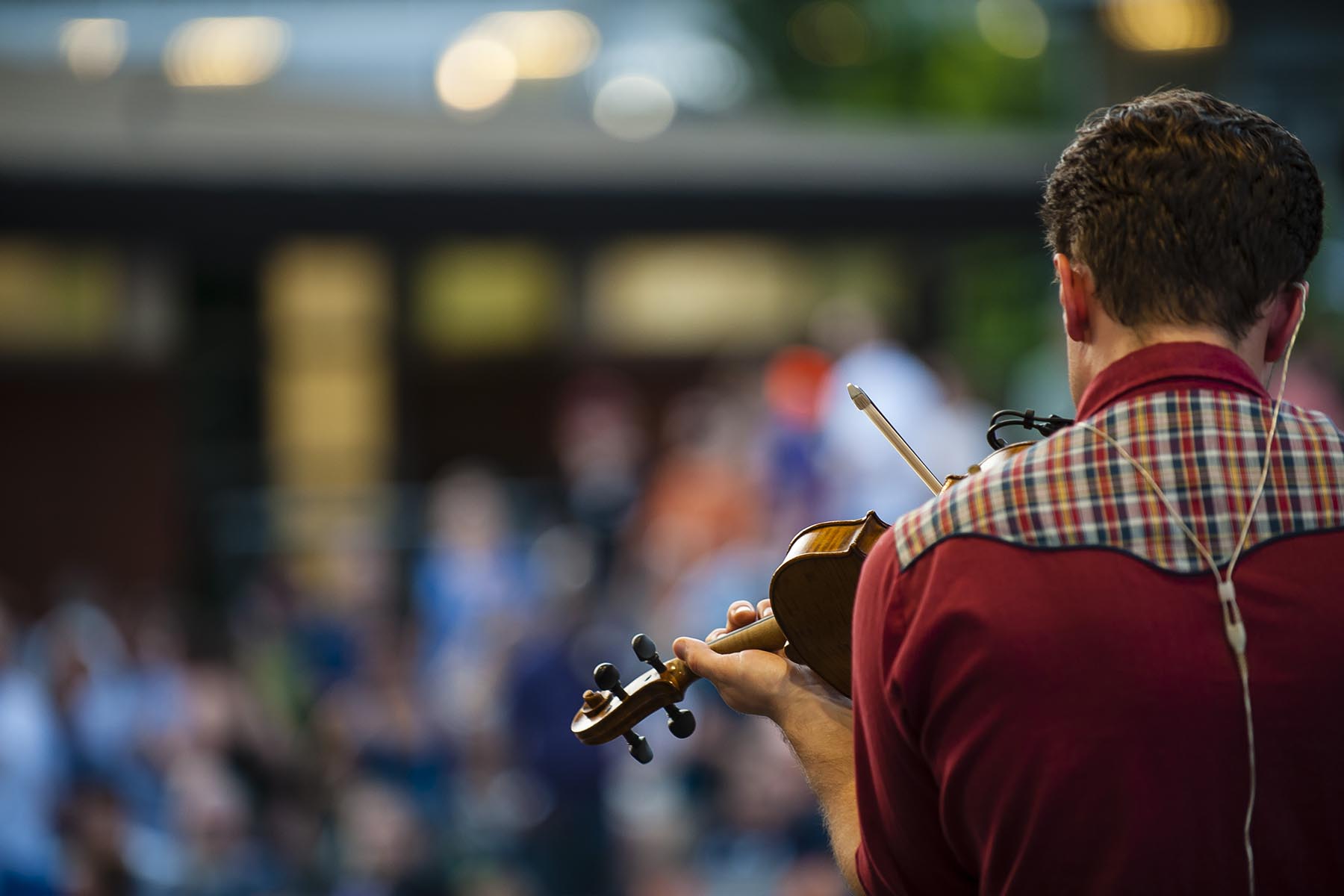 When Richard Emmett walks the streets of downtown Winston-Salem, his mind looks past the present landscape and sees shades of the past. Before Trade Street was the Arts District, it was known as Old Town Street, and it drew rural farmers into town to sell their crops, specifically tobacco, at the city’s many tobacco warehouses.

Between the corn and tobacco, musicians would take up a spot, particularly old-time string bands hoping to gather a crowd from the streets. Artists like Ernest Thompson and the North Carolina Cooper Boys made their start here and in other corners of North Carolina before finding the limelight.

They filled Winston-Salem’s streets with music distinctive of this region—a little-known history that Richard, program director for the Blue Ridge Music Center, works to preserve.

The decades since have brought waves of change to the area. In the wake of downtown revitalization and the growth of Wake Forest Innovation Quarter, Richard is reviving Winston-Salem’s street-music roots. When Lindsey Yarborough, director, community relations at the Innovation Quarter, approached Richard about partnering with the Blue Ridge Music Center to bring more blues and bluegrass acts downtown, they joined efforts to create Bailey Blues & Bluegrass, a new music festival at Bailey Park that’s bringing a fresh generation of soul to an old-time tradition.

“I did the research and there are a lot of blues and bluegrass bands that perform in the area, but there wasn’t anything specifically in downtown Winston-Salem that catered to that audience. I thought there was a unique opportunity to bring a blues and bluegrass-themed event to Bailey Park.”

Lindsey had the idea to create a two-part music series for the 2016 season, with installments in the spring and fall. The event would be free, open to the public and blend the genres of storytelling, blues and bluegrass, unlike any other event currently offered in Winston-Salem.

Lindsey’s vision aligned perfectly with Richard’s passion and the two teamed up to launch the series. Richard couldn’t pass up the opportunity for the Blue Ridge Music Center to sponsor the event. A national park facility with an award-winning museum and a 3,000 capacity outdoor amphitheater on the Blue Ridge Parkway near Galax, VA, the Blue Ridge Music Center is dedicated to celebrating and preserving the history of Blue Ridge music and musicians, a mission close to the heart of Bailey Blues & Bluegrass.

“I think what was really exciting about the first event was the overwhelmingly positive response that we saw,” says Lindsey. “We had a great turnout and a lot of enthusiasm and support from our community.”

If you’ve ever enjoyed any of these places, spaces and events, you have Richard to thank (at least partially). Dubbed an official music aficionado, Richard has been a staple in the Winston-Salem community and has helped launch much of the downtown, outdoor music scene.

These days, he splits his time between Winston-Salem and the Blue Ridge Music Center, where he curates all of the center’s performances, working with artists like The Steep Canyon Rangers, The Carolina Chocolate Drops and, most recently, an all-star band featuring Alison Krauss, Jerry Douglas, Ricky Skaggs and The Whites. Richard now brings this role to Bailey Blues & Bluegrass.

“What I always try to do is bring in a national act to pair with some local folks and highlight the talent we have here. That way people who come out for the national headliner also get a taste for the local talent we have.”

Richard’s line-up for the festival’s fall debut on October 7 will not disappoint. For the opening act, Greensboro native Roy Roberts and Quest Blues Band will take the Bailey Park stage. Roy Roberts’ sound is likened to that of Solomon Burke and Jimmy Reed and he and his five-piece band promise to bring every shade of blues.

Mike Farris, 2015 Grammy Award-winning artist and 2008 Americana Music Association New/Emerging Artist of the Year, will headline the show with the Roseland Rhythm Revue.

“Mike Farris is a former rock and roller who completely reinvented himself,” says Richard. “All the songs Mike sings have that deep, spiritual feel, like Al Green or Otis Redding.”

But he hasn’t lost his original beat. Those “rock and roll” sounds are bringing a new energy to traditional soul music.

A Revival of Old-Time Soul

As much as Bailey Blues & Bluegrass pays homage to a steep history of old-time music, it is also reviving a new generation of soul, thanks in part to its venue.

“Bailey Park is grounded in the space of Winston-Salem’s former tobacco district but is part of this new, driving energy that comes with innovation,” Lindsey explains.

“I see innovation as taking something old and making it new again until you create something with a contemporary flavor that still has a thread to the past,” says Richard.

Bailey Blues & Bluegrass looks to do just that. Looking toward the future, Lindsey and Richard hope to continue the free series.

Stay tuned to find out.