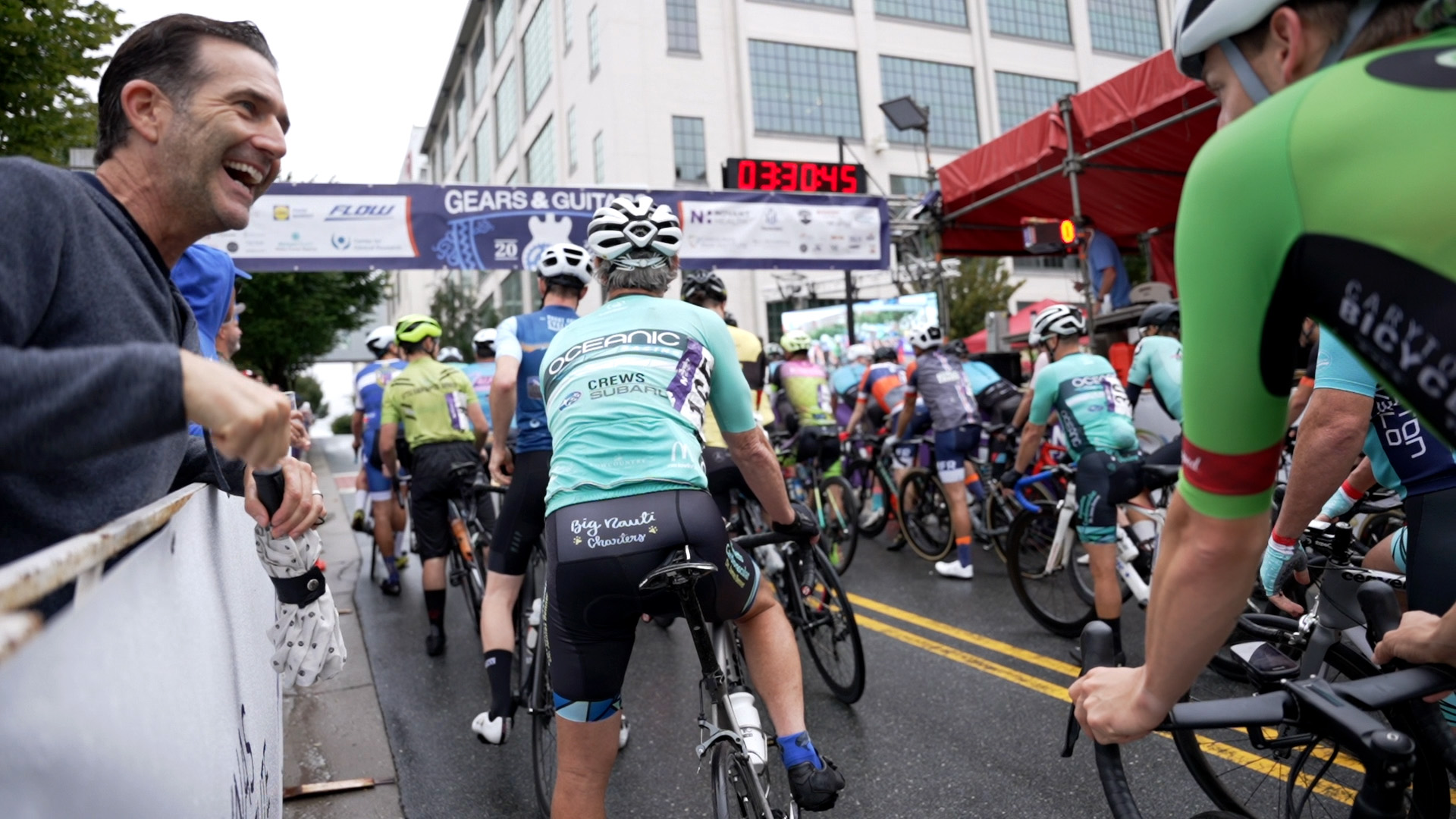 If you’re an avid cyclist, you may know Gears and Guitars as one of the top criterium race routes on the circuit. If you’re not, you may know it as a weekend of concerts and fun in Winston-Salem. But if you’ve never even heard of Gears and Guitars, well, you’re missing out on a dynamic, vibrant event that’s helping to invigorate downtown Winston-Salem and bolster community engagement.

Dubbed “the biggest party on two wheels,” Gears and Guitars has lived up to its moniker for yet another year. As the event continues to grow, so does its impact on the Winston-Salem community.

An Event Designed for the Community…

“Adding the free concert was a way to give back to Winston-Salem for years of support,” Ray Boden, Event Director of Gears and Guitars, said. “All of the sponsors like Lidl, Flow Automotive, Atrium Health and others make that possible. We just wanted to see people come and enjoy themselves.”

Keeping downtown Winston-Salem as the epicenter of the three-day event was an intentional decision for event organizers and the community. Boden cites support from organizations like The Downtown Winston-Salem Partnership as a key factor in maximizing the event’s impact on the downtown community and businesses. This year’s new Streets of Fire racing event was held on Fourth Street between Spruce and Liberty Streets.

“We wanted the restaurants and bars there on Fourth Street to benefit some from us coming back downtown,” Boden said. “I know it’s an inconvenience to close the street. So when we close the street, we’re also putting a couple thousand people on that street right outside a business door.”

Both Boden and Mark Owens, President and CEO of Greater Winston-Salem, Inc., recognize the effort it takes to orchestrate an event like Gears and Guitars, which won a 2021 “Downtown Excellence Award” from the Downtown Winston-Salem Partnership. Cooperation among groups like the City of Winston-Salem, the Winston-Salem Police Department, corporate sponsors and downtown tenants is essential to ensuring the event can go on—rain or shine. The relationships among these entities not only make it possible for the city to host events of this caliber, but they’re also what makes the city of Winston-Salem so special.

“It’s a team effort, and collectively, we can showcase our community in a unique way. The design of Gears and Guitars is what makes it special. The easier path is to host a bike race out of town and out of the way,” Owens said. “By encompassing all of downtown, it really makes it a destination. People can come and watch the race. They can walk up and down, see all their favorite shops and have multiple things to do while they’re here.”

“The design of Gears and Guitars is what makes it special. The easier path is to host a bike race out of town and out of the way. By encompassing all of downtown, it really makes it a destination.” —Mark Owens, President and CEO of Greater Winston-Salem, Inc.

Shining an International Spotlight on Winston-Salem

Although inviting international teams adds some logistical complexity (involving formal letters of invitation, travel visas and approval from the U.S. State Department), Boden acknowledges how important it is for these riders to have an opportunity to compete at such a high-caliber event. Having teams from around the world participate also gives fans a chance to celebrate and engage with athletes from their home nations.

“There’s quite a bit of diversity in the race now because we have so many international athletes,” Boden said. “There’s a team from Medellin, Colombia this year. There are also Colombians that live in our community that want to meet the riders. They want to ride with them and wave their flag.”

Gears and Guitars not only strengthens ties among Winston-Salem’s international community but it gives Winston-Salem a chance to step into the limelight on a global stage. The Innovation Quarter’s robust technology infrastructure puts live-streaming tools at the event organizers’ fingertips. Boden knows that while it may not be immediately apparent, there’s something to be said for having Winston-Salem show up on screens in Italy, Japan and France.

In years past, the event and concert have drawn attendees from around the country. Ticket sales indicated that more than 50% of concert-goers were from non-local zip codes. Some even traveled from as far as Alaska to attend. It was difficult to track similar metrics during the 2022 event, given that the entire weekend’s events were free and open to the public; however, plenty of anecdotal evidence supports Gears and Guitars’ impact on Winston-Salem. Jason Thiel, President of the Downtown Winston-Salem Partnership, knows that the event contributes to a sense of community pride.

Boden doesn’t discount the impact of the cycling community either. Not only does the criterium race circuit have a dedicated fan following, but he’s also found that the cycling community is a demographic likely to return to the city again. Thanks to Winston-Salem’s ideal cycling topography, top-notch facilities and dynamic food scene, cyclists are coming back to the area to train and enjoy other events.

Injecting money into the local economy has a measurable impact on the community, but in terms of event performance, Owens has another idea for measuring success.

“When I’m looking at what makes an event successful, I look at the faces of the families and the people attending. What kind of time are they having? Are they smiling? Are they able to engage?” Owens said.

No matter how you look at it, the simple truth about Gears and Guitars is that it offers a unique way to experience Winston-Salem. People come for a concert or race, but they’re also exploring downtown, stopping at their favorite restaurant or discovering new ones. The convergence of music and cycling in the middle of a city pulsing with activity creates a permanent buzz that says there’s always something great going on in Winston-Salem, and you don’t want to miss it.