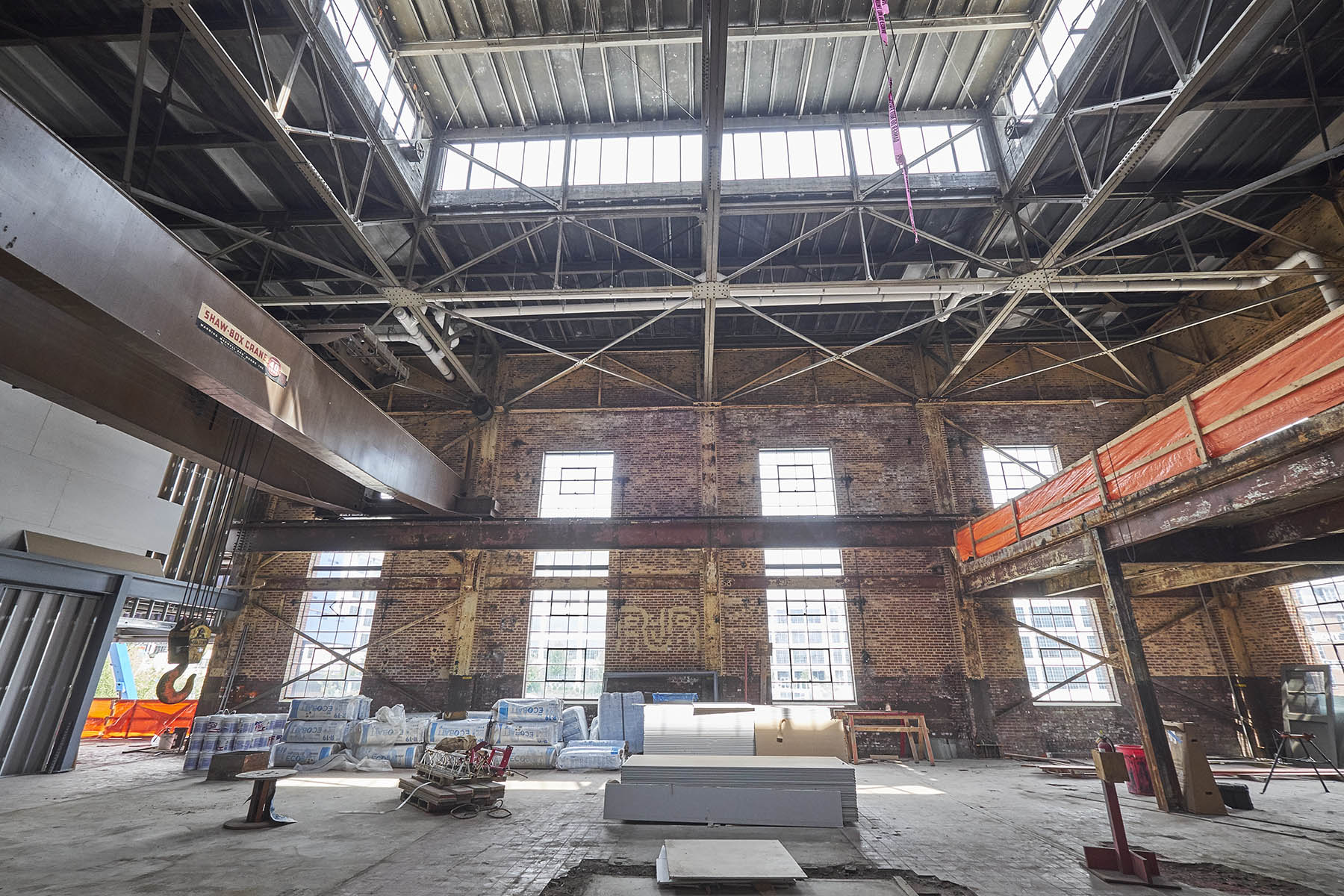 Local restaurateur Claire Calvin imagines when construction crews at Bailey Power Plant are gone. Instead of the rumbling and grinding of excavators, she hears the buzz of crowds from cycling races, concerts and the growing number of events at Bailey Park.

As people mill around Wake Forest Innovation Quarter, some will grab a table at Calvin’s new venture, Alma Mexicana, drawn to the shaded patio of her street-level restaurant in Bailey Power Plant. Some will be enticed inside to try Calvin’s modern take on Mexican cuisine.

Alma Mexicana will be among the first tenants to fill Bailey Power Plant when it reopens in January after four years of planning, demolition and rebuilding. As the first building in the Innovation Quarter designed to blend both social and work environments and strategically positioned near Bailey Park, Bailey Power Plant has been called the future “heart” of the innovation district.

With its mix of spaces and range of tenants from new companies to historic institutions, Bailey Power Plant is bringing together people with diversity and experiences from different sectors, ages and backgrounds. While the announced tenants are just a part of all future tenants, they do represent—floor by floor—the maturation of the Innovation Quarter’s mission to create an ecosystem for innovation while also promoting the district as a vibrant community where people come to work, live, learn and play.

Although not Calvin’s first business, Alma Mexicana—“Mexican soul” in Spanish—is a completely fresh concept built to fit the growth of Winston-Salem. The restaurant was inspired by Calvin’s travels in Mexico, where she discovered the subtle complexity found in Mexican cuisine.

“There are many layers to Mexican cuisine, and I wanted to explore a modern take on the essence of what it offers in this new restaurant,” says Calvin. Her modern-yet-historic concept mirrors the very renovation of the building where the restaurant will reside—a historic powerplant with a modern purpose.

Calvin plans to open Alma Mexicana in January, four years after starting The Porch, a casual Tex-Mex spot in Winston-Salem’s West End that is beloved by both locals and visitors to the City. Her vision for her new location, with seating for 50 inside and 25 outdoors, is more upscale. The menu will feature favorites of the Porch’s patrons such as rice bowls and salads, as well as new items that will appeal to the busy downtown lunch crowd. As the sun drops behind the city skyline, the scene will shift to a trendy, modern Mexican fare of shared plates of fresh guacamole, grilled meats and craft cocktails.

Calvin picked the Innovation Quarter to open her new business because she was attracted to the growing number of people working, living and socializing here. As she starts a new business, with its risks and possible rewards, she believes the district will become an A-list destination as other dining and entertainment spots open in and around Bailey Power Plant.

“More people are coming here as more things are going on,’’ Calvin says. “We are excited because we are going to be right in the middle of it.’’

The windows behind Karen Barnes let a flood of light through the two smokestacks just outside. As Venture Café Winston-Salem’s executive director looks from a third floor balcony over the vast second floor of Bailey Power Plant, she sees more than the construction equipment and materials. She sees the biggest—and most interesting—living room in the Triad.

“We’re going to fulfill our mission of connecting people by being a community living room,” Barnes says. “It’s about relationships and one-on-one conversations. You come as you are: ready to share your successes and failures, to give and receive and see how creative collisions can spark new possibilities.”

Venture Café Winston-Salem is relocating to its permanent home from nearby Wake Forest Biotech Place. The program will be housed on the second floor in Turbine Hall.

The unique space will be the backdrop of Thursday Gatherings, Venture Café’s signature programming that connects local innovators and enthusiasts.

“We want our new space to be synonymous with innovation and entrepreneurship in all their forms,” Barnes says.

Complementing Venture Café in that mission, Turbine Hall will house private offices, suites and workspaces for rent to entrepreneurs and growth-stage companies, as well as established companies looking for a fresh venue to collaborate on cutting-edge projects.

“Once you’re beyond the walls of the traditional corporate office setting, you have more opportunities to think outside the box,’’ says Will Partin, Wexford’s senior director for development, tasked with developing the Bailey Power Plant. “This project will bring together entrepreneurs and established corporations that can learn from and grow with each other.”

The combination of Turbine Hall and Venture Café on this floor bridges the gap between the entrepreneur and the growing company. It also provides space and resources for mid-size companies that aren’t quite ready for a full tenant suite. Opportunities are also being explored around the creation of a business center aimed at increasing diversity and supporting an inclusive entrepreneurial ecosystem in the Innovation Quarter.

Third Floor: The Promise of Proximity

When Mark Gunyuzlu surveys the yet-to-be-completed third floor space where CML Microsystems will be relocating, he thinks of the people who will soon be filling it—the engineers and other employees of CML Microsystems. The president of the semiconductor manufacturer envisions the connections made over handshakes and through conversations with tenants and visitors of Bailey Power Plant taking place in the building and Bailey Park just outside the company’s windows.

These opportunities for collaboration drew CML Microsystems to relocate to the Baily Power Plant. As the North American headquarters of U.K.-based CML Microsystems Plc, the Winston-Salem unit has grown rapidly during their time in the city of arts & innovation. Gunyuzlu and his team saw the Innovation Quarter as a great place to keep growing the business.

“We’re excited to be there because we think that the business climate will be healthy for our company,’’ Gunyuzlu says. “It’s an up-and-coming area with a lot of knowledgeable workers. We’re looking to be closer to other technology-related firms and the sharing of ideas that comes from that proximity.”

CML Microsystems designs and manufactures semiconductors for the global telecommunications sector and controllers for high reliability flash memory storage devices, fueling growth by developing products internally and through acquisitions. As growth from acquisitions spills over into the U.S., the company’s space in Bailey Power Plant can accommodate additional employees.

“We are excited for our new space,” says Gunyuzlu. “It overlooks Bailey Park and can accommodate all the growth that we hope to see in the next few years.”

Relocating to Bailey Power Plant also presents the possibility that CML Microsystems will find opportunities to do business with other companies there, illustrating how established companies can benefit from the Innovation Quarter’s culture of innovation.

Fourth and Fifth Floors: Experimenting with the Established

Wake Forest Innovations will be moving about 40 of its employees, who are currently located across Winston-Salem, into a single workspace.

“The way people work and interact is changing rapidly,” says Tomlinson. “This new work space in Bailey Power Plant will reflect our commitment to collaboration and become an incubator for promoting teams embracing open communication and working cooperatively.”

The fifth floor, where the Wake Forest Innovations team will reside, is structurally ideal for an open office. As the top floor of the building, it contains two clear stories that extend up to 24 feet high to let in light and create the impression of even more space. The furniture and conference rooms will be a mix of collaborative spaces with differing functions to match the way that employees work.

“We’re excited for being intentional in how we interact with our physical space and with each other,” Nolan says.

With Wake Forest Innovations and groups from the School of Medicine occupying the top two floors of Bailey Power Plant, Wake Forest Baptist will be representing some of the established organizations in the Innovation Quarter, while also putting a new spin on traditional office culture.

Bailey Power Plant: Bringing It All Together

While the highlighted tenants represent a significant portion of the building, office and retail space are still available for lease before the first tenants arrive in early 2018.

“We have great expectations,” says Tomlinson. “We will see a place bustling with activity whether it be in terms of retail and entertainment or the creation and acceleration of businesses.”

“One of the things that we’re hoping for Bailey Power Plant is that companies, insitutions of higher learning, schoolchildren and others will use it as a giant innovation lab. That’s the kind of thing I would love to see happening at Bailey Power Plant—for it to be truly fueling and propelling the innovation economy.”

The rebirth of the Bailey Power Plant is symbolic, highlighting Winston-Salem’s shift from old industry to a knowledge-based economy. More broadly, as the space begins to fill, it becomes a shining example of how work and recreation, start-ups and established institutions and other varied groups collaborate with the promise of growing Winston-Salem’s economy and building a more vibrant community.