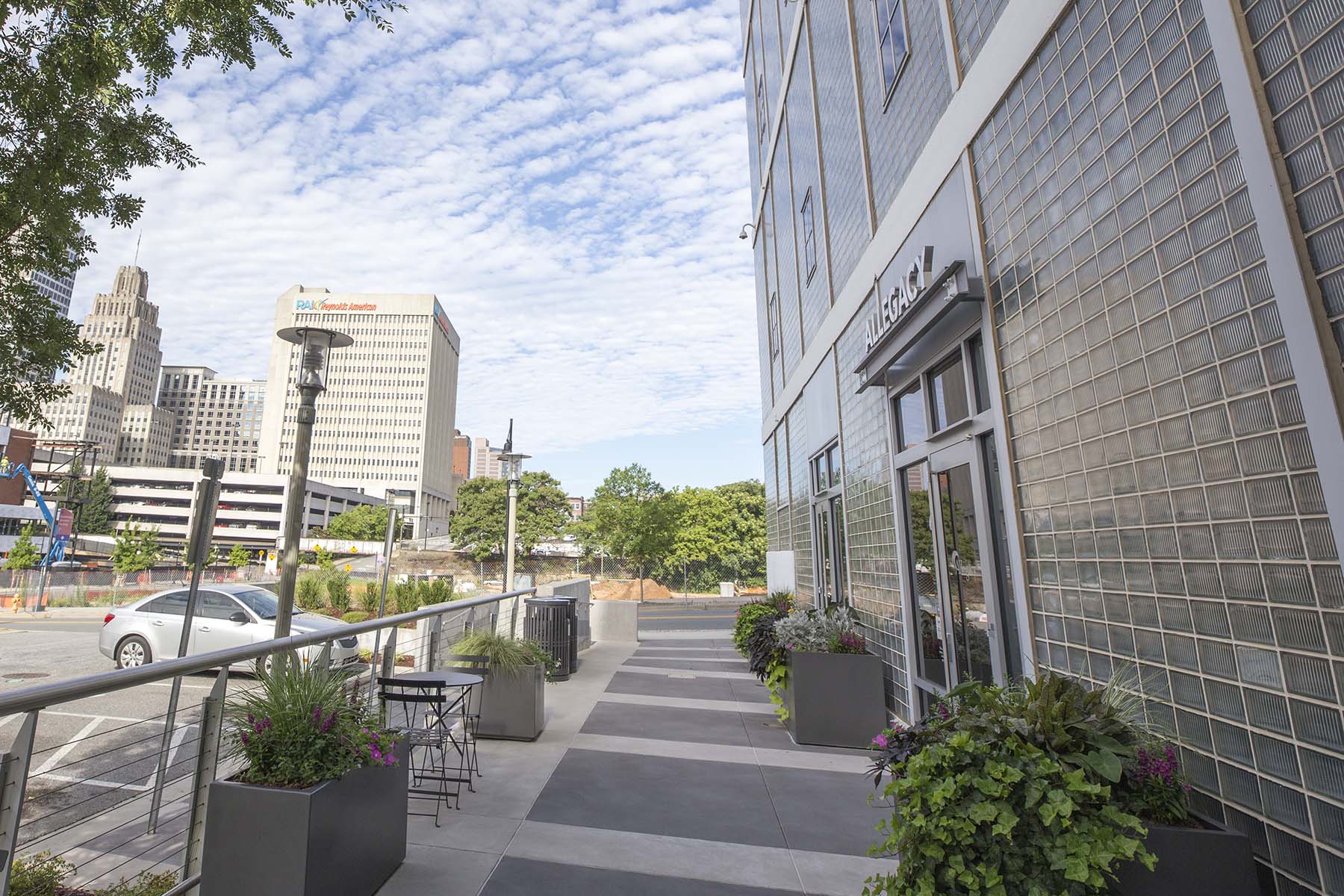 When Cathy Pace looks at the concrete, steel and glass structures on the eastern edge of downtown Winston-Salem, she sees the past, present and future of the city.

“We were founded to serve the people who worked in those old factories and warehouses,” says Pace, president and chief executive officer of Allegacy Federal Credit Union, referring to the former R. J. Reynolds Tobacco Company buildings located in what is now called Wake Forest Innovation Quarter.

This year Allegacy Federal Credit Union celebrates the 50th anniversary of its founding. Though many recognize the credit union’s contributions to the community and its place as one of the cornerstone tenants of the Innovation Quarter, fewer may know that Allegacy was one of the first businesses to commit to the innovation district.

In 2005, R. J. Reynolds Tobacco donated land and several former tobacco buildings that stood on that land to Wake Forest Baptist Medical Center in order to enable the expansion of the Innovation Quarter.

Seeing the vision behind the Innovation Quarter and how it aligned with the company’s mission to serve the Triad community, Allegacy made a key decision that helped change the landscape of downtown Winston-Salem.

Founded in 1967 as Reynolds Carolina Credit Union, Allegacy was created to provide a safe source of small loans and savings accounts for employees of R. J. Reynolds Tobacco Company. The credit union was born out of the company’s desire to protect its employees from financial predators and others who might take advantage of them.

In the 1980s and 1990s, the tobacco industry was upended and economic turmoil gripped Winston-Salem. Jobs disappeared, factories began to close and the city was on the verge of despair.

Ken Elkins, senior vice president of consumer lending at Allegacy, joined the company in 1990 and saw the city’s struggles up close.

“This area was ripe for blight,” Elkins says. “You couldn’t go downtown at night. I remember thinking this was going to be a derelict town.”

As community banks in the area closed or were absorbed by large corporations, Reynolds Carolina Credit Union remained one of the few local financial institutions. The company expanded its membership ranks to include other companies’ employee groups. While this allowed the company to remain viable, it also permitted them to offer their “people first” service to the broader community.

During these difficult times, the seeds of what would become the Innovation Quarter were being sown, and the company that would become Allegacy maintained a steady, strong presence.

The Future of the Community

As the rebirth of downtown Winston-Salem began around the turn of the century, catalyzed by developments within the Innovation Quarter, at about the same time that Reynolds Carolina Credit Union became Allegacy Federal Credit Union. Pace, who was then vice president of marketing, business development and wealth management at Allegacy, knew the company could be a prominent player in the rebirth of downtown.

“We could have stayed in place, but we recognized the importance of the innovation district and that it was in the best interest of our community to make way for its expansion,” Pace says. “The new businesses that would be there, the new ideas that would come out of it, those were the future of our community, and we were committed to seeing the Triad thrive.”

The place Pace refers to was a branch location on Fifth Street in downtown Winston-Salem that Allegacy built in 1977. In addition, Allegacy owned an adjacent parking lot, where it kept repossessed cars.

Decades later when development of the north district of the Innovation Quarter was getting underway, Allegacy Federal Credit Union sold the land on which its branch stood to Wake Forest Baptist. The company’s move allowed the land behind the branch to become Bailey Park.

As part of the engagement with Wake Forest Baptist, when Biotech Place opened in 2012 Allegacy re-opened its branch in the repurposed tobacco building and became one of its cornerstone tenants.

As Allegacy celebrates its 50th year in business, the company is introducing new financial products and ways of serving its members that are unlike anything they’ve done before.

“We’re unveiling new delivery systems, new ways to access our service,” says Elkins. “Our goal is to stay ahead of the curve and respond to the expectations of the digital age, while maintaining our human touch.”

These programs are evidence of the vision that Allegacy and the Innovation Quarter share to foster new ideas and bring growth to Winston-Salem.

“What happens at Innovation Quarter is the same kind of ingenuity and forward thinking that we’re looking to deliver to our members,” adds Elkins. “We’re trying to match that innovation.”

While Allegacy is focused on being a financial institution for the future, Pace says the core values of their past will remain the same.

“We were started to help people prosper and thrive,” she says. “That part of our mission hasn’t changed.”

In the Innovation Quarter, Allegacy has found a like-minded spirit, one that the credit union recognized early. Together, they are building a stronger community and economy in Winston-Salem and the Piedmont Triad.