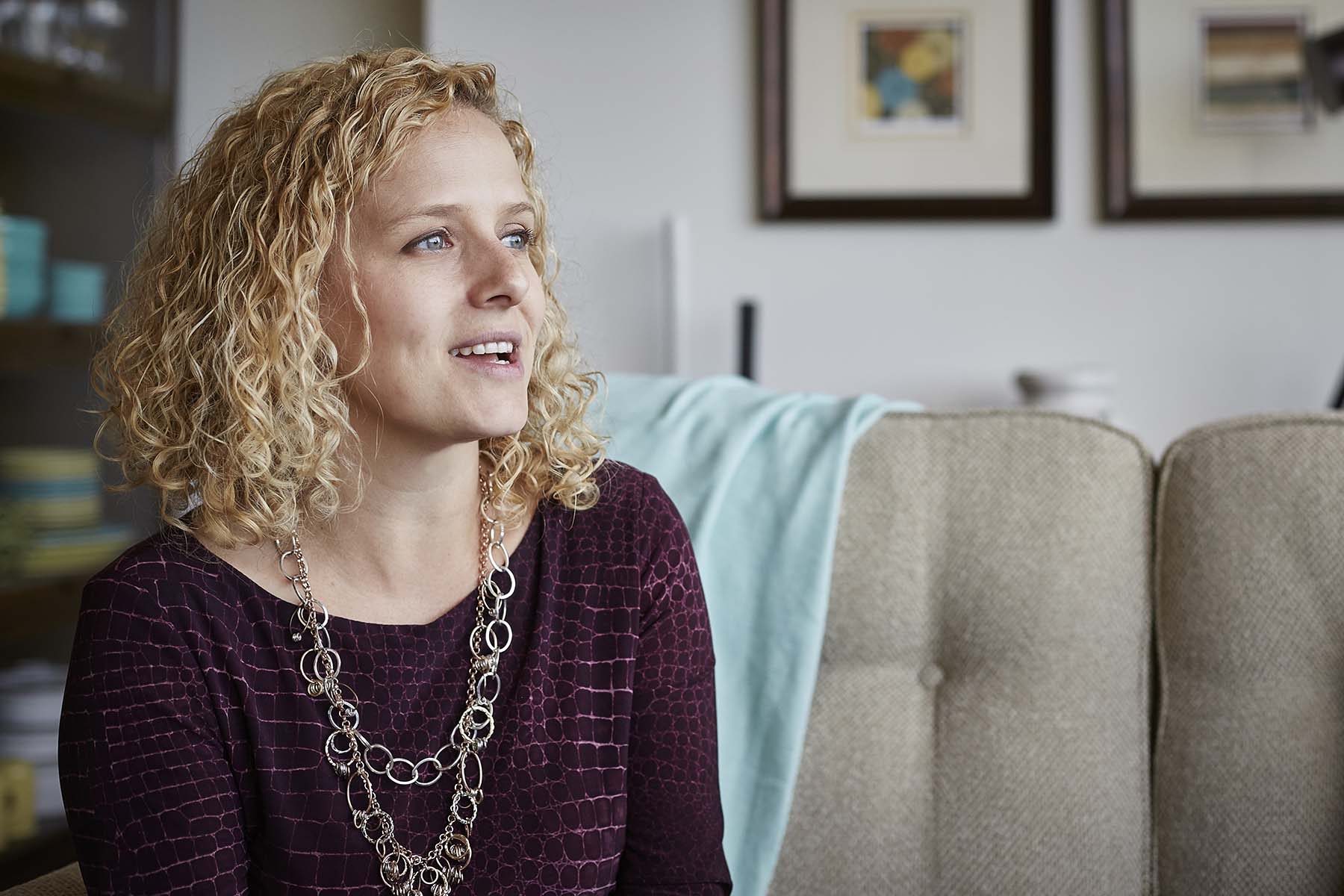 Amy Creason is a transplant, one of the many people brought to Winston-Salem by the revitalization of downtown. This transplant has taken to the City of Arts and Innovation like a fish to water, like a fundraiser to shaving heads.

Don’t worry; we’ll get to that last bit in a minute.

Amy hails from Richmond, Virginia, but moved to Winston-Salem in 2009 to become the property manager of the Winston Factory Lofts—industrial-style loft apartments in a revamped Hanes hosiery factory within Wake Forest Innovation Quarter.

Seated in a conference room, our voices echo a bit off the elevated exposed ceilings. The room overlooks a lounge, complete with a large stone fireplace and a red-lined pool table.

“I always make sure there’s a pool table in our buildings,” Amy tells me. As it turns out, she’s a bit of a pool shark.

Ok, so pool is her hidden talent, and I spoiled the surprise. Don’t worry, that’s not her only twist.

“Even since I moved here, downtown has changed quite a bit,” she says. “Living in downtown Winston is pretty much the thing to do now.”

Oh man, I want to be one of the cool kids.

Before she can ask where I live and expose my not-coolness, I ask,

“What personal accomplishment makes you the most proud?”

“Personal accomplishment?” Amy says. “That’s a tough question. I guess it’s work-related, but also a personal accomplishment. I moved to Winston knowing no one, kind of on a whim, having no experience in this industry that I was moving here for. Just kind of needed a change of pace.”

She continues, “Coming to a new city that you know nothing about and where you know literally no one is a challenge, especially in a city that was changing and growing, not really sure of its identity. In 2009, Winston-Salem was getting there, but nothing like today when it’s got a serious identity.”

Sounds like Amy and the city were finding themselves at the same time.

“That’s something that I’m definitely proud of being able to do,” says Amy. “I’ve kind of taken on Winston-Salem, and I really love it here.”

Then I ask Amy,

“What is your hidden talent?‘

But you already know the answer. What you don’t know is that Amy has been playing since she was 18 and that she plays pool in a league.

“Playing in a league, that’s a good way of meeting people when you’re new,” Amy adds.

Amy also told me that she’s pretty good. If you meet her at a pool table, you’ve been warned.

“What does innovation mean to you?”

Amy seems to have a pretty good working definition of innovation; she’s quick on the trigger.

“I think it means taking an idea and really running with it, to make it blossom,” she answers.

“Based on that definition, who would be a local innovator you admire?”

“I’m in building development, so I think that John Bryan, the owner of Krankies and West End Mill Works, has done a really great job of seeing the potential in things before they happen. He’s renovated quite a few buildings and brought a lot of new ideas to downtown. He was willing to dive into it before others were and take a chance on whether or not things would work out. He’s a good person to look up to in the world of renovating,” Amy says.

I try a question that often unleashes the inner nerd.

“World traveler,” Amy answers easily. “If I could go everywhere, I would. I think traveling teaches you more than any job or book ever will. I’ve been fortunate enough to travel to Africa, India and Japan. I love seeing other people’s cultures and other people’s climates.”

I’ll finish my own sentence. When I grow up, I want to be like her.

“Where did you travel in Africa?” I asked.

“I went to Tanzania,” Amy answers. “Amazing food, but it makes you think about how lucky we are. Although we like to gripe about all the things wrong in the United States these days, we’ve got it pretty good by comparison.”

“How about if you were to take up a second career, what would it be?”

“I would work at a nonprofit. I really enjoy fundraising.”

A corner of my mind has the cheek to wonder who in the world likes fundraising.

“Especially fundraising for childhood cancer research. Before moving here, I did some freelance fundraising trips that allowed me to travel a bit. It was an endearing and eye-opening experience to see what childhood cancer does to not only the children affected, but also the families and the doctors and the nurses. I was surprised how underfunded cancer research is,” Amy says.

“If I could quit my job and could spend all my time doing childhood cancer research fundraising, I would.” She adds, “A couple years ago, I even shaved my head to raise funds for a St. Baldrick’s Day event held at Finnigan’s Wake every year.”

I told you we would get back to that comment.

“It was the greatest thing I’ve ever done. I loved it, and I would highly recommend it to everyone. It’s very liberating.”

It’s official: Amy’s just too cool. After just twenty minutes with her, I have a sudden urge to take up pool, live downtown and travel to Tanzania. If you get a chance to shoot pool with this property manager in an industrial chic atmosphere, remember two things: One, you will definitely lose, and two, you might emerge a changed person…or at least shaved.