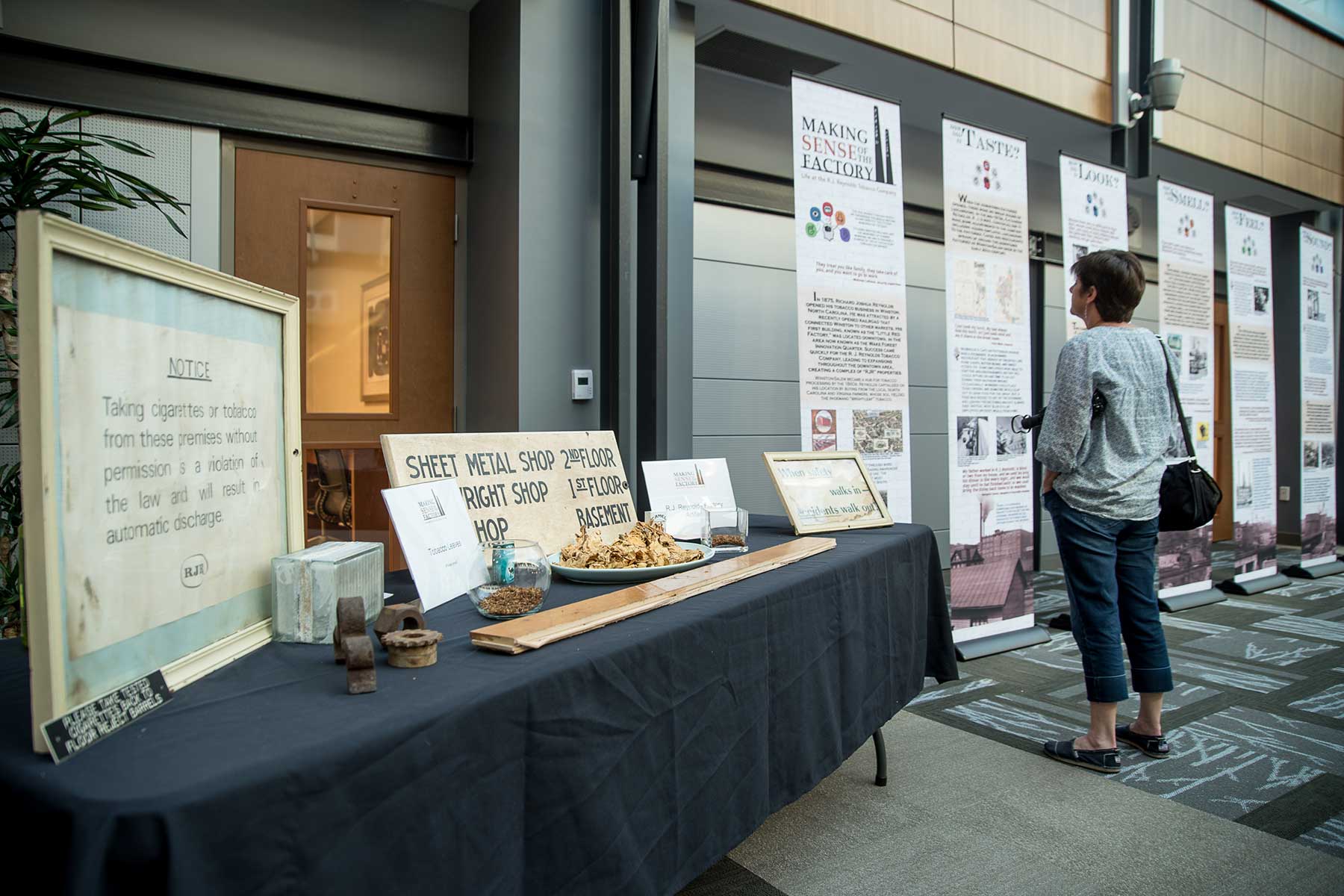 The sweet smell of dried tobacco.

The rumble of trains rolling out of town, laden with Camel and Salem cigarettes, waiting to be shipped around the world.

The hum of countless conversations as thousands of workers arrive in the morning and depart at the end of the day.

Wake Forest Innovation Quarter was a very different place a few decades ago. R.J. Reynolds Tobacco Co.—the economic engine that powered Winston-Salem for a century—drew thousands of workers to the area every day.

But despite the impact that Reynolds and tobacco have left on the city, relatively little is known about the day-to-day working lives of Reynolds workers.

Amanda Holland, a graduate student in the University of North Carolina at Greensboro’s museum studies program, has long been interested in tobacco’s role in North Carolina’s history.

“It’s no secret that R.J. Reynolds has had such an impact on not just Winston-Salem, but also on North Carolina as a whole,” she says. But, she adds, “very little had been written about what it was like to work there.”

As a historian, she says, that hole in the historical narrative was a “red flag,” a sign more research was needed. While former tobacco factory workers still live in Winston-Salem, the majority of the community has no recollection of what life was like in the tobacco district.

In 2015 Holland was presented with the opportunity to create an exhibit about the Innovation Quarter’s history by New Winston Museum and the Innovation Quarter—giving her the chance to begin filling the gap in history. The end result, “Making Sense of the Factory: Life at the R.J. Reynolds Tobacco Company,” was revealed earlier in May at Wake Forest Biotech Place and will travel to several locations in Winston-Salem throughout 2016.

Complementing the exhibit, three events will be held to help create conversation around this part of local history. The series results from a partnership between the Innovation Quarter, New Winston Museum, Triad Cultural Arts and Reynolda House Museum of American Art—all organizations that share the objective of preserving Winston-Salem’s unique, cultural history.

“During Reynolds’ heyday, the area represented a kind of socioeconomic border region in the city,” says Chris Jordan, curator of education at the New Winston Museum, which is organizing the exhibit. “Affluent executives who lived in the neighborhoods to the west of downtown would interact with working class residents of east Winston-Salem in Reynolds’ offices, factories and warehouses. When workers left at the end of the day, some headed east to go home, others west.”

Jordan says a conversation about the history of Winston-Salem is important to the community, including how the heart of Reynolds’ manufacturing operations are now manufacturing wealth from new ideas.

“It builds trust,” he says. “This is an opportunity for people from different parts of Winston-Salem to learn together and participate as a new economic engine is built on the site of the former Reynolds Tobacco buildings.”

“This is a dialogue,” says Lindsey Yarborough, senior manager of community relations at the Innovation Quarter, which will host the exhibition from May through July before moving to the New Winston Museum, “It’s important for the Innovation Quarter and the larger community to understand the significant past of this place going forward.”

Digging up the Past

To understand this past and gather the information needed for the exhibit, Holland spent over six months researching the topic.

With backing from the Innovation Quarter and the New Winston Museum, Holland started contacting former Reynolds workers. She sat down with six former employees, plus a farmer who supplied tobacco to Reynolds, and recorded more than 13 hours of oral history interviews. The interviews provide a glimpse into what it was like to work at one of the world’s largest tobacco companies at a time when it was still a vital part of North Carolina’s economy and culture.

Insights from those interviews, as well as other research, are presented in the exhibition. Organizers hope the exhibition will bring back former Reynolds workers to learn about the Innovation Quarter, and that in turn, Innovation Quarter workers will learn about the history of the buildings they occupy and the lives of the workers who preceded them.

The exhibition’s seven panels document the past and present of the former Reynolds Tobacco factories through the five senses. Holland’s interviews provide insights into what it was like to work at Reynolds from the 1970s through the 2000s — the sights, sounds, feel, tastes and smells.

“If you don’t smell raw tobacco or cigarettes, you know something’s wrong,” Malcolm Calhoun, a former security supervisor for the company told Holland, recalling his days at Reynolds. “Someone’s not working.”

During her interviews, Holland learned about much more than tobacco. She also discovered that the relationship between Reynolds and its workers and the relationships among the employees were a lot like a family.

Holland explains that, just as with real families, there were conflicts at times. But employees were also proud to work at Reynolds, with children sometimes succeeding their parents in factory jobs. Reynolds repaid the loyalty in many ways.

In the early ‘70s, the company introduced more advanced manufacturing equipment. To operate it, employees had to be able to read and write, but not all workers were literate. So Reynolds arranged for tutors from Forsyth Technical Community College to instruct workers during meal breaks.

Individuals who needed the instruction got five years to learn enough to catch up with their peers. Those who didn’t would be reduced a pay grade—but could still keep their jobs.

“R.J. Reynolds was very conscious of needing to invest in their employees, to keep them happy and make the company more efficient as well,” Holland says. “That tutoring story is one of my favorites, particularly because the interviewee was getting a little emotional when he was telling this story. Clearly it meant a lot to him.”

“We all have a right to share our stories,” she says. “Even for someone who just got the job in the factory to put food on the table—that’s their history. That needs to be shared and celebrated.”

Visit the exhibit on the second floor of Wake Forest Biotech Place from May through July. In August the exhibit will move to New Winston Museum where it will be displayed until early September. The next event in this series will be presented by Dr. Bob Korstad, author and professor of public policy and history at Duke University, at Reynolda House Museum of American Art on Sunday, July 31. Details to follow.