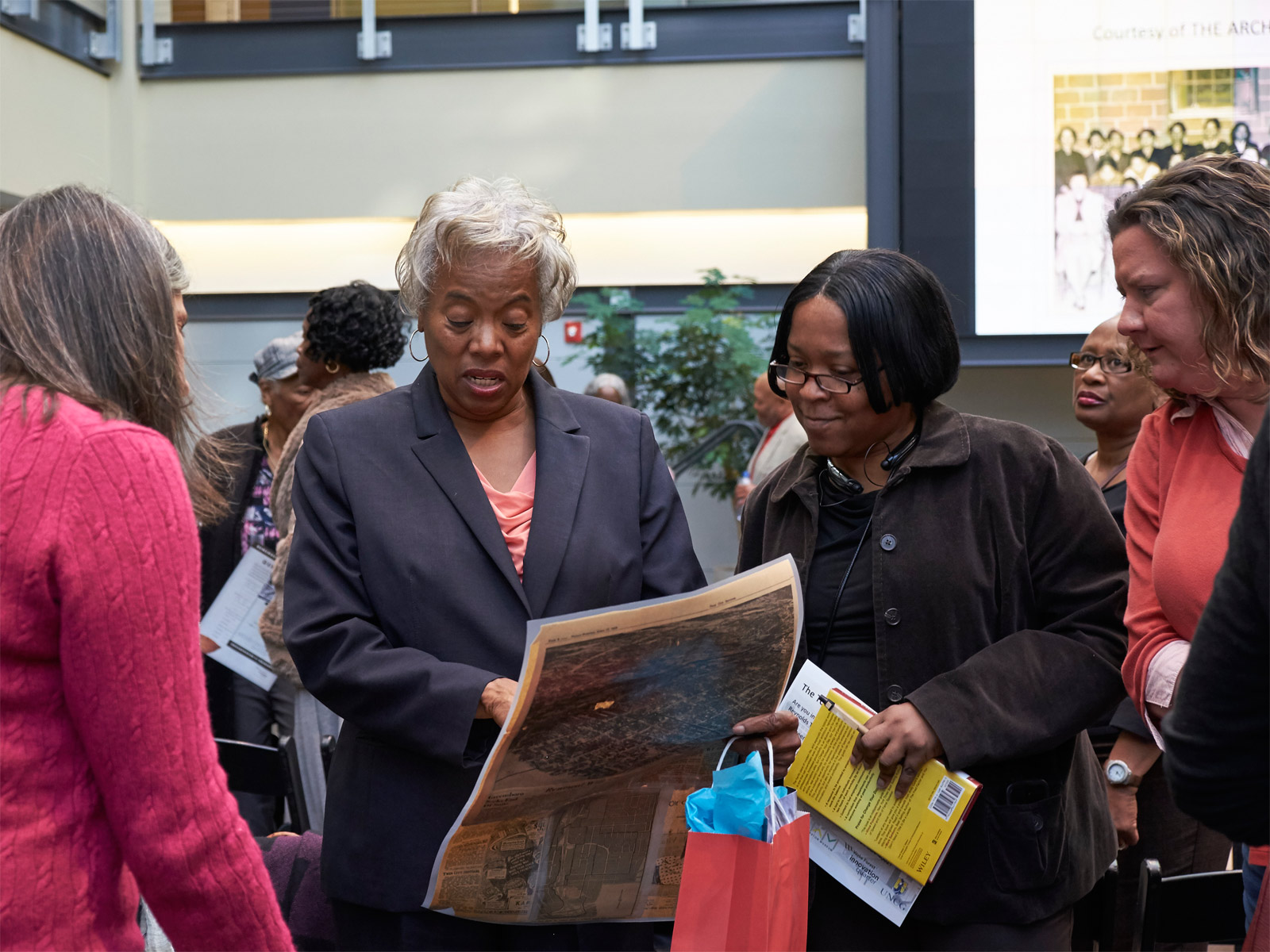 Read how the Innovation Quarter partnered with local groups to commemorate the history around the former tobacco factories.

Winston-Salem’s history as a center of the tobacco industry from the late 1800s through the end of the 20th century is well-documented. Some of the history you can even see still standing in the form of former R.J. Reynolds manufacturing buildings that have been revitalized and now serve a wide variety of purposes as part of Wake Forest Innovation Quarter. These buildings stand as tangible reminders of tobacco’s central role in the city’s development.

But the same can’t be said of the predominantly African-American neighborhoods that once flourished around the tobacco district, areas where thousands of people lived, worked, built businesses, shopped, worshipped and socialized.

Most things that were important to us were torn down.

“Most things that were important to us were torn down,” says Barbara Morris, who grew up in the largest of these communities, the Belews Street neighborhood that was demolished in 1958 to accommodate highway construction.

In subsequent years, areas around the district that weren’t razed in the name of urban renewal were left isolated and unsustainable when the major tobacco operations were moved to other locations. Today, contemporaneous records of these neighborhoods are relatively scant.

“It’s a regrettable fact that, because of the social attitudes and conditions of the time, the historical record of these primarily black communities – in public documents, newspaper accounts, photographs and so on – is sorely lacking,” said Chris Jordan, Curator of Education at New Winston Museum. “We want people to understand that place matters; every place has a history. As we celebrate the amazing progress being made in the area, it is our responsibility to capture and accurately depict that history as best we can.”

The public and private institutions involved in the current revitalization of the former tobacco district – comprised of both once-bustling factories and the land where once-thriving communities sat – are committed to doing just that.

One example of that commitment: “Remembering the Neighborhood: Life in the Former Tobacco District,” an interactive event devoted to exploring the rich and complex history of the now-vanished communities. It was held in November at Wake Forest Biotech Place, which occupies two former R.J. Reynolds buildings, in the Innovation Quarter.

“Since the remarkable donation of land and many former tobacco factories, warehouses and other buildings by R.J. Reynolds, we believe it is our duty to recognize and to commemorate the history of this area,” said Eric Tomlinson, president of the Innovation Quarter. “So it was both a pleasure and an honor to participate in and serve as the venue for this event.”

The program included a moderated panel discussion, collections of historical images, oral history recordings, a “memory mapping” project and opportunities for former areas residents and workers to have their recollections recorded, either during the event or later on.

The narrative of the tobacco district neighborhoods and what happened to them invariably includes segregation, a subject that, as Tomlinson noted in comments to the Winston-Salem Journal, still evokes “some anger and some sadness.” But no effort was made to gloss over it, or any other thorny aspect of the area’s past.

It was part of the times we were living in. You can’t ignore it, but you can learn from it.

“It was part of the times we were living in,” said Morris, who served as one of the “Remembering the Neighborhood” discussion panelists. “You can’t ignore it, but you can learn from it.”

Morris, who has organized reunions of former Belews Street residents and was instrumental in having a historical marker recognizing the neighborhood erected on Research Parkway (formerly Linden Street), appreciates all efforts to keep alive the story of the tobacco district communities.

If you or someone you know has a story to tell about working in the former tobacco districts, please email Amanda Holland at ajhollan@uncg.edu to share your experience.