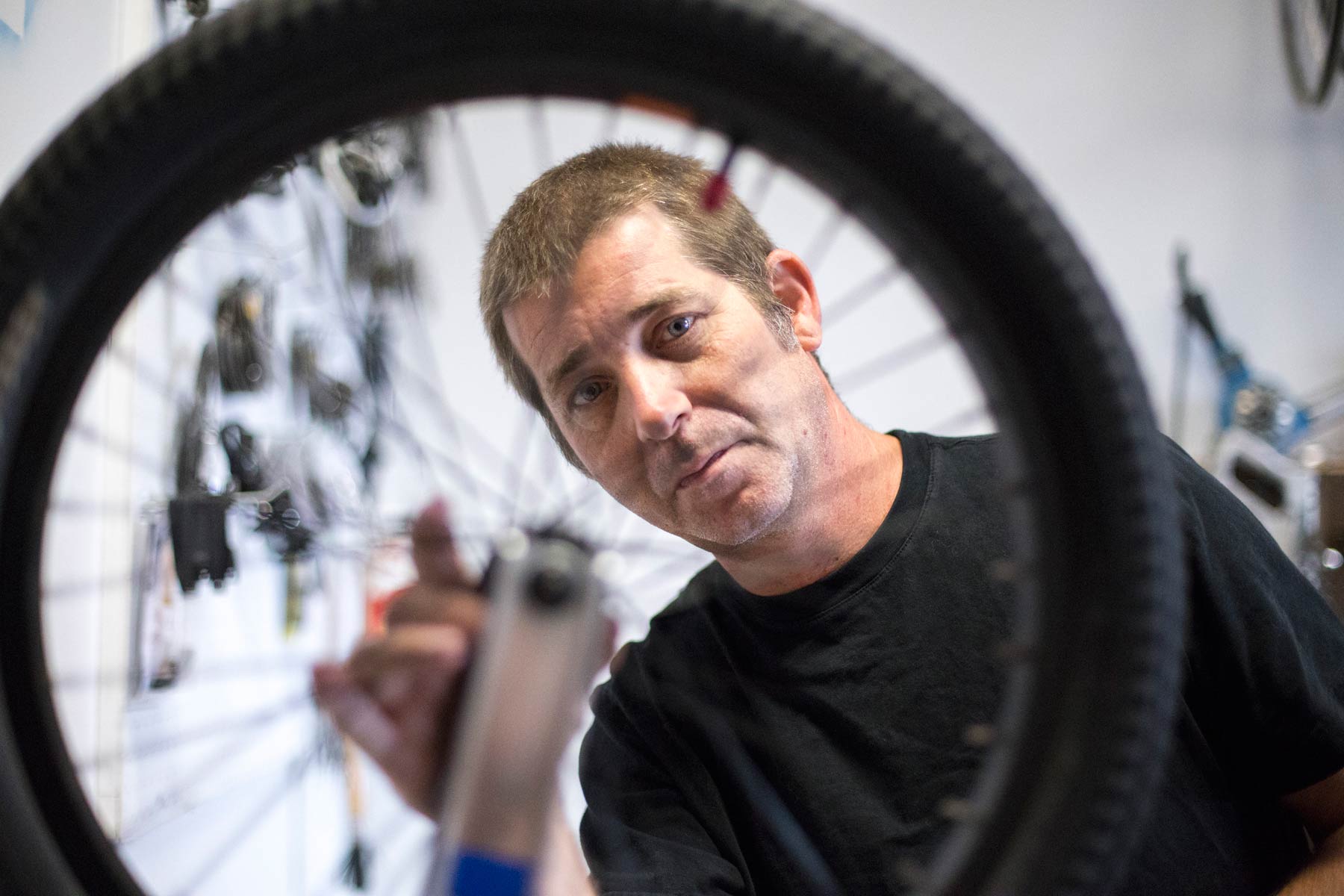 “I can see Bailey Park from my window,” said Greg Waddell, owner of Cycle Your City at 362 N. Patterson Ave. in Wake Forest Innovation Quarter.

The bicycle repair shop is just one example of the growing movement toward a fit and active lifestyle that is being adopted by professionals, students and people of all ages, especially in the Innovation Quarter.

Waddell, a lifelong cyclist, knows the ins and outs of the sport, from spoke to saddle. He holds a master certification from the governing body of the sport, Union Cycliste Internationale, and has been repairing bikes since 1986.

“I was always mechanically inclined before I was a sponsored racer, but cost of bike repairs pushed me into this part of the business,” he said. “It was cost-effective and made sense for me.”

Cycling is a big part of Waddell’s schedule. He starts off his day with a ride and then heads to work to fix bikes of all sorts, from top-of-the-line racers on down. He also coordinates weekly group rides from the Innovation Quarter to Salem Lake.

Ben Schwab, a partner of Stitch Design and Development, which is located in the Krankies building adjacent to Cycle Your City (CYC), is a regular participant in those Wednesday rides.

“The crew here at Stitch loves having CYC right downstairs, and they use Greg’s services frequently,” Schwab said. “Greg’s experience and service-oriented shop are a great fit for the Innovation Quarter.

“Winston-Salem is making great strides toward improving the cycling culture and CYC is an integral part in moving that forward.“

The Rails-to-Trails greenway that is in the process of being built along the western side of the Innovation Quarter was a factor in Waddell’s decision to locate his business on North Patterson Avenue.

“This location puts us where we are able to cater to a commuter lifestyle,” he said. “A tourism component will likely follow once the greenway is complete.”

For those on the fence about getting a bike, Waddell said a benefit aside from fitness is cost.

“A bike is a one-time investment, unlike some sports where you have to pay to play, such as golf,” he said. “From an urban point of view, you can get across the downtown grid faster on a bike and parking is not an issue.“

Cycling is also a lifestyle choice.

“We are seeing an increase in our cycling community as more people are turning to healthier lifestyles,” said Eric Tomlinson president of the Innovation Quarter. “The convenience of commuting by bicycle is being embraced by people who work and study in the Innovation Quarter as well as by residents and others who understand the benefits.”

Winston-Salem is rapidly developing into a major hub of competitive cycling. Large crowds attended the third annual Winston-Salem Cycling Classic in May, and the city will play host to USA Cycling’s masters road, professional road and time trial national championships in 2016 and 2017. The National Cycling Center, a training facility affiliated with USA Cycling, is being developed in a 42,000-square-foot building on North Liberty Street – just blocks away from Cycle Your City.