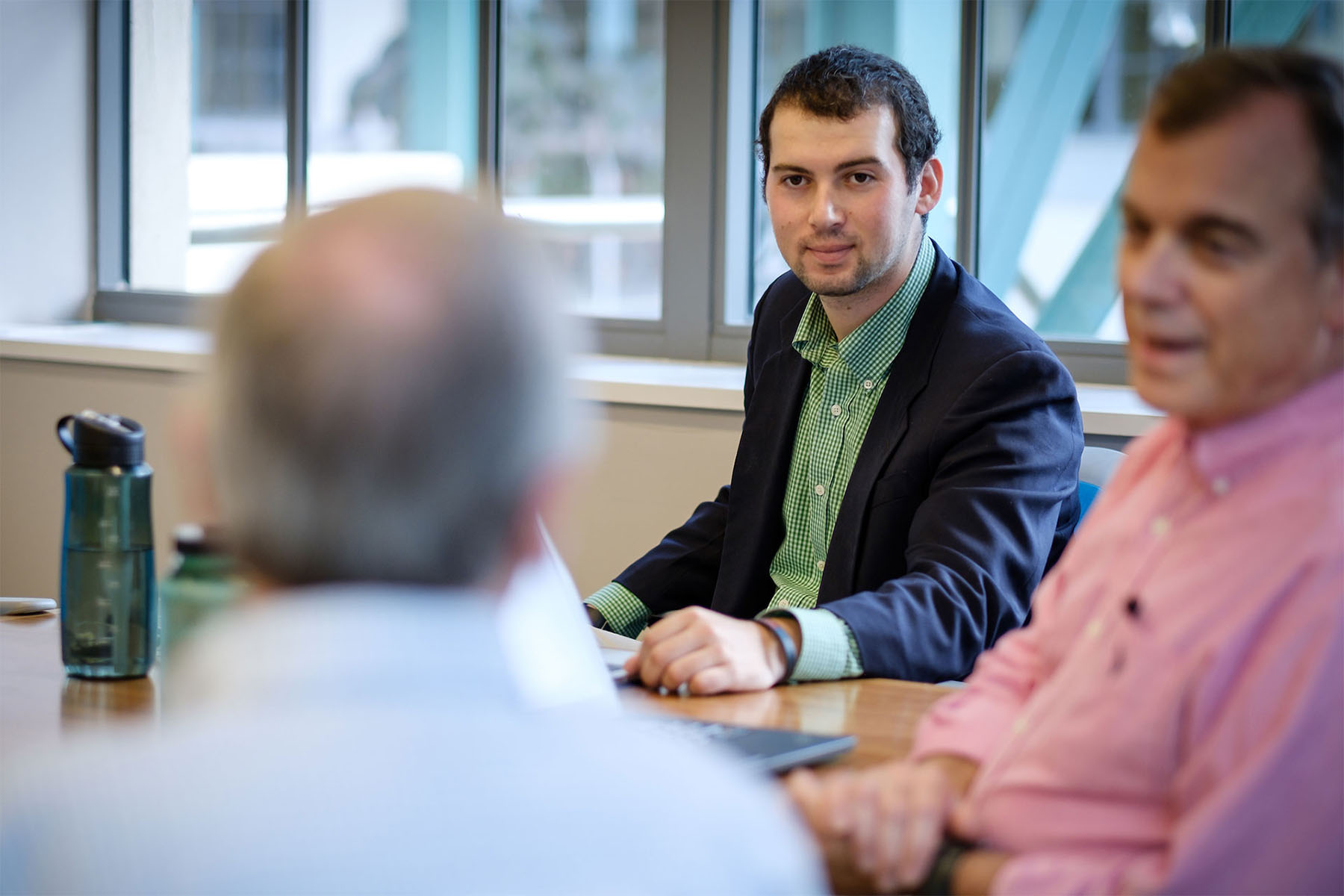 At 33, Omeed Rahimi is the oldest of the three founders of EncepHeal Therapeutics, a drug development start-up located in Wake Forest Innovation Quarter. Aaron Lazarus and Ayana Martin haven’t yet hit the big 3-0.

The trio first combined their youthful enthusiasm while they were graduate students at Wake Forest University. Their strong showing in a national competition in 2015 led to the formation of EncepHeal and its mission to develop drugs to fight cocaine addiction.

Setting up shop in the Innovation Quarter has led to collaborations with drug addiction experts at Wake Forest School of Medicine, particularly with investigators and laboratories in the physiology and pharmacology department. The company is also tapping the entrepreneurial expertise at Wake Forest University School of Business.

“Innovation Quarter is the best place in the world for this company to grow,” says Steven Childers, PhD, professor emeritus at Wake Forest School of Medicine who serves as EncepHeal’s chief research officer. “There is a vast amount of knowledge, expertise and technology right here that EncepHeal can take advantage of.”

Childers has researched drug abuse for four decades, spending half of those years as director of the Drug Abuse Center at the Wake Forest School of Medicine, where he focused on developing therapeutics for cocaine addiction. His connections are a solid foundation for EncepHeal to build upon.

“The main attraction for me is to combine my years of scientific expertise with the energy and passion that these young entrepreneurs bring to an area that represents a critical health problem in the U.S.,” says Childers.

While in graduate school, Rahimi, Lazarus and Martin joined forces to participate in the Neuro Startup Challenge, a competition hosted by the National Institutes of Health and its partners. In the challenge, university-based teams submit business plans for developing inventions owned by the National Institutes of Health. Winning teams receive monetary awards to help launch start-ups to raise capital, apply for licenses and develop the technologies they selected for the competition.

“We originally thought this competition was going to be a way to learn about biotechnology, drug development and entrepreneurship,” says Lazarus. “But we stumbled upon a potential solution to the problem of addiction that can help millions of people.”

The team emerged from the competition as a finalist, which allowed them to form a start-up and license—exclusively—a class of therapeutic drugs developed at the National Institutes of Health with the potential to treat cocaine and methamphetamine addiction.

No treatment for addiction to those two drugs has won approval by the U.S. Food and Drug Administration, but as EncepHeal, the three former graduate students and the rest of their start-up team are looking to change that fact.

Each of the founders of EncepHeal has a history that drives their work in this area of scientific discovery, fueling the work they do together.

Lazarus grew up the son of medical doctors in South Jersey. But after shadowing his father at work, Lazarus decided practicing medicine was not his calling, despite his love of science.

As a teenager in suburban Minneapolis, Rahimi caught the entrepreneurial bug while mowing lawns to earn pocket money.

Martin discovered, while growing up in Pasadena, California, that she had a gift for translating complicated scientific information into language easily understood by non-scientists—which sometimes included her mother.

When he arrived at Wake Forest University in 2010, Lazarus never dreamed that he would be the chief executive officer of a start-up tackling a societal problem without a cure.

While earning his undergraduate degree in biology, Lazarus also completed a master of arts in management from Wake Forest University School of Business.

“It was a one-year crash course in business,” says Lazarus. The programs introduced him to the foundations of entrepreneurship and biotech start-ups, as well as his future teammates.

During the Neuro Startup Challenge, one of Lazarus’ fraternity brothers died of a drug overdose, making personal the epidemic of 24 million Americans suffering from drug addiction. Nearly 8 million of those people are hooked on cocaine and methamphetamines.

Rahimi, who is earning his doctorate in physiology and pharmacology from Wake Forest School of Medicine, had a lifelong scientific interest in therapeutics. It took a personal turn when as a young adult he started a regimen of drugs to combat inherited blood pressure and cholesterol problems.

“It helped spark my interest in how drugs work,’’ Rahimi says. “It didn’t make sense to me that I had to be on drugs for the rest of my life, which got me interested in the science behind them.”

Martin gets her motivation from a different source. From a young age, she liked exploring and asking questions and was always eager to share the answers she learned with people around her.

“When I was working as an intern for Nobel laureate David Baltimore, my mom attended an immunology presentation that I gave,” Martin says. “Afterward, she told me that she was able to understand the major points of my presentation, even though she was totally unfamiliar with immunology. It helped me realize that I have a knack for helping others understand complex concepts.”

That experience reinforced Martin’s interest and abilities in translating scientific complexities and helped point her toward a doctorate in molecular medicine and translational science from Wake Forest School of Medicine.

Though each was on a separate path, their common threads ultimately lead the trio to meet at the outset of the Neuro Startup Challenge. And the rest trickled out from there.

Getting Down to Business

The competition was hard work, but it was only the beginning as the three founders began the arduous task of actually running a fledgling biotech start-up while finishing their graduate degrees. They licensed a non-addictive class of compounds from the National Institute of Drug Abuse and incorporated EncepHeal as the entity to develop these drugs.

The parent drug of this class of compounds is called modafinil (Provigil®). Modafinil has already been approved by the U.S. Food and Drug Administration as a treatment for narcolepsy. Modafinil, a weak psychoactive stimulant, shares some common mechanisms with cocaine, but its actions in the brain produce much less addictive liability, making its analogs ideal candidates for development as potential cocaine treatment agents.

We are willing to take the risks that no one else is and have gotten this far. We bring a fresh view.

“Since modafinil made it all the way from development to the market for the treatment of narcolepsy, demonstrating that this class of compounds is safe and effective, we think these improved compounds are great candidates to take into addiction studies for cocaine and methamphetamine,” Rahimi says.

But developing a new kind of therapeutic is an expensive endeavor and the first stage of EncepHeal’s life as a young company has been dedicated to fundraising. In the past nine months, EncepHeal has raised over $500,000 in grants to begin research, with awards from the National Institute of Drug Abuse, the North Carolina Biotechnology Center and the state of North Carolina’s Small Business Program.

Now the founders are getting down to the nitty-gritty, raising more money and working with researchers in the laboratory to identify a compound that can safely curb addiction to cocaine without becoming addictive itself.

Advancing a promising compound from the lab to preclinical testing to clinical studies may take five to seven years, or longer. If the treatment proves safe and non-addictive to humans, EncepHeal plans to license the drug to a pharmaceutical manufacturer to take charge of large-scale human studies and Food and Drug Administration-approval.

“Drug development is always a challenge because there are so many places a drug can fail along the development pathway,” says Childers, who became involved as a scientific advisor during the competition and then joined the management team. He also served as the principal investigator for EncepHeal’s Small Business Innovation Research (SBIR) grant awarded by the National Institutes of Health.

EncepHeal believes their suite of therapeutics is worth betting on. The Affordable Care Act mandates coverage for the treatment of drug abuse, requiring insurers to reimburse patients and making the development of drugs to treat addiction more economically favorable for pharmaceutical companies. Small companies like EncepHeal are often the ideal groups to start the early development of these kinds of drugs because large pharmaceutical companies have traditionally shied away from developing medicines for drug abuse.

“The real impetus for the changing attitude has been the national opioid epidemic, where many thousands of people are killed from opioid overdose every year,” Childers says. “It’s a perfect moment for a young start-up company like EncepHeal to get involved in this area.”

And the Innovation Quarter in Winston-Salem might just be the perfect place to incubate the biotech start-up. EncepHeal got its start in the innovation district, supplementing its office space in Flywheel Coworking with the use of laboratories in the Piedmont Triad Community Research Center to conduct research on the compounds it has licensed. As the company begins to grow, it hopes to expand the start-up’s footprint by growing into the Innovation Center being opened in Bailey Power Plant.

In the Innovation Quarter, the young entrepreneurs of EncepHeal get to work side-by-side with renowned researchers, academics and successful entrepreneurs, in addition to the relationships that the start-up is building with Winston-Salem’s medical and research communities.

“The expertise in addiction pharmacology is here,” Lazarus says. “The resources and infrastructure are perfect for what we need.”

The enthusiasm that launched Lazarus, Rahimi and Martin into that first competition and led to their early success is a big part of what keeps them moving forward. EncepHeal is pursuing funding and partnerships with investors and pharmaceutical companies and government agencies—something that takes a lot of endurance.

In that vein, Martin is attending networking events in New York, meeting venture capitalists and other potential investors. In the process, the youth of EncepHeal’s founders has risen as a challenge.

“Investors see our young faces leading the company, and it makes them nervous,” Martin says. “But we see it as the opposite. We are willing to take the risks that no one else is and have gotten this far. We bring a fresh view.”

And that fresh view may power the start-up to a successful treatment that could help thousands of people and their families.