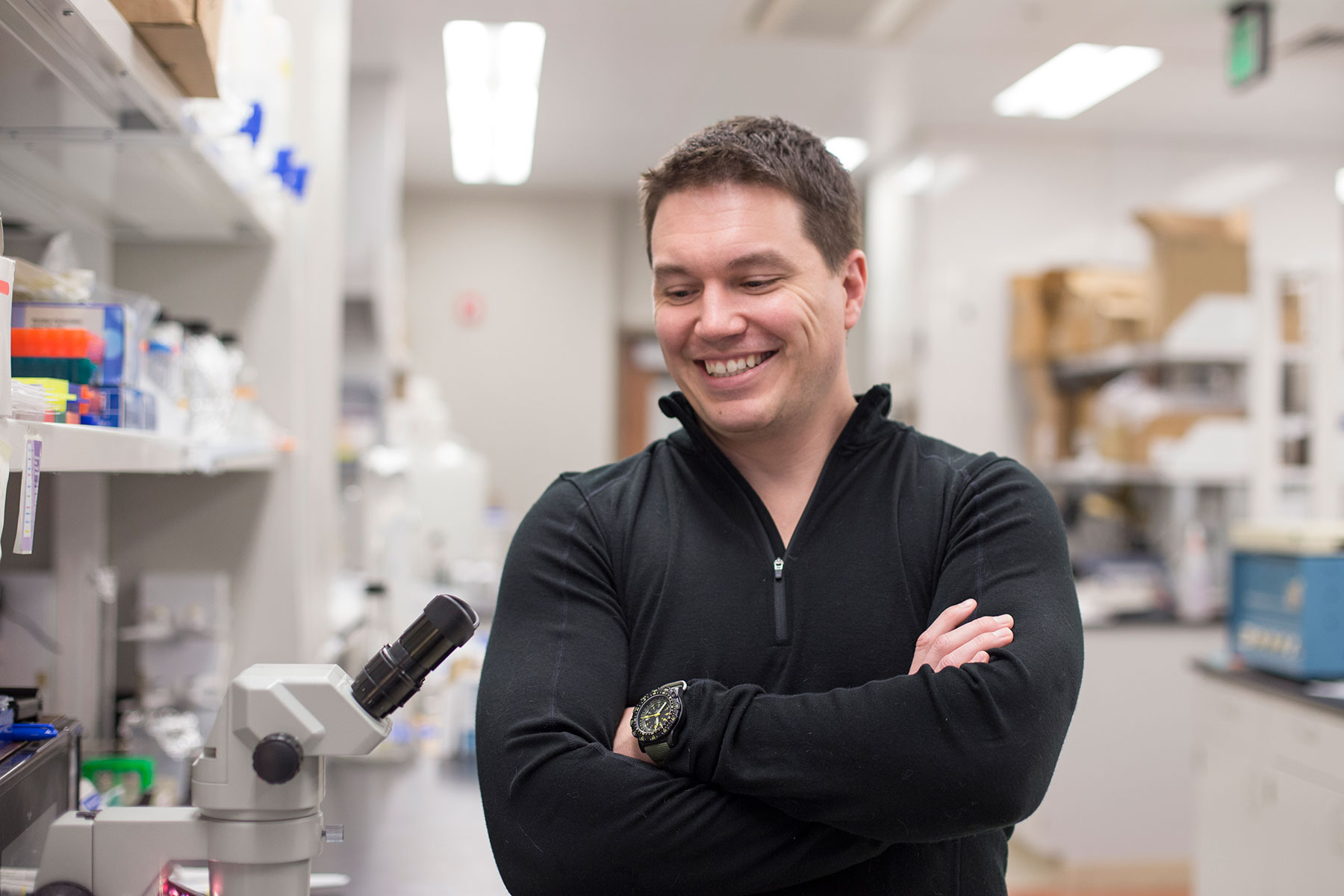 But only one calls himself a “bootleg scientist.”

Jerome McKay is a grad student, one of many who pursue an education in the Innovation Quarter. His academic home is nestled among rows of wet lab benches on the second floor of Wake Forest Biotech Place. Like all the rest, he gets one half of a bench, a long row of gray cabinets topped with a black countertop and ceiling-high shelves.

His time here as a student is dwindling—he finishes up his PhD in immunology in the next few months.

When I ask, “What brought you to the Innovation Quarter?,” Jerome credits his wife, a gastroenterologist, who matched at Duke for her internal medicine residency, which moved them across the country to North Carolina.

“I thought it was a perfect time to go back to graduate school,” Jerome says. “I already had a master’s in microbiology, and if I wanted to teach or do something further with my career I had to have a PhD to do that.”

He was accepted into Wake Forest School of Medicine, but since his wife attended Duke they moved to Mebane to split the drive. That’s a 130-mile commute round-trip.

But Jerome appears to be a silver-lining kind of guy.

“It was actually the first time that we got to live in the same place,” he says with a smile. “Before that, I was working in Denver, while she was going to med school in Omaha.”

“We finally got to move closer,” he grins.

“What personal accomplishment makes you the most proud?”

“I guess I’m happy with my military career. I guess that’s something that I’m pretty proud of.”

Jerome is pretty low-key about this, but keep reading—he should be proud.

“What branch were you in?”

He subtly corrects my verb tense. “I’m in the Army. This is the end of my 18th year. I’m in the reserves now.”

“Eighteen years?” He doesn’t look nearly old enough to have been in the Army for 18 years. Either he started when he was really young or he doesn’t age. I try to determine which is true.

“So you joined when you were young?” I ask.

“Yeah, I was 17 when I enlisted, and I did eight and a half years as a medic. I came back to finish my master’s degree and then realized that I missed the Army, so I went back in—this time as a microbiology officer.”

“And what does a microbiology officer do?”

“They can have many different careers,” Jerome informs me. ”As for my particular job, I went to Iraq to set up a microbiology lab at a combat support hospital in Western Iraq.” A lab like this is an undertaking that comes with a unique set of challenges. When the lab faced problems, he had to find imaginative solutions.

“Over here [in the United States], if you blow out a bulb on a microscope, you can call the company and have one shipped the next day. We didn’t have that luxury,” Jerome says.

Replacements could take months, especially if it was during sandstorm season. Who knew that sandstorms had their own season? In the meantime, Jerome would rig a flashlight on the back of the microscope until supplies arrived.

Jerome laughs. “Me and my buddy would call it ‘bootleg science’ when you had to McGyver things to solve a problem.” I discover this term works for him on multiple levels as among his many talents he also brews beer.

“Speaking of talents, Would you say that resourcefulness is your hidden talent?”

“I don’t know,” he ponders. “I guess I’m pretty creative and innovative. I think that has served me well.”

“So what does the term ‘innovative’ mean to you?”

“Who is a local innovator you admire?” I ask.

“Definitely my boss, Dr. Karen Haas. She’s a B cell immunologist, and she is particularly interested in B cell responses to carbohydrate antigens….” Jerome continues with a very interesting, but very scientific discussion.

This is what I gathered: Dr. Haas is doing some really cool things. And if you are into immunology, you would have been really excited. I got excited, and I don’t understand most of what I heard.

“Last one,” I say. “What old technology that’s no longer with us do you miss the most?”

“I remember when you had to call up on old school landlines to talk to girls. I think that skill is lost on the younger crowd,” he says. “It took a lot of guts to call someone’s house because you never knew if you were going to get their mom or their dad, who would give you the fifth degree. You had to be able to think on your feet and maintain your presence of mind. It’s great, it put you on the spot. You had to learn conversational skills.”

And learn them he did.

Whether about B cells, sandstorms or brewing beer at home (which I didn’t even have space to tell you about), Jerome McKay is a charming conversationalist. If you ever see him around the Innovation Quarter, make sure to introduce yourself—this bootleg scientist is well worth the chat.