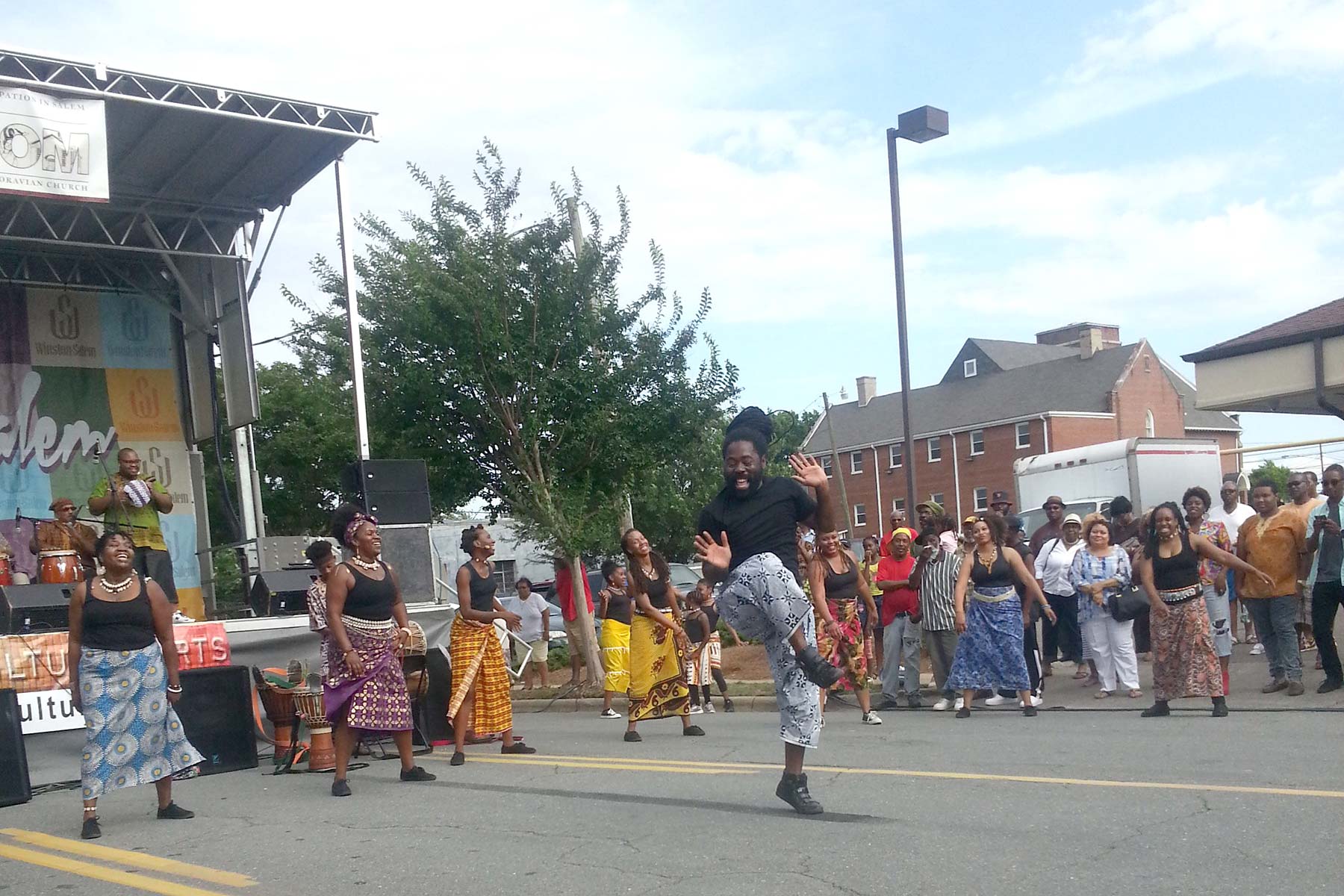 May 21, 1865. A Union Cavalry chaplain stands in the front of the African Moravian church—which will be named St. Philips Moravian Church in 1914—reading an important proclamation.

St. Philips was founded in 1822 as a place of worship for enslaved African Americans in Salem, North Carolina. On that day in 1865, the chaplain reads the official proclamation that declares all persons held as slaves—including the more than 351,000 other slaves in North Carolina—free.

This year’s festival marks the 151st anniversary of this watershed event. Cheryl Harry, founder and chief executive officer of Triad Cultural Arts—sponsor of the festival—says that the new location at the Innovation Quarter will introduce more people to the festival. Her goal is to create an opportunity to enjoy music and dance, make new acquaintances and reflect on Winston-Salem’s role in bringing a dark chapter in American history to an end.

“We need to pay homage and remember all of those people who suffered the toils and pains of slavery,” says Harry. “Ending slavery took the efforts of white and black abolitionists and a lot of other people who showed courage and made decisions that weren’t popular at the time. We must remember.”

A Drink of Water

Harry, who is also the cultural curator and director of African-American programs at Old Salem, says that moving the festival to Old Salem’s northern neighbor, the Innovation Quarter, resonates with her for historical and personal reasons.

Although no one who heard the original freedom proclamation is still living, many people who will attend this event endured segregation and fought for civil rights in the century and a half that followed the initial proclamation. Harry is among them.

As a child, Harry experienced segregation firsthand. She remembers riding downtown with her grandmother, Louise Mack, in the 1960s on the black-owned Safe Bus Co.—a company owned and operated by members of the black community to provide a better transportation experience for their community. She remembers sitting wherever she wanted when she attended the movies at black theaters, but if she went to the Carolina Theater she was required to sit in the balcony.

Even after the Civil Rights Act of 1964, Harry remembers pausing at what had been a whites-only water fountain in a department store. She was hesitant to drink from it even though the Act outlawed segregation of public facilities including restrooms and water fountains.

“I was reluctant to drink out of the water fountain,’’ Harry says. “But I remember my grandmother firmly assuring me that it was okay.”

The Juneteenth Festival celebrates the end of slavery and the brave acts that followed to create a world where Harry no longer has to worry about where she can sit or which fountain she can drink from.

As the Juneteenth Festival in Winston-Salem continues to grow, organizers looked for a new location for the event that would accommodate more people but also have historical significance.

Harry and her team decided on the Innovation Quarter, once Winston-Salem’s predominantly black business and entertainment district. These businesses surrounded R.J. Reynolds Tobacco Co. that used to employ many African Americans in its downtown factories—many of these buildings now house the day-to-day activities of the Innovation Quarter.

Harry had some practical reasons in mind when she approached Yarborough about moving the festival to the Innovation Quarter. Wake Forest Biotech Place provides an air-conditioned venue for senior citizens who can’t tolerate the heat but want to commemorate this milestone event in our nation’s history. Gospel, Motown music and more than 30 exhibitions featuring arts and crafts, health resources, merchandise and historical displays will be located in Biotech Place. Adjacent Bailey Park will host musical groups, such as jazz, R&B, blues and African dance performances.

While the location was practical, the historical significance of the Innovation Quarter to Winston-Salem’s black community sealed the deal.

The festival hopes to attract a larger, more diverse crowd, according to Harry. Its aim is to instill “a greater appreciation for the people who’ve gone on before us,” she says. “Even though we’re having a lot of fun, we have to remember that freedom isn’t free.”

“How can we pay it forward?” Harry asks. Her grandmother showed how to pay it forward a half century ago when she urged her granddaughter to satisfy her thirst. “She was saying that we’re all equal,” she explains.

The Juneteenth Festival passes along that lesson. No one knows better than Harry how simple words of encouragement can empower people and change their lives. For her, it started with a drink at a water fountain.