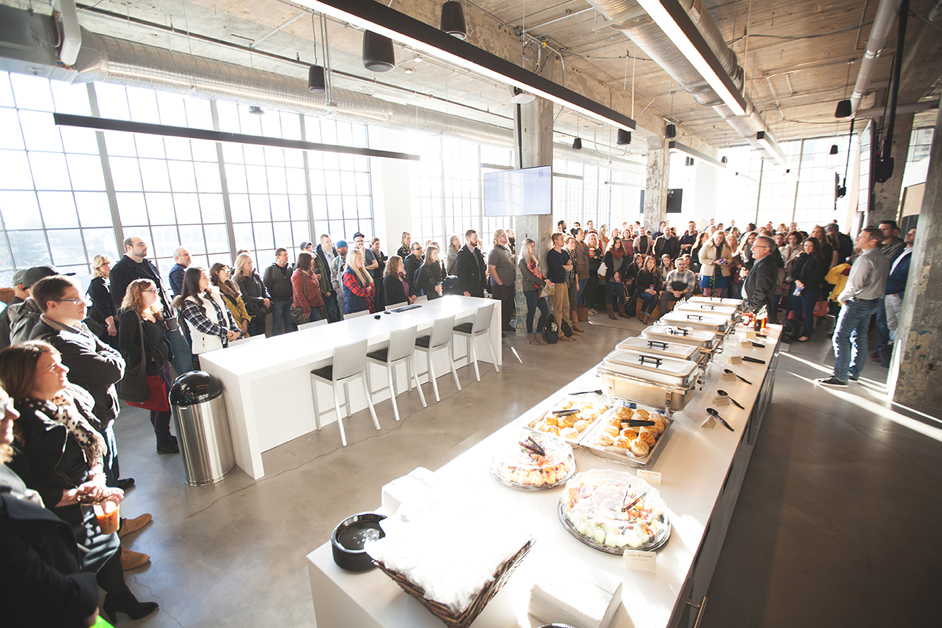 It’s an age-old question: How do you build a reputation for creativity in an industry that is—at its core—creative?

For Mullen Lowe, one of the top ad agencies in the world, the answer lies in thinking differently. About everything.

“Fundamentally, Mullen Lowe believes that creativity is one of the most powerful forces driving brands and businesses today,” says Taylor Bryant, president of Mullen Lowe’s Winston-Salem office. “We believe that fresh, original thinking expressed in great creative work is the greatest value we can bring to a client.”

Mullen Lowe Winston-Salem’s pursuit of thinking differently was recently manifested in its search for office space — a search that landed it as Wake Forest Innovation Quarter’s newest company. With operations now located in 525@vine, Mullen Lowe Winston-Salem joins a thriving knowledge community that is increasingly using proximity to drive collaboration.

Having outgrown their old location on North Cherry Street, leaders at Mullen Lowe Winston-Salem asked what a space designed to cultivate collaboration and creativity would look like.

There are no offices, no cubicles. Everyone will be working in community—including Bryant. The open floor plan is arranged around group work spaces such as glass meeting rooms, diner-style banquettes, collaboration hubs and a town hall that can seat almost the entire company. The open style seating arrangement provides room for all employees to work in groups.

“We want all our work to happen in collaboration,” says Bryant.

Mullen Lowe’s innovative approach to physical space grows out of a model they call “hyperbundling.”

“Hyperbundling is our way of being fully integrated,” Bryant said. It represents the unique mashup of skill sets, resources and creativity that Mullen Lowe brings to the table when developing advertising for their clients, which include the likes of Ulta Beauty, Hanes, PepBoys, Lenovo and ADP.

Mullen Lowe Winston-Salem consists of 150 people who provide a vast array of expertise in strategic planning, analytics, digital marketing, social marketing, offline and online media planning and buying, account management, creative services and marketing to women. When addressing a client’s project, experts in all these areas are in the room to help create the best approach for the individual project.

The hyperbundled model, however, does not mean that Mullen Lowe sells all of these in-house services to each client, but rather the ad agency will surround each individual project with the expertise needed to craft the best approach for that particular project – even if the best talent for the job is not located in one single Mullen Lowe location.

CSX Corporation is a prime example. As one of the largest transportation companies in North America, CSX came to Mullen Lowe Winston-Salem with a problem: no one understood their intermodal rail transportation services. Many people are familiar with CSX’s tagline: “How Tomorrow Moves.” Few, however, actually understand how CSX moves freight using more than just trains or the benefits of this practice.

To help explain intermodal transportation and its benefits, Mullen Lowe Winston-Salem set aside traditional ads and developed a sixteen-part animated series called The Intermodals to educate people about the freight shipping process.

“To create this series, we built a set in our offices that was a true scale model of a CSX freight rail yard. We filmed the entire Intermodals series from it,” said Bryant.

When it comes to solving our clients’ problems, we don’t have bias towards a particular type of idea or standard solution.

The hyperbundled approach also led to a unique way to help Jet Blue – one of the most recognized brands in the airline industry – cut through the advertising clutter.

Mullen Lowe’s project team set up a series of stunts for Jet Blue in Penn Station, New York. In some of these stunts, actors played taxi cab drivers who attempted to charge passengers for any luggage that was placed in the trunk and was not “carried on,” while concealed cameras recorded passengers’ reactions.

These spots, which were seen on platforms like Hulu and YouTube instead of airing like standard television commercials, bore the tag line, “You wouldn’t settle for it on the land, why would you settle for it in the air?,” reminding customers that JetBlue still offers standard amenities that other airlines now charge for. The tongue-in-cheek ads garnered a lot of attention, with The New York Times reporting that the campaign had a little fun at the expense of JetBlue’s competitors.

Though the advertising group often creates outside of the box, they do also produce work for more traditional media—if it best suits the client’s needs. Mullen Lowe is responsible for an award-winning commercial for Monster.com called “When I Grow Up,” which aired during a Super Bowl and ranked second on Business Insider’s list of “Super Bowl Commercials That Launched Brands.” This year, the agency also received the North American Grand Effie award, which recognizes effectiveness in marketing, for their “World’s Toughest Job” spot created for American Greetings.

“When it comes to solving our clients’ problems, we don’t have bias towards a particular type of idea or standard solution. Our only bias is to solve clients’ problems with the mix of insights, ideas and media choices that are right for their needs,” said Bryant.

And sometimes the best way to solve your clients’ creative needs starts with solving your own. In the case of Mullen Lowe Winston Salem, a new inspirational space in the heart of the Innovation Quarter, where collaboration and proximity is the spark to fresh creativity and new partnerships, may just do the trick.