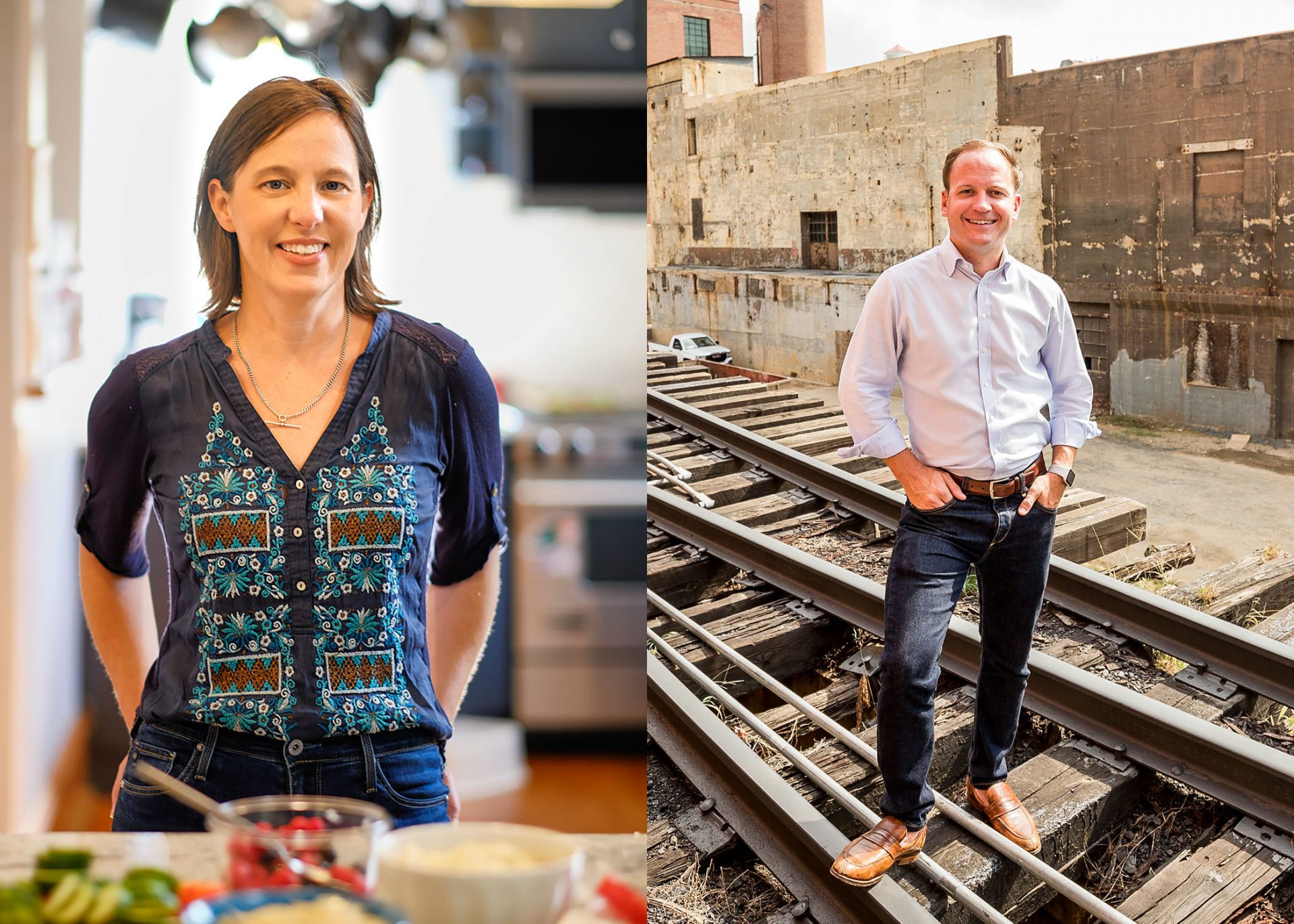 In the kitchen of The Porch, a restaurant in the West End neighborhood of Winston-Salem, Claire Calvin is surrounded by a team methodically preparing hundreds of meals, even while its dining room sits empty. Like a choreographed dance team, her staff moves with intention, making sure to implement safe social distancing practices while crafting trays of enchiladas and vats of salsa. The smell of black beans and benevolence fills the air.

Across town, for developer Coleman Team of local development group Front Street Capital, it’s business “as usual” at the future Bailey South site, where construction continues to progress each day. Construction teams are still able to get their work done, albeit while practicing similar social distancing restrictions, such as limiting the number of workers on site.

Both Calvin and Team are successful Winston-Salem entrepreneurs. Both are affected by the COVID-19 pandemic, although in different ways. And now, both are linked for another reason.

Although Team’s real estate development enterprise has not been thwarted in the same way as Calvin’s businesses, his ties to the entrepreneurial community have left him feeling compelled to do something—anything. “Because we’re in real estate, we’re thrust into the fabric of the community. Our business is to build, and we feel a responsibility to be community builders,” says Team.

The driving force behind his dedication to supporting the community is more than good business. It’s personal for Team. “Working downtown for 10 years now, I’ve been lucky enough to meet a guy who has opened my eyes to a part of our population that I wouldn’t otherwise experience—like health and food concerns, looking for places to stay,” he says. “Through him, I’ve gotten to know the path of a homeless person who lives here.”

That sense of responsibility and restlessness translated into action for Team after that same friend informed him that the Bethesda Center for the Homeless was struggling to secure meals for its guests and volunteers because of the health crisis. “Spending so much time downtown, I walk with these people every day. It’s easy to walk by them, but engaging pushes you to want to make a difference,” he says.

Now, he had an idea of what to do, but he knew he couldn’t do it alone. That’s how these two Innovation Quarter entrepreneurs came together to serve a larger purpose.

“I’ve known Claire for years,” says Team. “She’s a good friend and advocate for the restaurant community. Since she’s a leader in the community, my first thought was to reach out to her to see how we could work together to make a difference.”

The idea: restaurant patrons donate meals, at a discounted price, to those in need by ordering from a “Give Back” menu. These meals get delivered to places where they’re needed the most, providing an opportunity for patrons to support local businesses while helping the local homeless population, at-risk youth and first-responders. “So many people felt helpless. Now, you can sit safely at home with family, but you know your donation provided a meal for vulnerable individuals,” says Calvin.

And with Calvin also down to a lean team—having moved some of her Alma Mexicana employees over to The Porch in attempts to keep them staffed—this idea represented an opportunity to give back while keeping people employed.

Thanks to donations from leaders like Team, Calvin and her staff have delivered over 1,000 meals to organizations like City with Dwellings, Samaritan Ministries and the Bethesda Center for the Homeless.

They have also delivered food to local hospitals: “Being able to offer a meal provides a smile for nurses or emergency room staff—whether they need it for survival or just to lift spirits,” Calvin shares.

Team’s initiative, as well as other initiatives like Fuel the Fight, have worked with Calvin to deliver meals. The developer used his network to contribute to the fund, which has now raised almost $20,000 as of mid-April. “The community was eager to support something that had such an immediate impact,” he says.

The fund has collaborated with multiple restaurants, like Milner’s Southern Cuisine and Riverbirch Lodges, to spread the monetary love. Calvin has encouraged this effort by coordinating outreach to other restaurants: “She could be selfish, but she wants to put the community first,” he confides.

As a small business owner, Calvin admits it’s going to take a collective effort from the federal government and the local community to restart the engine of the restaurant industry. “It’s going to be a new landscape,” she shared. But she is hopeful nevertheless. “It’s hard to look at the future, but we will reopen.”

But the fight can’t end here. “This is just a bandaid…Our community has a lot of problems, and while we may not find the solution, we can try to make a difference. Hopefully, people see this and feel inspired to pay it forward,” says Team.