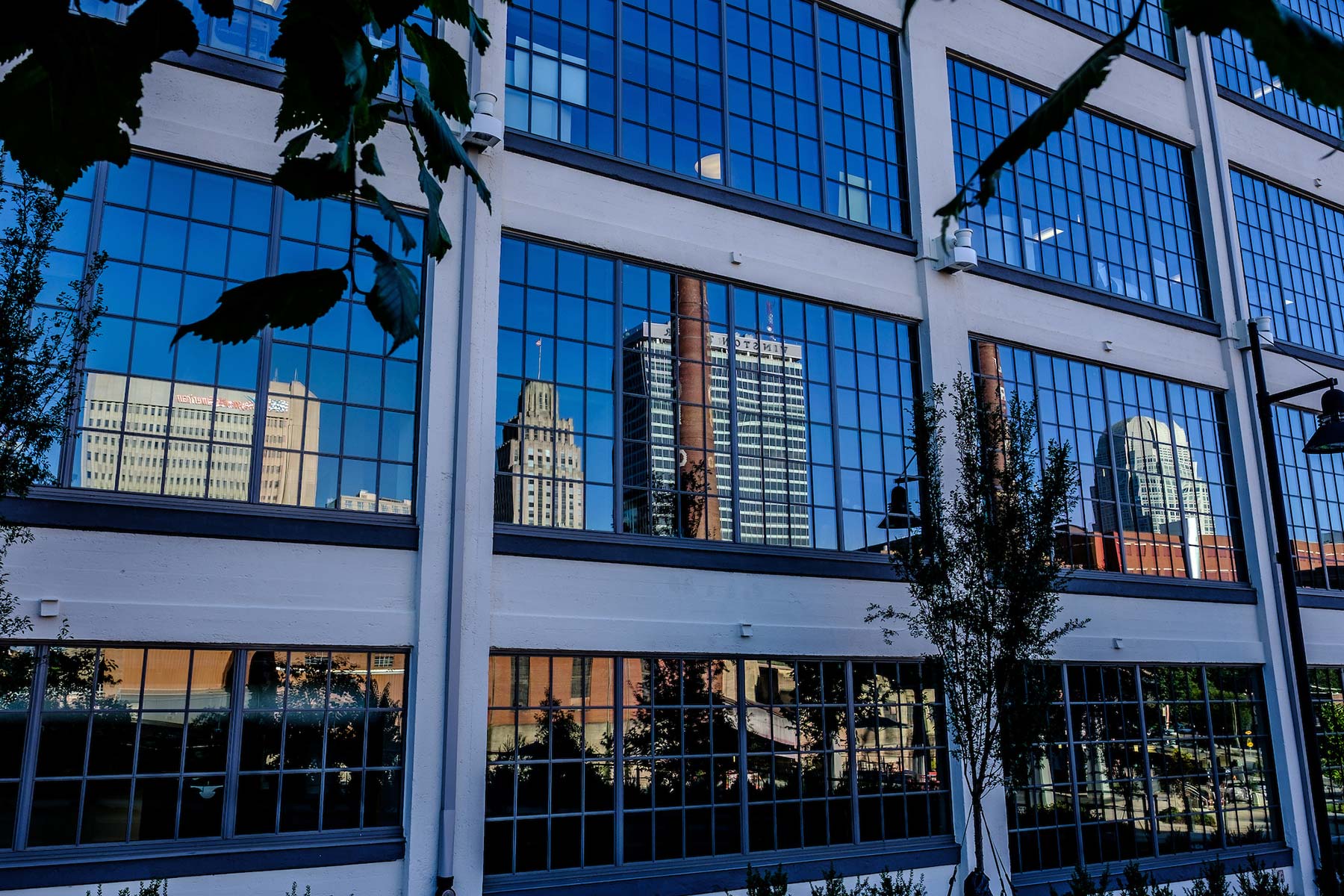 In a sunny corner meeting room at Flywheel Coworking, complete with a view of Bailey Park and downtown Winston-Salem, Aaron Lazarus gathers with his closest advisors—an entrepreneur, a business school professor and a pharmacologist.

At 24 years old, Lazarus is the founder and chief executive officer of EncepHeal Therapeutics, a biomedical start-up that aims to improve the lives of the 23 million Americans suffering from substance addiction and other mental health diseases. Don’t let his age fool you; he’s doing some serious science.

Lazarus’s path to the Innovation Quarter and his partnerships with members of Wake Forest institutions stems from his undergraduate experience at Wake Forest University where he earned a biology degree in 2014 and a master’s in management the following year. As a biomedical entrepreneur, he models the Pro Humanitate motto of the university.

For Lazarus, the “for humanity” motto has been a big influence on him as a person and his life’s direction after losing a friend to drug addiction. He sees his start-up venture as an opportunity to really help people.

Wake Downtown is a wonderful addition to the unique ecosystem we are building in the Innovation Quarter.

Soon Wake Forest University will take a daring step to more effectively grow graduates like Lazarus. At the beginning of 2017, they will open new doors for students to combine their interests in science, medicine, research and entrepreneurism as three new academic programs—in engineering, biochemistry and molecular biology, and medicinal chemistry and drug discovery—will be housed in a renovated tobacco factory within the Innovation Quarter, aptly named Wake Downtown.

“Wake Downtown is a wonderful addition to the unique ecosystem we are building in the Innovation Quarter,” says Eric Tomlinson, president of Wake Forest Innovation Quarter. “It has taken significant contributions from many groups and individuals – from the Medical Center, Wake Forest University, Wexford Science + Technology and city and county government—among others—to develop this district into an ideal environment for collaboration.”

Wake Forest University believes that moving an undergraduate presence into the Innovation Quarter will encourage strategic partnerships like those that Lazarus has built within the innovation district. The university wants students in the new programs to be in close proximity to the faculty and research conducted at Wake Forest School of Medicine—located under the same roof of the horseshoe building they will both occupy—as well as the variety of innovative companies and institutions present in the Innovation Quarter.

“The frontier of science and technology has rarely been as exciting as it is today. While many Wake Forest University students already work with research mentors from the School of Medicine, the next-generation building complex that literally and figuratively brings medical and liberal arts education together under one roof will greatly enhance students’ opportunities for closer collaboration and deeper engagement,” says Wake Forest President Nathan Hatch.

He adds, “Wake Downtown presents a wonderful occasion to rethink how science is taught and how learning is best achieved.”

This “wonderful occasion” started with a simple question.

It was 2014, and plans had not yet been formally announced for the building of what is now the new Bowman Gray Medical Education Building. But Wake Forest University’s financial aid director Bill Wells and Provost Rogan Kersh, the University’s chief academic officer were in the know, and they were inspired by the bold move.

“I wonder if the Reynolda campus could ever have a presence downtown?” Wells casually asked Kersh.

Wells’ question planted a seed in Kersh’s mind that germinated quickly. He wondered what opportunities could grow out of locating undergraduate academic programs in the Innovation Quarter, a former tobacco district turned hub of medicine and innovation in biomedical science and information technology. The School of Medicine’s move would contribute to downtown Winston-Salem’s burgeoning knowledge-based community—adding to the innovation ecosystem focused on building vibrant community and driving economic growth.

Kersh approached President Hatch with the idea. As it turns out, Hatch was already thinking about how undergraduate students could benefit from and contribute to the future of medicine and innovation in biomedical science.

Hatch saw a possibility to create numerous collaborative opportunities for students, faculty and researchers, as well as the communities they serve. Kersh also believed that moving students downtown could enrich their connections with the larger Winston-Salem community.

To Hatch, Kersh and the broader Reynolda campus, the potential gains seemed worth the risk.

Making Wake Downtown a reality was easier said than done.

“The kind of vision, cooperation, determination and sheer grit that it took to transform old tobacco manufacturing buildings into a modern research and education mecca in the Innovation Quarter has just been remarkable,” Hatch says in the Fall 2016 edition of Wake Forest Magazine, which features the University’s new frontier in the Innovation Quarter. “It took huge vision and creativity by people involved.”

Though they share a name and the community often views them as one, Wake Forest University and Wake Forest Baptist Medical Center have operated historically as separate entities. And yet, the process of developing the downtown space brought out a collective mindset and spirit from people working on the project in ways perhaps not seen since Wake Forest University relocated from the town of Wake Forest in 1956 to be closer to the medical school bearing the same name.

Following the approval of the Board of Trustees, the Wake Downtown project moved at hyper speed—unusual in higher education, but indicative of the collective motivation to make the new space a reality.

With more than 115,000 square feet to develop on the South side of the 60s Series building, Wake Downtown would provide state-of-the-art classrooms, teaching labs and research labs alongside the Bowman Gray Center for Medical Education, which welcomed its first students this summer.

Early in the design phase of Building 60, the building blueprints showed separate entrances for each institution, a metaphorical reminder of their separateness, but as the institutions worked more closely together, architectural plans ultimately evolved to feature one main entrance and shared lobby.

Kersh credits an interdisciplinary Wake Forest University team for the rapid progress of Wake Downtown. This team organized more than 50 working groups from both institutions to address everything from shared security to new academic offerings.

“The level of interest and the enthusiasm from everyone involved has been enormously rewarding. We were ‘carpe diem-ing’ all over the place,” Kersh says with a laugh.

For Kersh, the move into the Innovation Quarter is a homecoming of sorts. As a high school student, he attended Governor’s School West located at Salem College in Winston-Salem and remembers a field trip to the R.J. Reynolds Tobacco factory and the sweet, cloying scent of tobacco. When he graduated from Wake Forest University in 1986, he never imagined he would return to oversee the University’s academic programming during such a significant move.

“To come back and see the wonderful, evolving renaissance of Winston-Salem with one important part being the rebirth of RJR manufacturing as Wake Forest Innovation Quarter is both poignant and inspiring,” he says. “It feels like a microcosm of the United States’ economy—from big manufacturing to the next generation of start-ups featuring striking breakthroughs in biomedicine, health policy and engineering. It’s historically transformative.”

When Wake Downtown classes begin in January, few will be as excited as Bobby Grady and Mary Finger, two juniors at Wake Forest University who have just declared their majors in chemistry and have their eyes on futures in medicine.

They and their fellow students will have increased exposure to the world of biomedical research through opportunities like drug synthesis classes and undergraduate research programs. Grady believes the upcoming Wake Downtown opportunities will better prepare him for life after Wake Forest; he plans to fully engage in as many of them as possible over the next two years.

“It’s a fantastic addition to the University for science-minded individuals,” Grady says.

Finger agrees and the anticipation of taking lab classes in a modern space with new equipment and resources is like “waiting for Christmas morning.”

“I believe this new program will be immensely beneficial because it will provide a better and more efficient space to learn,” Finger says. “In the big picture, I believe that any undergraduate, researcher, professor or staff member who has the opportunity to participate in this program will be able to gain valuable insight and learning.”

In the same way that global abroad studies give students exposure to new cultures and perspectives, Wake Downtown will expand students’ opportunities for research mentorships and deep engagement with doctors, scientists and entrepreneurs in biomedical-related businesses and wet lab incubators.

“The Innovation Quarter includes people with a wealth of experience,” Tomlinson says. “Bringing a new group of students and academics into the community offers exciting opportunities for us all.”

“For the first time, we will be able to bring the Reynolda Campus and the School of Medicine into a durable, authentic programmatic collaboration. We have the opportunity to leverage the tremendous resources in our outstanding, highly selective School of Medicine on behalf of our undergraduates,” Hatch says. “We will have much closer collaboration—and physical proximity of faculty—so that other innovative programs in STEM teaching and research are likely to be generated.”

Because of Wake Downtown, students like Grady and Finger might more easily traverse the path that Lazarus has found himself on.

From the corner meeting room in Flywheel, Lazarus can literally see the past and the future coming together before his eyes in Wake Downtown.

“It’s not only good for us, but for everyone. There’s so much opportunity here,” Lazarus says. “Everyone on the EncepHeal team is a byproduct of Wake’s education whether it’s the Reynolda Campus or the School of Medicine. Wake, in all its forms, is really good at finding driven people who want to accomplish something great.”

Opening Doors for Minorities in Research

Meet Lanazha Belfield. A self-proclaimed “science nerd” who’s “pretty much living in Biotech Place” these days, exercising mice and working toward a Ph.D. from Wake Forest University. If you’d asked…

The Rich History of Black-owned Business in Winston-Salem

Since opening its doors in 2003, Krankies Coffee has become a pillar of Winston-Salem’s burgeoning downtown and Innovation Quarter scene. Located at the corner of East Third Street, or what…

Javara Grows in the iQ, Removes Barriers to Clinical Trials for All

As Javara commemorates its fourth anniversary, we're celebrating its rapid growth, dedication to innovative medical research and inclusive health equity in local communities.   A New Research Model is Born in…