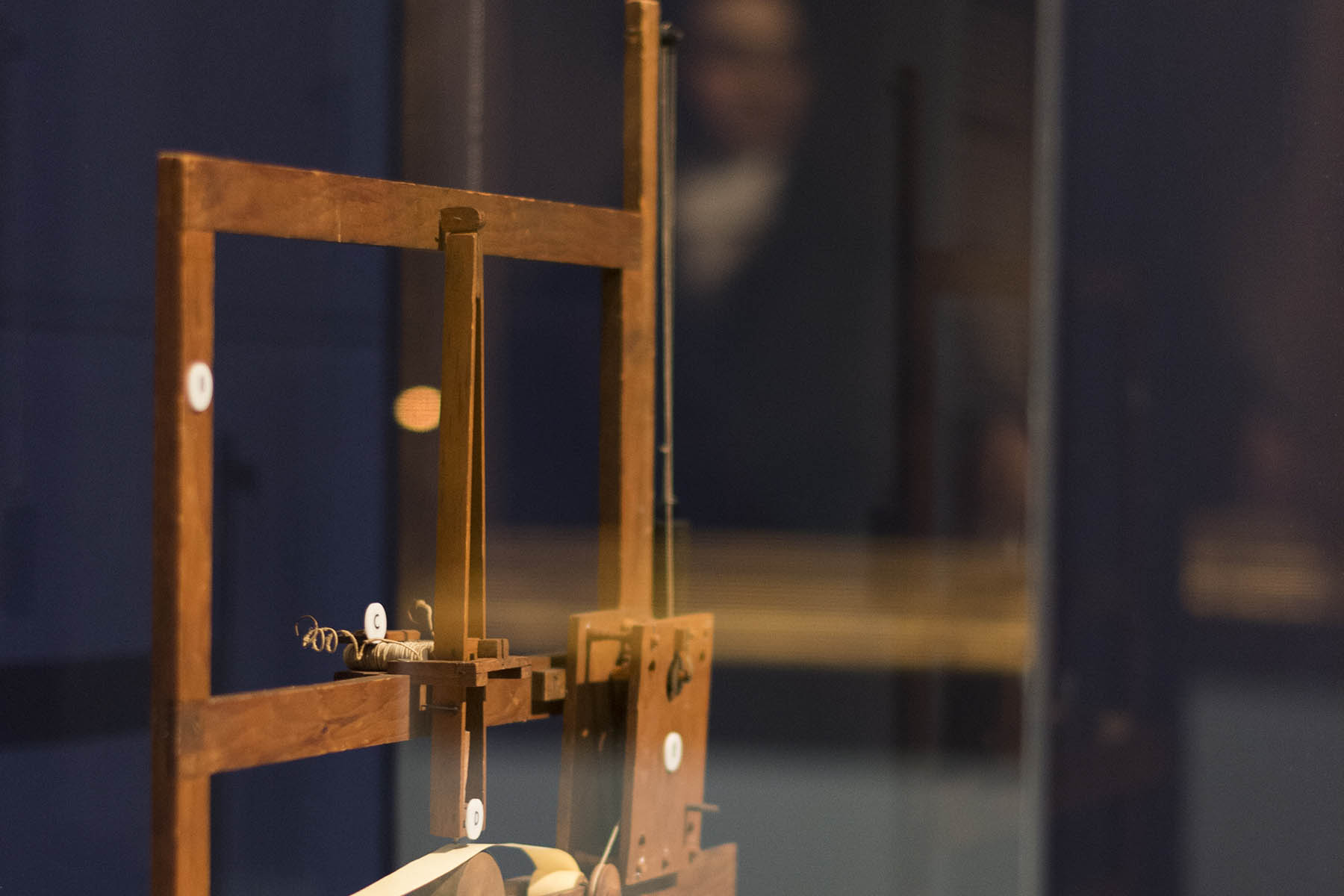 1835: Wires of all kinds are strewn about his New York studio. The renowned American artist Samuel F. B. Morse has cannibalized the canvas stretcher he used for his paintings to use the pieces for his machine. Seeing this, Morse’s students at New York University react in horror at the thought that their teacher—one of America’s first art teachers and founding president of the National Academy of Design—has abandoned his artistic career.

On the heels of creating arguably his greatest artistic work—Gallery of the Louvre—Morse was creating something new, something that would be his greatest invention: the single-wire telegraph. To Morse, the invention was not a rejection of his career. To him, these two endeavors were one and the same. For him, they shared the same purpose: the communication of ideas.

Reynolda House Museum of American Art is putting both of Morse’s greatest achievements—the Gallery of the Louvre and the single-wire telegraph—on display in their new exhibition, “Samuel F. B. Morse’s Gallery of the Louvre and the Art of Invention,” co-sponsored by Wake Forest Innovation Quarter and Wake Forest Baptist Medical Center from February 17, 2017 to June 4, 2017.

“It’s a surprise to people that Morse, whom we think of as the inventor of the telegraph and Morse code, was an artist at all, not to mention a famous American artist,” says Philip Archer, the Betsy Main Babcock Director of Program and Interpretation at Reynolda House. “Morse was both—an artist and an inventor—and to him, both come from the same place.”

There is no better backdrop for an exhibition that explores the nature of the relationship between art and invention than a city like Winston-Salem.

“Winston-Salem is a city of arts and innovation, and there really isn’t a person in the history of American art who exemplifies those pursuits better than Samuel Morse,” Allison Slaby, Reynolda House curator, says.

Samuel Morse, the Artist, and the Gallery of the Louvre

1825: What should be a highpoint of Morse’s artist career—a commission to paint a portrait of the Revolutionary War hero Marquis de Lafayette in Washington, D.C.—is overshadowed when Morse receives a letter notifying him of his wife’s death. Though he leaves immediately for Connecticut, he does not make it home before she is buried. Devastated, the artist determines to find a faster way to communicate across vast distances.

The grieving artist undertakes a three-year tour of England, France and Italy just a few years later. He plans to develop his artistic talents by studying the great European masters. He’s so taken by the great artists displayed in the Musée du Louvre that he develops a plan for sharing their accomplishments with his countrymen across the ocean—the product of which will be considered the pinnacle of his artist endeavors.

What transpires from Morse’s European journey is his painting Gallery of the Louvre, a pivotal piece of American art history. When Daniel Terra, a Chicago businessman, bought the work of art in 1982, the $3.25 million price tag was the highest paid for any piece of American art to that point.

When Morse painted Gallery of Louvre, his plans for the work were grandiose. The painting, which measures six feet tall and nine feet wide, is monumental. It portrays a fictitious arrangement of paintings in one of the galleries of the famous Musée du Louvre in Paris, France. Within that gallery, Morse recreated 38 real-life Renaissance and Baroque masterpieces from 22 of Europe’s greatest artists.

Morse painstakingly recreated these master works in miniature so that Americans could experience, appreciate and learn from the greatest painters in the world. At the time, there were no major metropolitan museums in the United States. Without traveling to Europe, Americans would never get the chance to see works by the likes of Rubens, Rembrandt and Titian. Morse created the Gallery of the Louvre to rectify that deficiency.

“With this painting, Morse was saying that, out of the whole European tradition, this is what Americans should be learning about and studying,” Archer says.

The Gallery of the Louvre exhibit at Reynolda House continues Morse’s instructive intention by drawing out some of the themes in Morse’s masterpiece.

“It’s a really, really complex work of art,” says Slaby. “We identified different themes in it and used paintings and prints from our own collection and from Wake Forest University to explore these themes further.”

Some of the themes of the painting include the transmission of culture, religion, the classical world, democracy, portraiture and invention. The Reynolda House exhibition provides a portrait of the nation in Morse’s time, exploring these themes through works by other artists to create a picture of the world in which Morse lived, painted and invented.

Samuel F. B. Morse, Man of Many Firsts

You may know Samuel Morse as a painter and inventor, but his interests spanned many disciplines. Here are some of the other “firsts” that Samuel Morse achieved.

Father of the Telegraph
He became known as “the father of the telegraph” because of his invention of the single-wire telegraph machine and co-development of Morse code with his colleague Alfred Vail.

America’s First Professor of Art
His art lectures and years spent teaching at what would become New York University earned him the title of “America’s first professor of art.”

First American Photographer
Morse is called “the first American photographer” because, after studying with Louis Daguerre in Paris, he introduced the daguerreotype to the United States and taught some of America’s earliest photographers, including Matthew Brady of Civil War fame.

Samuel Morse, the Inventor, and the Telegraph

1832: Morse heads home to America by ship. His instructional painting is tucked away, awaiting what he hopes will be a grand, triumphant tour of his beloved nation. But even as he looks forward to arriving in America, thoughts of another kind of communication fill his mind.

On the journey home, Morse meets Charles Jackson, a physician and scientist, and the two speak at length about electricity and electromagnets. The conversation ignites ideas for Morse about how to visually record communications sent across long distances, and the artist begins to sketch a new subject: a machine that communicates in a way the world had never seen. His fellow passengers recall him asserting that if electricity could pass through a wire than it must be possible to transmit ideas, too.

When he returned to America with his grand work, it was met with tepid enthusiasm. It was not a financial success, and the grand tour amounted to being shown in only two places.

In bitter disappointment, Morse turned away from painting for the last time and began inventing in earnest. Morse had been an innovator all his life. Even while earning a living as a painter, he was inventing devices and experimenting with artistic techniques and materials. His transition was a natural one.

Morse was not the only one working on a telegraph. Several European inventors were also hard at work trying to develop machines to communicate over long distances using electricity.

“Up until this point,” says Archer, “information has been relayed through tangible items like paintings and print. This is really the beginning of communicating through electricity.”

Morse’s telegraph was more efficient than other prototypes because it used a single wire. It was also much more reliable because it produced a record of the transmission by using electromagnets to print on paper. Using a different telegraph, the reader would have to watch a needle and transcribe the message they saw, which was far from reliable.

Morse’s invention revolutionized communications and ushered in the information age. The inventor lived long enough to see his telegraph become used worldwide and see the laying of the Transatlantic cable that allowed continents to communicate information to each other.

What started as a perceived failure to communicate through the Gallery of Louvre ended in revolutionizing culture through quick, far-reaching communication.

Art and Invention in Winston-Salem

In 2010, the Terra Foundation in Chicago—home of Gallery of the Louvre—took on a major project to conserve and restore Morse’s painting. Through the process, details in the painting that had been obscured by damage, age and previous restorations were made visible again. The Terra Foundation decided to send the painting on a national tour that mirrored the one Morse originally envisioned. Several curators from Reynolda House made the pilgrimage to see the Gallery of the Louvre in different cities on its national tour.

Community Day: Americans in Paris
Saturday, April 29, 11 am – 3 pm
This free community festival is open for the whole family! Visit the Samuel F.B. Morse exhibit and experience what it might be like to visit a park in Paris in the spring. Enjoy the fresh “French” air, accompanied by refreshments, performances and artists.

Reynolda Thursdays
March 16 & May 11, Museum open until 8 pm
Enjoy these after-hours events for only $5. Experience hands-on activities from Mixxer, Wake Forest Innovation Quarter, Kaleideum (formerly SciWorks and the Children’s Museum of Winston-Salem) and the Center for Design Innovation.

Merge Event
March 30 (Time TBA)
The bi-annual “Merge” program brings together local knowledge experts—one from the arts and one from the sciences—who share an unexpected connection. For this special Merge event at Reynolda House Museum of American Art, the Innovation Quarter will feature individuals who, like Samuel F.B. Morse, embody both the scientific and artistic mind.

“After getting to spend a whole day with the painting at a scholar’s day at the Pennsylvania Academy of Fine Arts, I knew we had to bring it to Reynolda,” says Slaby.

Archer felt the same way. “People at Reynolda House were thinking about how the story of this painting and the telegraph mirrors the story of Winston-Salem,” he says.

Winston-Salem is a city built on innovations and has periodically re-invented itself as industries change. Now, the city is building its reputation as one of arts and innovation.

“Seeing how Winston-Salem has reinvented itself, especially through the building of Wake Forest Innovation Quarter, was a big motivator to get this exhibit,” says Archer.

Reynolda House lobbied the Terra Museum to get the painting, becoming the only museum in the Southeast to be a stop for the work of art.

“The Terra Museum challenged us to make the exhibition unique,” says Slaby. “Given our city’s history, the focus on art and invention seemed only natural.”

To support that focus, Reynolda House included early telegraph machines, borrowed from the Smithsonian National Museum of American History. To date, they are the only museum to exhibit both of Morse’s greatest creations together.

“When we started looking at the themes of art and invention, it only made sense to partner with Wake Forest Innovation Quarter,” says Archer.

“What happens when you put a cutting-edge creative firm next to a tech-savvy startup?” Tomlinson asks. “We hope it fosters a community of innovators—artists, inventors, entrepreneurs—anyone who wants to turn ideas into solutions. We want to nurture the Samuel Morses of our city, the ones with visions of new ways to communicate or do things.”

You can visit the “Samuel F. B. Morse’s Gallery of the Louvre and the Art of Invention” exhibition at Reynolda House Museum of American Art—on display from February 17, 2017 to June 4, 2017—to learn more about Morse and how his art and inventions fit into the fabric of America’s culture.

Black Horse Studio: Innovation and the Art of Photography