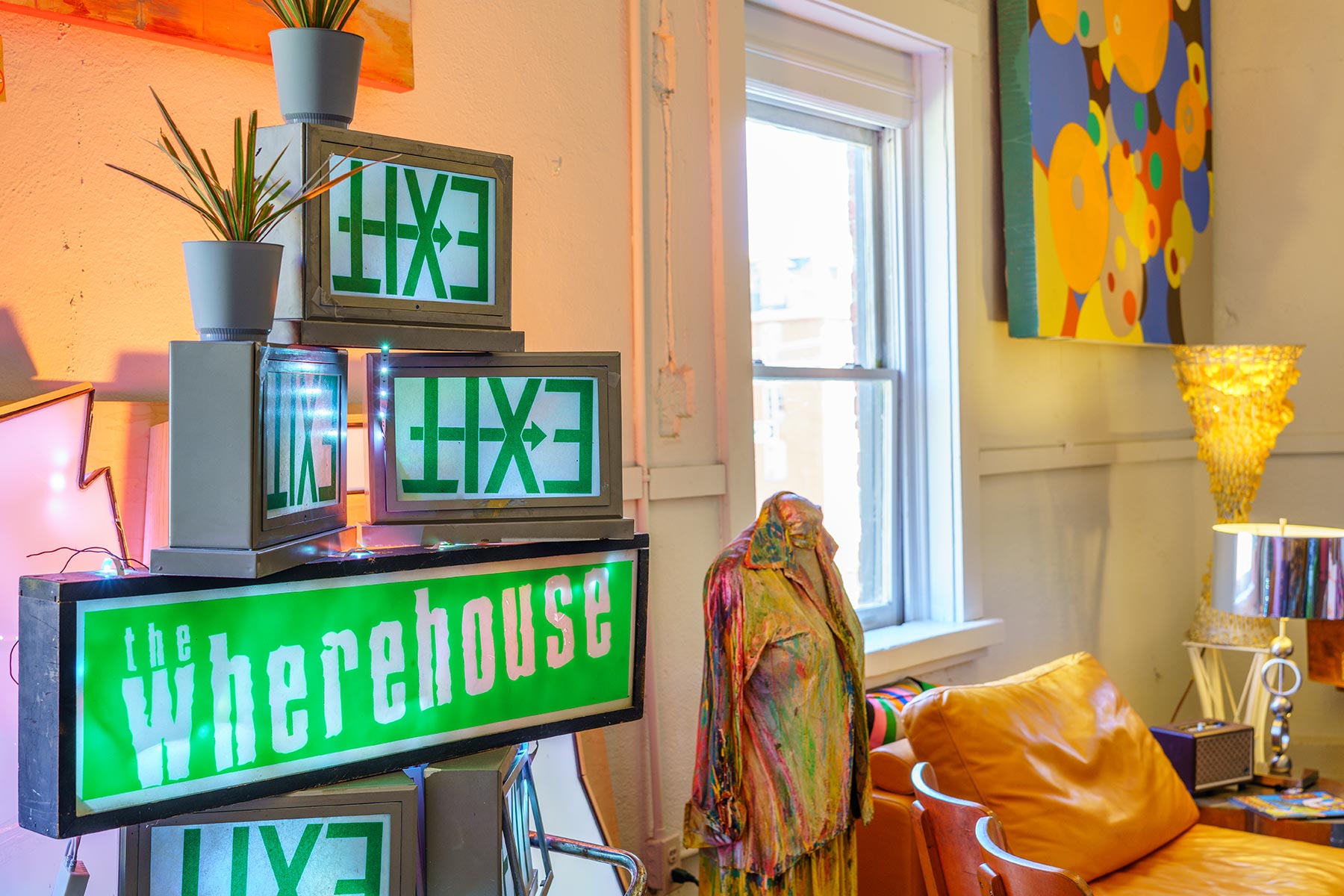 It’s a Monday morning in May, and Haydee Thompson has had a full house of guests—a couple wrapping up their extended honeymoon and a family from Portugal visiting for graduation ceremonies at Wake Forest University.

They all made their way here—East 3rd Street in downtown Winston-Salem at the Wherehouse Art Hotel. Rated the top wish-listed Airbnb in town, this extraordinary space above Krankies Coffee marries a curated art gallery and creative lodging in such a natural way that you can’t help but wonder why this hasn’t been done before.

But when you get to know Thompson, you realize that the Wherehouse Art Hotel (WAH) is what it is because of the “who” and “where” behind it.

Nearly three years into her time as its visionary proprietor, Thompson says she still gets a thrill from watching guests scope out the WAH for the first time. “By the time they walk through our doors, they usually just say ‘wow, photos don’t do this justice,’ ” says Thompson.

To find the WAH, you’ll make your way through a door inside Krankies and up a firecracker-red staircase that’s enveloped by vibrant paintings to the left and a twinkle light-draped chandelier to the right. Tiny tags hang from each piece, noting the local artists whose works greet both locals looking to shop and guests checking in for a night’s stay. Innkeeping may not have been Thompson’s initial career goal, but hospitality comes naturally, and she cares for her guests with a kind of thoughtfulness that can only come from a sense of purpose.

Thompson came to Winston-Salem in the mid-’90s to study acting at the University of North Carolina School of the Arts. “I was magnetized to the burgeoning art and music community, and even though I left for some time, I felt a strong draw to return,” she recalls as she bustles around the large kitchen, re-setting the common room from the weekend’s guests.

Much of that purpose is wrapped up in this storied circa-1912 building, a former meat packaging plant best known today for its anchor, Krankies Coffee. In the early 2000s, Thompson and 20-some other residents (their portraits hang in the hotel’s hallway today), known as the Wherehouse Artist Collective, moved in and transformed the abandoned spot into a quirky cultural hub, seeing it through a host of iterations as an experimental concert hall, a nonprofit performance space and ultimately hopping coffee house, roaster and cafe.

In late 2016, while juggling a server job and a performance schedule, Thompson says she felt a strong urge to revive some of the intentional community that had initially attracted her to The Wherehouse and kept her engaged in its two-decade artistic evolution.

“This sweet little spot of historical significance goes beyond its architecture,” she says. “Its significance is in its guts and its heart.”

With the blessing of the building’s owner, John Bryan, Thompson set to work updating her personal apartment. Within a month, she listed it as her first room on Airbnb.

Today, the Wherehouse Art Hotel boasts five guest rooms and tops the list of Winston-Salem’s most saved spots on the popular travel reservation site. Visitors enjoy amenities such as sun-splashed dining, living and kitchen spaces, stacks of board games, foosball and a central location in the Innovation Quarter. And the guests also have Thompson, a board member for the Downtown Winston-Salem Partnership whose two decades on this block offer a hybrid passion for the city’s cultural past and determination to help write its cultural future.

At the WAH, halls and walls are filled to the brim with color. From funky murals by Laura Lashley and Andrew Fansler’s mixed media sculptures to paintings by Liz Simmons and an iconic Art-o-mat, its collection is a collage of Winston-Salem’s eclectic makers.

Perhaps no space does this as well as the Gallery Room. Essentially an ever-changing gallery/guest room, this blank palette and its white walls welcome selected artists for one- or two-month takeovers. Given great freedom and very few rules, artists are encouraged to complement their installations with customized bedding and furniture placement. An innovative way to connect art makers and enthusiasts, the room immerses visitors in an overnight gallery exhibit and gives them a chance to purchase favorite pieces.

The room has hosted a range of styles in its tenure, from cozy quilts to ethereal paintings to eccentric pop-art. Guests staying in the Gallery Room last winter delighted in unexpected roommates. “Indoor Picnic featuring Paper and Uninvited Guests,” a two-month show by Nicole Uzzell that ran November and December 2018, featured a picnic basket made from hand-harvested grapevine, a colorful tower of “litter,” plus the stars of the show, more than three dozen steel and paper ants.

The process began six months earlier when Thompson extended the invitation. Uzzell, who specializes in paper and sculpture installation, teaches at Sawtooth School for Visual Art and is widely integrated into the local arts community, says she jumped at the chance to transform the Gallery Room.

“The Wherehouse Art Hotel is a golden opportunity for artists, both creatively and for business,” says Uzzell.

“The Wherehouse Art Hotel is a golden opportunity for artists, both creatively and for business,” says Uzzell. “This is a place in Winston-Salem where you can show installation art and not feel commercial pressure. You can focus on the experience and creating an environment without having to stress over sales.”

Shortly after accepting, Uzzell spent two weeks as an assistant papermaker at Penland School of Crafts in western North Carolina. It was there, immersed in the great outdoors, that she found her inspiration for “Uninvited Guests.” The next few months were hectic as Uzzell averaged one ant per night, devoting two hours to its steel armature, then dipping each ant in paper pulp approximately 10 times.

The installation’s other large element, “Litterbug Leftovers,” stretched from the ceiling to the floor and highlighted common picnic trash, such as plastic to-go lids, aluminum cans, napkins, newspaper, cardboard, paper plates, receipts and a vinyl tablecloth. Uzzell invited visitors to move the piece around, as well as leave their thoughts in the hand-crafted cotton/abaca paper guestbook titled “Spill It.”

The two prior Gallery Room artists positioned the bed along a wall, but Uzzell says she decided to move it to the middle of the room to create a viewing of the art in the round. Over the bed, white clouds—crafted from silk curtains and steel wire—lightly sway in the air from the A/C unit, a feature that delighted Uzzell when she had the opportunity to stay a night in the room.

“As an artist, I got on board immediately when I heard about the Wherehouse Art Hotel,” Uzzell says, “but this is an awesome opportunity for guests, too, to enjoy a hostel-like community where you can meet your fellow traveler. There’s truly nothing else like this experience.”

Mandy Locke was one of these lucky visitors who stumbled on the WAH on Airbnb two years ago when visiting a friend in Winston-Salem. An investigative reporter and adjunct professor from Raleigh, Locke has since stayed at the WAH more than two dozen times as she’s worked on a series for WFDD about housing disparities in the Triad.

She’s slept in every room, noting that each one not only has its own vibe, but that they each make you feel like you’re straddling time periods. Most importantly, she adds, “every space is comfortable and makes you feel alive in a way you wouldn’t feel staying in a non-descript chain hotel.”

When you’re here, you feel like you’ve been welcomed into the fold.

In many ways, Locke explains, the WAH is a mirror into its home. “From the moment you walk in, you know that this is a place that’s lived many lives—much like Winston-Salem. You see it on the walls through the artists’ work, you can feel it in the funky lines and turns of the rooms. There’s never a moment that you’re here that you aren’t cognizant of the story of this building and of its rebirth through its artist colony.”

Locke admits that her orbit is small when she comes for a stay, but she says she enjoys having everything she needs within reach, noting The Tin Can (“it’s not just a bodega—it’s an experience!”), Pink Rhino Beauty Parlor, Incendiary Brewing Co. and Cugino Forno. Of course, her go-to is still Krankies, on the floor just below. “I’ve probably eaten everything on their menu by now, and I know all the morning and evening staff,” she says, adding that its common for her to order a meal downstairs and take it back up to dine at WAH. “There’s a synergy between businesses that really enhances the guest experience.”

And although she says she’s not a classic artist, Locke adds that it’s easy to be embraced by the WAH’s creative energy. “When you’re here, you feel like you’ve been welcomed into the fold.”

When guests get what’s happening here, it makes a measurable impact on Winston-Salem’s artists. Local makers receive 80 percent of proceeds when pieces sell—more than at traditional galleries—and Gallery Room artists also get a portion of the room’s bookings, Thompson says, which gives them added ownership in the experience.

“It’s a common misconception that art is incongruent with business … that somehow having a commercial element to art cheapens it,” Locke says. “But the reality is that artists have to be fueled to get to their next project. Thompson’s hotel gives them an engine for this. This isn’t just a hotel that happens to have cool local art on the walls; this is an art gallery and guests just happen to be lucky enough to get to spend the night there.”

So, while Triad residents are always welcome to book an immersive staycation, Thompson admits the most impactful way to support the WAH and its mission is through purchasing its art. “We have highly curated, high-quality, thoughtful art that’s also affordable,” she promises. Monthly parties often coincide with Gallery Room openings, while biannual Art Marts offer a more expansive opportunity for art purchasing.

WAH is also open for patrons between events, as it makes a truly unique option for birthdays, celebrations and special events. Thompson says that now that she’s completed each of the guest rooms, she hopes to turn her attention to adding more art and hand-made goods into WAH, such as rugs, furniture and linens. Her eyes shift to a noticeably bare spot on the wall and her mental Rolodex starts working as she answers an unspoken question: “We just sold that big one, and I believe I have just the right replacement in mind.”

This intentionality has propelled the WAH for nearly three years, and it’s why this is so much more than novelty lodging or another gallery. “Thompson gives visitors, local artists and art collectors an opportunity to find each other and help each other,” Uzzell says. “She’s most certainly filling a void.”

By mid-morning Thompson has rooms to flip and more guests checking in soon. Steps from the door, she turns toward a stack of colorful posters for an upcoming Art Mart, picks from the top and eagerly hands them out.

“If you can’t make it, pass it along,” she says, knowing that’s just how it’s done here—one person at a time, spreading the word of this not-so-hidden gallery-getaway.