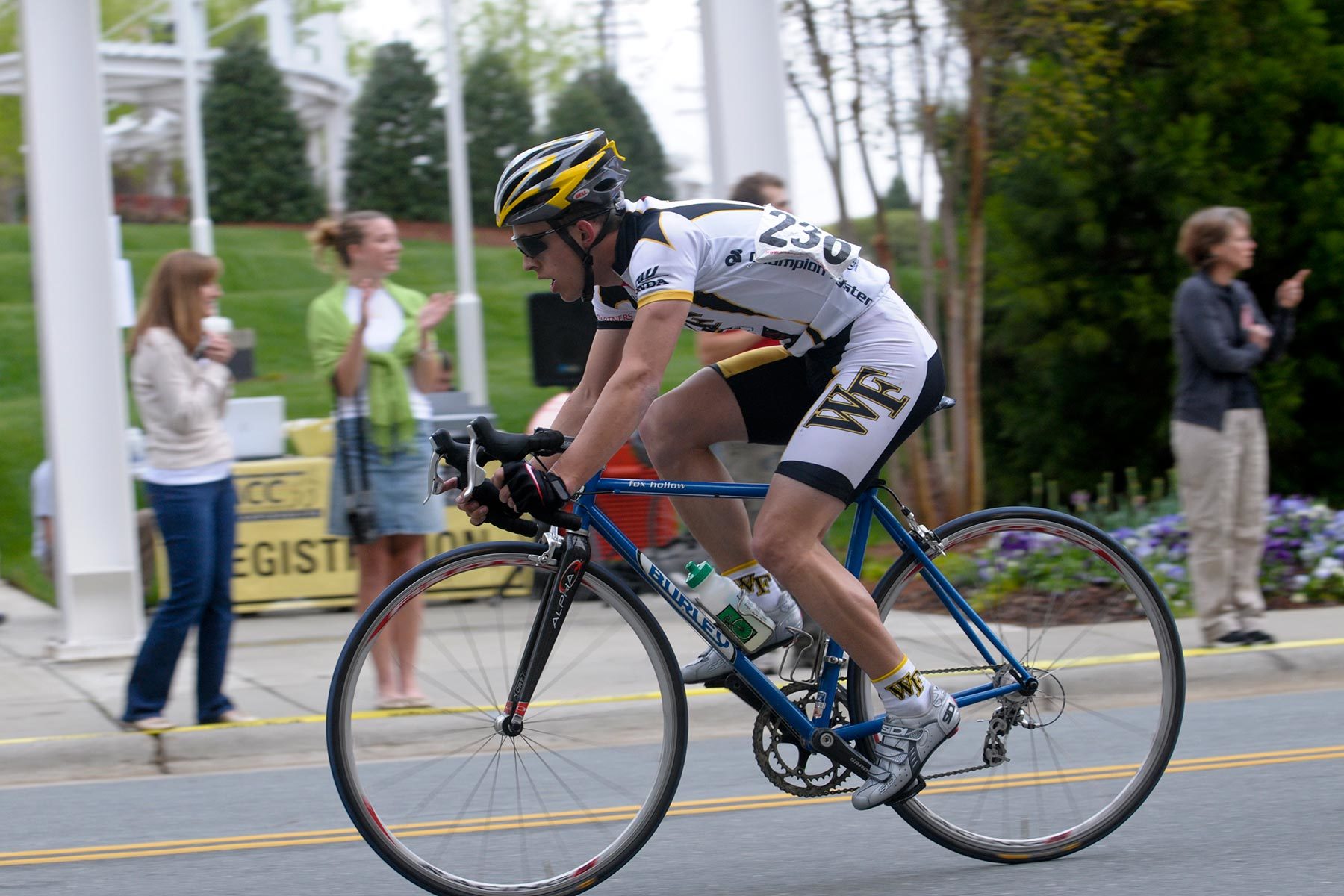 Hills are made for cycling. They’re a good starting point for understanding how Winston-Salem is emerging as an international cycling hub.

This transformation is embodied in the Winston-Salem Cycling Classic that takes place over Memorial Day weekend and attracts 3,000 professional and amateur riders and thousands more spectators to downtown.

Among the spectators will be Richard Rauck, the Cycling Classic’s executive director. The local anesthesiologist, pain medicine physician and avid cyclist plans to pedal his blue Trek from one vantage point to the next, making sure to stop to watch cyclists grinding up the steepest climbs, such as at Manly and Summit streets.

That’s where the races often get won and lost, on the tack up the mountain.

“That’s where the races often get won and lost, on the tack up the mountain,” Rauck says. “That’s where cyclists suffer the most. They’re moving slower. You get a better chance to see them.”

This year’s Cycling Classic takes place on May 29 and 30. The Cycling Classic is part of a week of activities that include the Volkswagen USA Cycling Professional Road Race and Time Trial National Championships. Both races are full with about 600 competitors. Another 1,800 cyclists are expected for USA Cycling-sanctioned amateur racing.

The event got its roots from a few cycling enthusiasts four years ago. Early organizers of the Cycling Classic sat not on bikes, but around Rauck’s dining room table. One seat was occupied by Ray Boden, director of the Winston-Salem Cycling Classic, who also serves as director of operations for the Winston-Salem Open men’s professional tennis tournament at Wake Forest University.

“I first talked to Rauck about the Cycling Classic in 2012,” Boden recalls. “We got together a few months later, and I remember him saying, ‘Let’s do it.’”

And they did, pulling together the first Cycling Classic in three months. Little did they know that the race would spark so much more.

The individuals responsible for the Cycling Classic are also refurbishing a nearly century-old building downtown into the nonprofit National Cycling Center that will operate as a training facility affiliated with USA Cycling.

There is such a passion for cycling here in Winston-Salem.”

“There is such a passion for cycling here in Winston-Salem that I’m not surprised these things are happening,” says Alex Ryan, a rider competing in Sunday’s Professional Criterium starting in Bailey Park in the Wake Forest Innovation Quarter. “I’m pinching myself because it’s such a great thing.”

Cycling clubs are proliferating in Winston-Salem and cycling shops are stocking and selling expensive bicycles, according to Boden. While there’s no official tally of growth in cycling, the Winston-Salem Department of Transportation has started counting riders in four locations around the city as a way to measure the need for public investments, says Matthew Burczyk, the city’s bicycle and pedestrian coordinator.

“Increased participation justifies additional public spending on bike trails and lanes and other improvements with the aim of making Winston-Salem a more bike-able community,” he says.

Burczyk cycles to work, and that’s how he plans to watch the weekend races. “It’s a great way to feel like you’re part of it,” he says.

Being a part of the event, even as a spectator, is quite a rush. Many spectators turn out for what Boden calls NASCAR on two wheels – blurring speed, the risk of pileups and bumping and shoving among athletes competing at the highest level to gain an edge.

“Cycling is one of the most dangerous sports on the planet,” Boden says. “When you see it for the first time, you’re blown away. There’s not a big difference between the guys racing in our event and cycling in the Tour de France.”

How much you suffer definitely shows how hard you’ve worked and trained.

On race day, hills are pivotal and draw the most spectators. Frontrunners attack and pull away from the field, or middle-of-the-pack cyclists slip further behind and out of contention.

“Everybody suffers,” says Ryan, who is also service manager at Mock Orange Bikes in Winston-Salem. He’s bracing for the climb up Vine Street, a 5.2 percent gradient on the figure-eight course he and his North Carolina teammates will pedal.

“It hits your legs and spreads,” he says. “All of a sudden you are out of breath. How much you suffer definitely shows how hard you’ve worked and trained.”

The hills are just one of Winston-Salem’s advantages for hosting major cycling races, according to Rauck. It’s a mid-sized city without sprawling suburbs, meaning cyclists can easily reach rural roads north and west of the city.

“North Carolina has become a sweet spot for cycling,” Rauck says. “In New York or Rhode Island, there is too much snow so you can’t ride there year round. If you’re in Florida, it’s too flat and probably too hot.”

Of North Carolina, he says, “Charlotte is too big and Raleigh is too big. The one advantage we’ve had over mid-sized cities like Asheville is community leadership.”

Due to efforts by local organizers, Winston-Salem has emerged as the host of one of only three U.S. racing events sanctioned by Union Cycliste Internationale, the world governing body for cycling recognized by the International Olympic Committee. The Amgen Tour of California and the Philadelphia International Cycling Classic are the only other sanctioned events in the U.S.

Rauck has traveled widely in the U.S. and abroad, connecting with top international cycling organizers to put Winston-Salem on the map with major racing hubs in France, Belgium, Japan, Brazil and Colombia.

On visits to Winston-Salem, USA Cycling executives have been impressed by the city’s cycling enthusiasm, which led to designating the new National Cycling Center at 505 N. Liberty St. as an official training facility. The group is seeking similar designation from the United States Olympic Committee, the same status granted to the U.S. National Whitewater Center in Charlotte.

“The clout and the integrity of the Olympics is such a powerful thing,” says Sterling Swaim, chairman of the board of the National Cycling Center. “People ooh and ah when you mention it. It is that cool, that big of a deal.”

All this momentum is bringing more than cycling to Winston-Salem.

Event organizers are expanding activities around the Cycling Classic. Bailey Park is one the venues hosting concerts as part of the Gears and Guitars Music Festival through May 29. Tickets can be purchased to a single event or as part of one of the four VIP packages also offering a two-hour ride and lunch with George Hincapie, Christian Vande Velde and other former professional racers.

It is not just a bike race; it’s an entertainment event.

As the event grows, Boden envisions more activities circulating around the Innovation Quarter. The redevelopment of the Bailey Power Plant, for instance, will possibly create another concert venue, he says.

“It’s natural for us to do some racing in the Innovation Quarter,’’ Boden says. “A lot of people who are cycling align with the demographic of people who are attending school there and working there. It’ a cool fit.”

And the presence of a cycling event so close to home is going to bring out new faces.

“People who don’t typically race are going to give it the old college try,” says Travis Beane, an amateur racer and co-owner of Clemmons Bicycle in Clemmons. “They are asking how often they would get the chance to compete in such an international-caliber race. It’s in our backyard. It’s awesome.”

Beane isn’t riding this weekend due to an injury. But still, he says, he wouldn’t miss watching the competition, especially the cyclists climbing the hills.

There’s More to Gears and Guitars than Cycling and Music