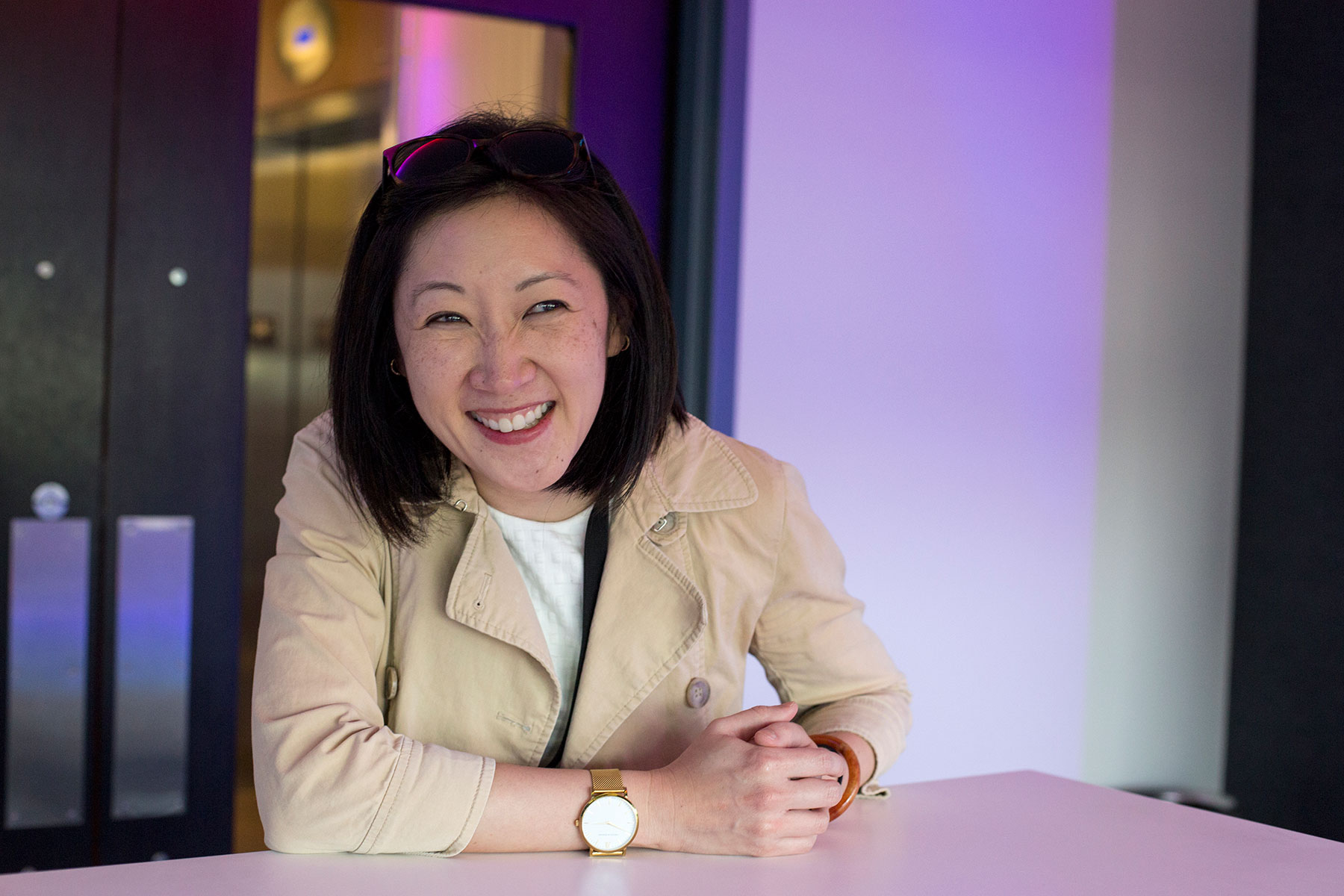 Some of the questions we ask for the People of the Innovation Quarter may sound easy, but they’re actually quite difficult to answer.

Take this one, for example. I asked Jennifer Chan-Huang, “What personal accomplishment makes you the most proud?”

Jennifer thinks deliberately. The pause gives me a second to look around Jennifer’s office on the first floor of 525@vine.

The shelves behind her desk are filled with interesting things: photographs, plants, a pair of champagne glasses and a pink hard hat accompanied by a safety vest. To her left is a small sliding window that opens into the office next door, not unlike the window you’d find at a drive-thru.

Jennifer is a property manager with Cushman & Wakefield, the commercial real estate company that manages the Wake Forest Biotech Place Conference Center, 525@vine and Bailey Park. She’s worked in the Innovation Quarter since February 2012, when she moved from Chicago with her husband.

Back in the present, she asks, “Can we circle back to that question?”

“Sure. What is your hidden talent?” I substitute.

People tend to choose “non-hidden” talents, but not Jennifer. She takes it literally.

“Not specifically. I cook Chinese food, and I just got back from France, so I’ve started focus on French cooking,” she says. “The last thing I made that was really good, though, was a roasted pork shoulder, Korean-style with lettuce wrap and rice.”

At this point, I’m hoping she’ll adopt me into her family—at least at dinnertime.

“That sounds amazing,” I say, salivating.

I change the subject before I get too hungry to finish the interview. “What is the last song to get stuck in your head?”

She doesn’t have to think long for this answer.

Not at all what I was expecting.

“How did you get that song stuck in your head?” I ask.

“My family was on vacation, and while we were walking down a street in Paris, there was an accordionist playing a song in French. It was a very nostalgic type of sound,” she says. “My brother-in-law said it sounded a lot like ‘Pop Goes the Weasel.’ He started humming the tune. It’s not very noble or dignified, but it’s impossible to get out.”

“Tell me about the last great idea you had or heard.”

“I’ve been using an app to help increase productivity, but someone told me that the use of digital to-do lists actually decreases our ability to remember,” Jennifer says. “They said that writing things down instead of using an app is more successful. So I’ve started journaling and using good old-fashioned lists, and it seems to be working.”

“Along those lines, what old technology that’s no longer with us do you miss the most?” I ask.

“Wow, there’s a lot,” she says. “I miss the rotary phone—you know, the one with the cord. You were stuck in one spot when you called, and if you had to call someone with a lot of nines in their number, you had a lot of spinning to do.”

Jennifer provides her own sound effects for the old-timey phone. They’re surprisingly realistic.

It may not sound like the phones were something to miss, but hang in there. She’s onto something.

“It was nice sitting there while you were calling, just thinking. When you were on the phone, you were focused there and in the moment in the spot,” Jennifer says.

“A Toys ‘R’ Us kid?” Jennifer says first. She has another, more serious answer—to be a person who brings joy—but this was her first response.

“There’s indoctrination for you,” she laughs.

“I may already know the answer to this question, but if you were to take up a second career, what would it be?”

“My co-workers and I have been joking about starting a restaurant in the renovated Bailey Power Plant. A Cushman & Wakefield restaurant,” she answers. “I would love to cook for a restaurant. And my co-workers, Pam Lawson and Heather Freeman have former lives as a culinary school graduate and a restaurant manager.”

“Ok, back to the personal achievement,” I say.

For all the effort it took to come up with that answer, it’s a good one.

And there you have it. Jennifer Chan-Huang is a French-cooking, list-making property manager who wants to be a Toys ‘R’ Us kid. If you see her, start humming “Pop Goes the Weasel,” and if you get invited over for dinner, save me leftovers!