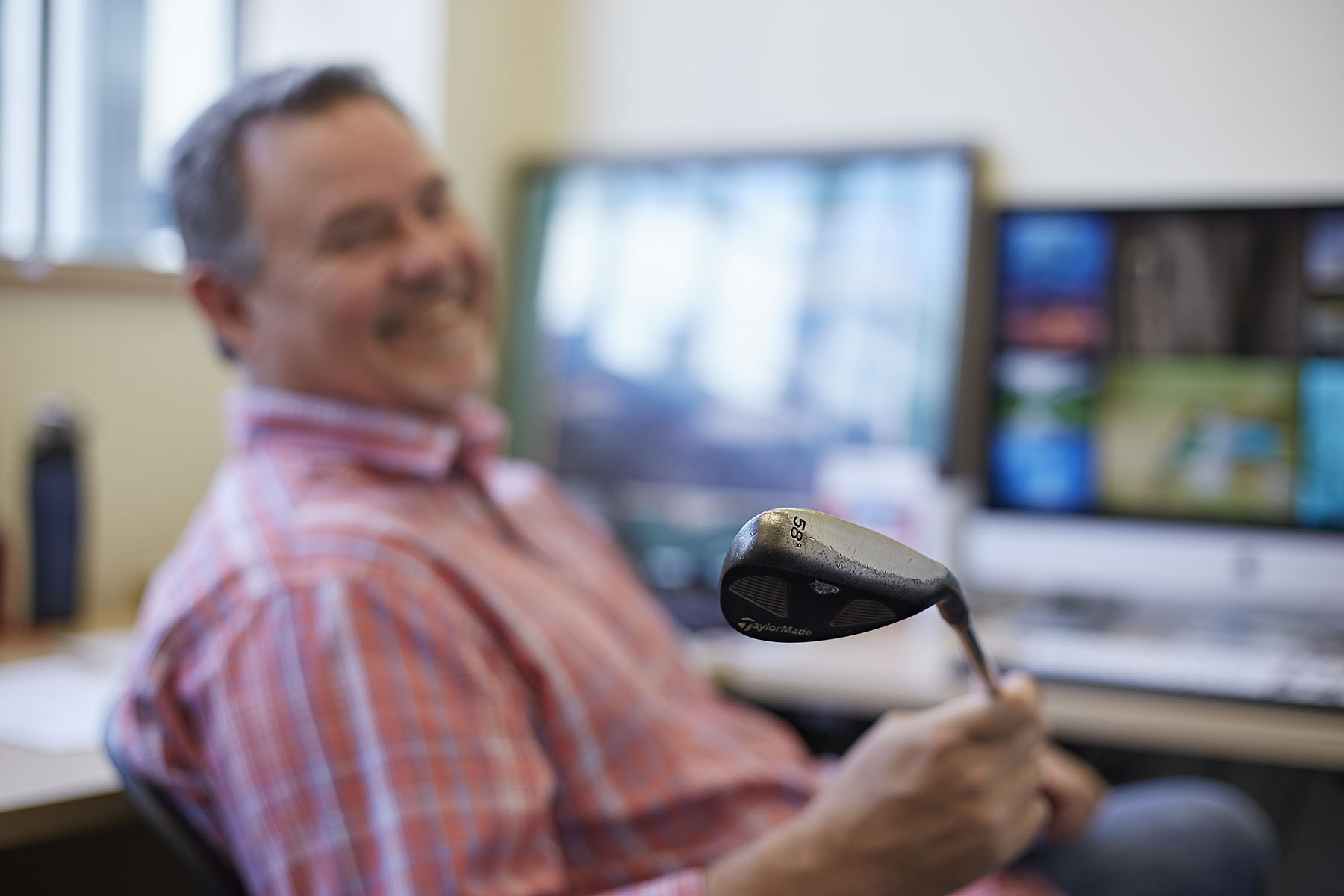 Sun pours in the glass windows of Scott Rushing’s office in 525@vine. I find the director of research information systems for Public Health Sciences fiddling with a golf putter in his office against the backdrop of some pretty amazing clouds visible out the window that looks into the horseshoe-shaped courtyard of the building.

He’s got a friendly smile and a twinkle in his eye that I chalk up to good old Southern hospitality.

“I’m a local country boy,” he tells me early on in our conversation. “I was born and bred here.”

Scott has worked for Wake Forest Baptist Medical Center for over 25 years, which brought him to the Innovation Quarter when Public Health Sciences moved here a couple years ago.

I lead with a question that makes most people think. “What personal accomplishment makes you most proud?” I ask.

Without a pause, he says, “Seeing my kids develop and grow into pretty cool people.”

“Both are really, really bright, and it’s amazing to me to watch their growth as people—not just in academics. Being part of their lives is probably my greatest personal accomplishment,” he says with a smile.

And then he throws me a curveball.

“My son likes to hide around corners at home and jump out and punch me in the stomach,” he says.

Apparently, the Rushing household reenacts scenes from The Pink Panther, complete with a 10-year-old Cato.

“We like to wrestle, and he likes to surprise me,” the ninja’s father explains. He mimics his son, “’You weren’t expecting that, were you Dad?’”

I’m beginning to think that twinkle in his eye is more mischievous than anything.

I ask the homegrown computer whiz, “Who is a local innovator you admire?”

Immediately, Scott responds, “If you would have said “national innovator,” I would have gone for someone like Elon Musk.”

He has another answer ready for me; I don’t even have to ask.

“But if we’re going with local, I would say Wexford Science + Technology,” he continues. “The real estate developers are remodeling, restructuring and rebuilding what looked nothing like this when I grew up here. I lived in Winston-Salem during R. J. R.’s heyday, and to see the reshaping of downtown Winston into a more biotech-oriented, innovative area, it’s amazing. I admire Wexford for having the guts to take a chance on building this place.”

Given how much you admire what’s happening at the Innovation Quarter, is there an unexpected connection you’ve made by being here?”

“The connection is still somewhat untapped,” he says, “but being in the same building as Clinical Ink has been very interesting.”

Clinical Ink develops paperless platforms for clinical trials, in case you were wondering.

Scott continues, “It’s been good to understand what services they provide because Public Health Sciences sometimes gets involved in international research, and they have a data capture system that’s validated and can be used in those settings. I’ve enjoyed talking to some folks there.”

“How do you define innovation?” I ask.

Again, he’s ready for me.

“For me, innovation is finding better ways and new ways of doing things that we are already doing,” he answers.

His answers are quick and decisive. Did I mention this was my quickest interview to-date?

I change it up. “What is the last song to get stuck in your head?”

I ask, “Do you remember the lyrics?”

He actually does. That’s rarer than you might think.

“There’s one lyric that always sticks in my head,” he says. More golf club twirling.  “In the song he was going to meet someone, and they’re going to ‘fill in the missing colors/In each other’s paint by number dreams.’”

“Tell me about the last great idea you either had or heard,” I say.

More golf club twirling. “What comes to mind is not the most recent,” he says. “It happened a couple years ago.”

“We were working with a research project—called the LIFE study—that was developing a cognitive test for seniors that required them to answer questions by hitting certain keys on a computer keyboard. Dexterity was a problem, and the participants were hitting incorrect keys accidentally. It was a timed test, too, so it was slowing others down,” Scott explains. “The bottom-line was that dexterity was affecting the outcomes.”

“I can see how that would happen,” I assure him.

“I came up with the idea to build an overlay for the computer keyboard which blocked out the majority of the keys, except for the applicable keys for the test,” says Scott. “The benefit of the idea was that the quality of the data went up, the completion of the test went up, and I think that the frustration of both those administering the test and those taking the test went down.”

“The things you never thought you’d work on, right?” I ask.

“That’s what I like about Public Health Sciences: we work through the problems you never imagined you’d have and we find innovative ways to solve them,” he agrees.

I think that I already know the answer to this question—given the golf club and other golf implements in his office—so I ask, “Finish this sentence. When I grow up, I want to be a….”

He doesn’t miss a beat. And there’s that twinkle. I suspect he’s teasing me.

So he’s serious. That twinkle makes it hard to tell.

“Now in my later years, I want to be a professional golfer,” Scott continues.

For the record, I believe I had that one.

“I didn’t have the skill for either of them,” he says. “But if I could take up a second career, it would be golf. Absolutely.”

Despite his assertions, Scott’s ever-present twinkle makes me think that he has more surprises up his sleeve than his son has surprise attacks. I wouldn’t be shocked to see him on my television one day during coverage of a golf tournament…or in the ring as a professional wrestler. For now, though, I’ll look forward to seeing his face around the Innovation Quarter.