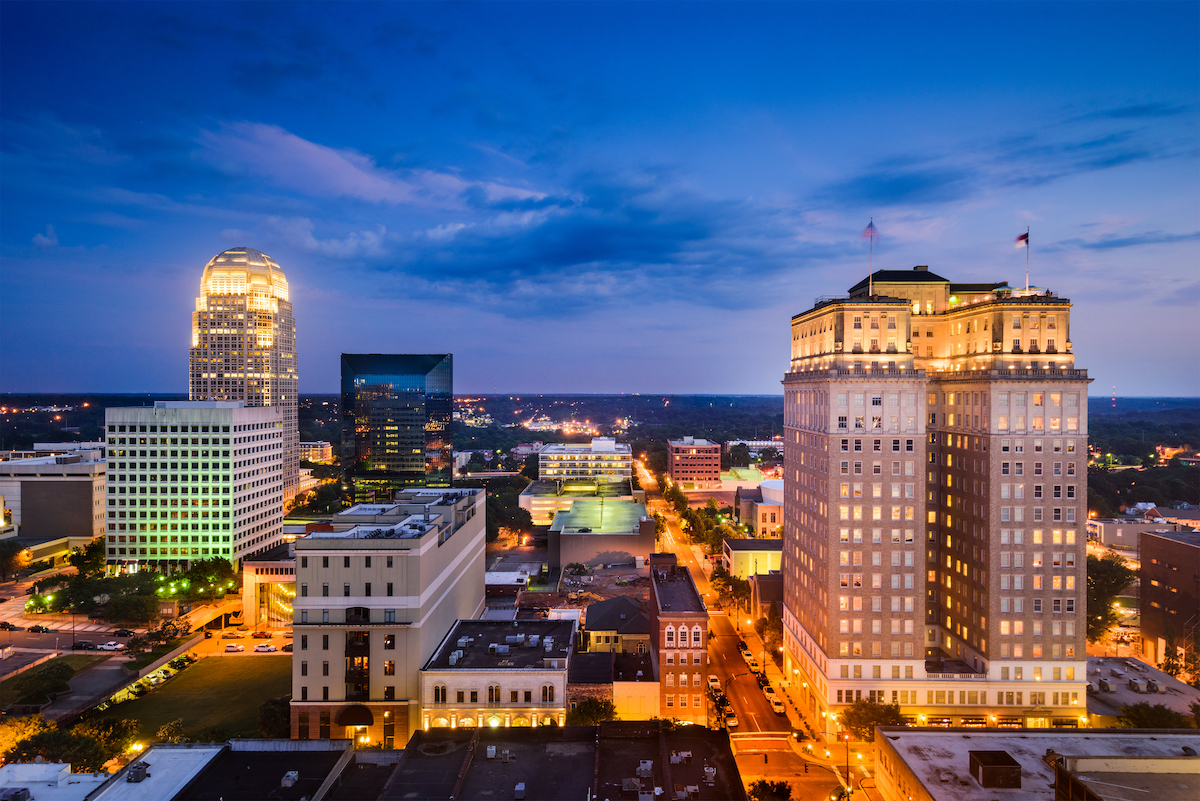 Defined by winding greenways, eclectic art galleries, relaxed restaurants, stately architecture and lively outdoor hangouts, Winston-Salem’s downtown areas are distinct in their personalities and characters. Discover a few of the multiple personalities and noteworthy neighborhoods in the city’s center.

The heart of Winston-Salem’s downtown Arts District is at the intersection of 6th Street and Trade Street. Here, you’ll find a mix of art galleries and studios in renovated brick buildings that were once part of a thriving tobacco market. Artists of all mediums and styles contribute to the eclectic feel of the neighborhood, with its anchor being Piedmont Craftsman, an organization with more than 50 years of history promoting the work of its members and creating community connections.

The surrounding blocks are just as vibrant. ARTivity on the Green—a once-vacant, half-acre lot on North Liberty Street—was erected in 2015. The steel structures represent the convergence of art and commerce while providing a venue for festivals and concerts. Mixed-use buildings, such as Trader’s Row, provide housing, corporate offices and restaurant space to round out the Arts District experience.

Truist Stadium, home to Winston-Salem’s minor league baseball team, the Winston-Salem Dash, was a 2010 addition to downtown and has been at the epicenter of development for the areas surrounding Burke Street and Brookstown Avenue. This neighborhood has always been a major link between the city’s downtown core and the Atrium Health Wake Forest Baptist Medical Center; however, recent revitalization and new retail, office and residential developments have transformed the area.

Thanks to the city’s sidewalk and street lighting improvements, along with business owners’ dedication to making this area a destination, the Ballpark District has become a hub for commerce and retail. Some of Winston-Salem’s oldest and newest establishments alike can be found on these streets, which are lined with various businesses and restaurants — from a high-end consignment store to a design agency proudly working with some of the area’s most well-known brands.

Downtown Winston-Salem’s Business District is home to the buildings that define the city’s skyline and can be broken into three distinct sections. The historic R.J. Reynolds Building, which served as design inspiration for NYC’s Empire State Building, anchors the corporate sub-area, while the sub-area formerly known for its financial tenants includes major high-rise office buildings. The government sub-area is home to the Forsyth County Hall of Justice and offices for the City of Winston-Salem, Forsyth County and the United States federal government.

It has been estimated that downtown Winston-Salem brings an estimated 25,000 employees, visitors and customers to the area daily, many destined for the Business District (sometimes called the Skyline District). Its central downtown location, an abundance of parking and proximity to Salem Parkway and US-52 make it a sought-after spot for large corporations.

The Goler Heights area runs along Patterson Avenue and Sixth Streets on the northeast edge of downtown Winston-Salem and boasts a rich history of community-driven development. The Goler Community Development Corporation (Goler CDC) was formed in 1998 as members of the Goler Memorial A.M.E. Zion Church sought to reinvigorate and revitalize what used to be a thriving main thoroughfare for black businesses. In almost 25 years of existence, Goler CDC has led numerous initiatives like bringing affordable housing to the area and establishing an urban garden that provides fresh produce to the surrounding community.

Today the Goler Heights neighborhood is still growing, as its $100 million mixed-use development plans continue to come to life as a multi-generational, multicultural, mixed-income neighborhood. Goler CDC has also added workforce development as a pillar of its mission to further strengthen the community. One of its latest initiatives, TechCareers, supports unemployed and underemployed residents with the training, education and resources they need to pursue a career in the information and technology industry.

In 2013, the Innovation Quarter ushered in significant redevelopment of former tobacco warehouses and factories, and Phase II will expand the existing footprint by 28 acres. The plan includes an additional 1 million square feet of clinic, lab and office space; 450 residential units and 30 thousand square feet of ground-level activation. A central pathway called Fogle Commons will run the length of Phase II and support pedestrian activity and multi-layered programming. This plan will also build on the Innovation Quarter’s grounding principles, including creating proximity through shared spaces and augmenting the spirit and character of Winston-Salem.

Where Do You Fit In?

Known as “The City of Arts and Innovation,” Winston-Salem’s focus on building a vibrant downtown has supported the creative, entrepreneurial spirit that’s allowed for the city’s growth. No matter where you end up, you’ll find the support, resources and community you need to succeed—and a place you can be proud to call home.

Stay in the Know

Be the first to know: Subscribe to receive news and insights from the Innovation Quarter. You’ll get information on Phase 2 updates, upcoming events and more.