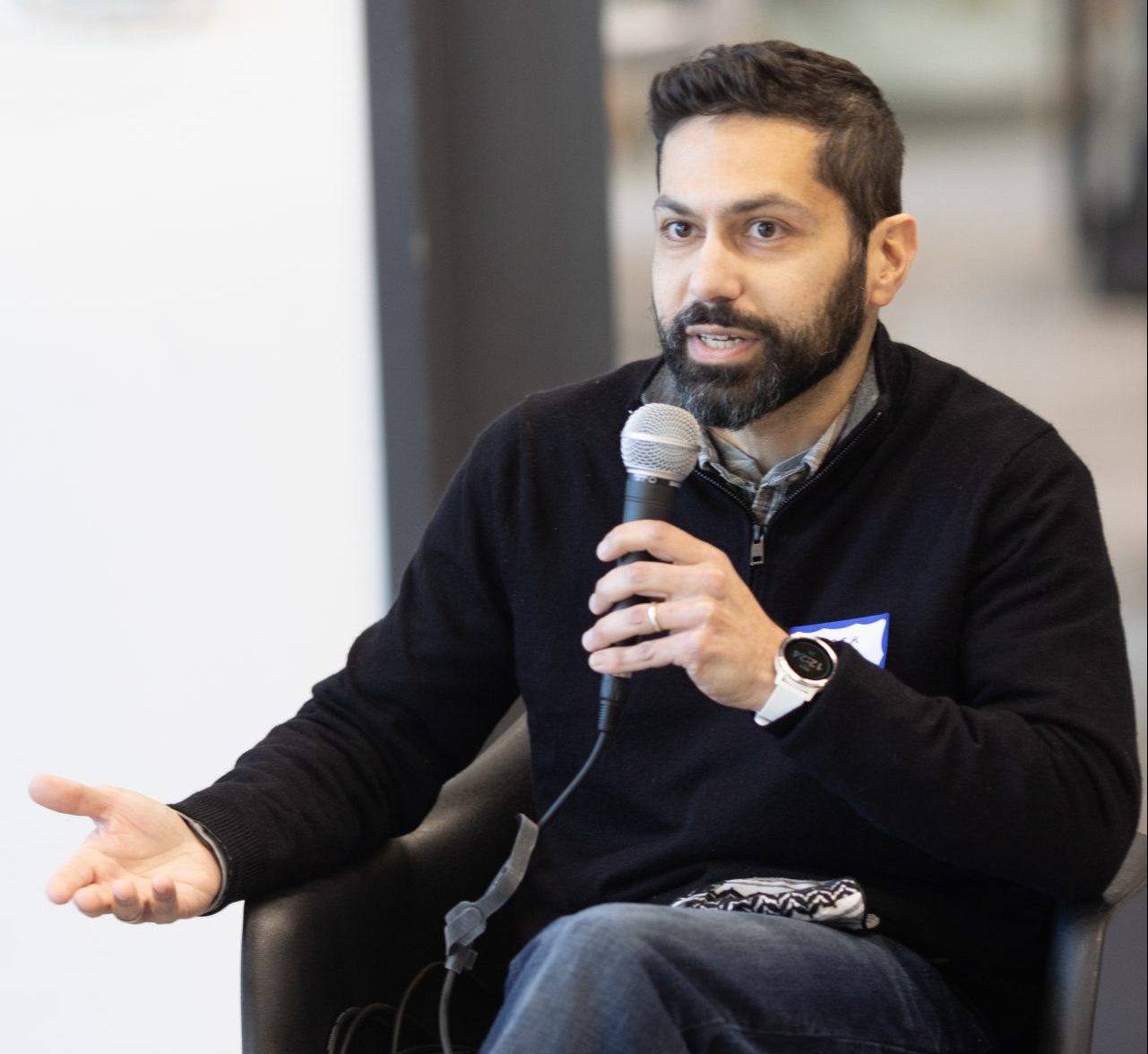 This feature is the third in our three-part series “Startup Support for Entrepreneurs of Color: Inclusive Business Accelerators and Grants in and around the Innovation Quarter.” Read the first feature here and the second feature here.

In the Innovation Quarter, we strive to support, facilitate and amplify opportunities and resources for entrepreneurs and drive economic impact by advancing an inclusive entrepreneurial ecosystem.

Yet, even with startup activity on the rise across all sectors—especially in healthtech—we know that entrepreneurs of color remain underrepresented when it comes to access and support—from securing capital to finding mentors and community and connecting with other women or minority venture capitalists.

Black and African American startup entrepreneurs received only a tiny fraction—1.2%—of the record $147 billion in venture capital invested in U.S. startups through the first half of 2021.

So, what does it take for entrepreneurs of color and women entrepreneurs to not only start a business but to thrive and grow as an owner and community member? Fueled intentionality.

Bridging this gap, rooted in systemic, social, economic, and historical inequality and injustice, requires listening to and understanding the unique challenges entrepreneurs of color and women face to create solutions that best serve them.

Venture Winston Grants and Equilibrium Impact Ventures, our partners in and around the Innovation Quarter, are working to reduce disparities by supporting entrepreneurs of color and women entrepreneurs.

How to Disrupt the Status Quo

Kasem Rodriguez Mohsen is an equity advocate, author, speaker and founding partner of Equilibrium Impact Ventures. As the son of immigrants—a Puerto Rican mother and a Palestinian father who was a refugee—he’s spent much of his professional career working as a data scientist and entrepreneur around the world, experiencing personal and professional challenges because of his biracial identity.

He’s also an American Southerner who moved to Pensacola, FL, from his birthplace of New Jersey after his father’s death when he was just five years old; this upbringing has provided him with insight into racial inequities and injustices particular to the South.

After the murder of George Floyd, as the entire country began to have overdue and frank conversations about systemic and institutional racism, Kasem began personal internal work to understand how racism and white supremacy was “showing up in me, in my life, in the way that I viewed the world and the way that I viewed business and entrepreneurship.”

He also reflected upon his struggles to fit in and assimilate and all the obvious and not-so-obvious issues around racism that he faced as a young entrepreneur.

From there, he put on his data scientist hat to explore the statistics behind these disparities, especially in entrepreneurship and venture capital. He found the numbers dire. This discovery led him to refocus his mission as an entrepreneur and investor. He is now dedicated to building equitable funding and support systems for underestimated entrepreneurs, especially those focused on improving the metrics of health, happiness and empowerment.

The country’s median white household is an estimated
7.8x wealthier than the typical Black household—
$188,200 vs. $24,100—and Black Americans hold just
4% of the nation’s wealth.

This reflection and research synthesized into a point of view that now fuels him to make it easier for underestimated folks like him. Specifically, Black, Brown and women entrepreneurs who have been excluded historically from capital, asset classes, real estate, loans, municipal bonds, and much more to start a business and gain opportunities that help grow intergenerational wealth and community health and happiness.

Now, after scaling and selling three startups, he is an angel investor who considers himself an “ethical disruptor” and “impact investor.”

He’s also the manager of Venture Winston Grants, where he’s focused on ensuring underserved entrepreneurs and entrepreneurs of color have access to capital, support and resources provided by the City of Winston-Salem and local business leaders.

He’s taking action towards change, dedicating his life to get funding to those who need it most.

“At VWG, we conducted an equity audit which led to amazing outcomes in terms of the diversity of our grant winners.”
—Kasem Rodriguez Mohsen

Venture Winston Grants is a public-private partnership program within Agile City Winston-Salem that aims to bring future-focused disrupters to Winston-Salem.

Venture Winston provides early-stage startups with a non-dilutive $50,000 grant and an infrastructure of support, connections and resources to companies building the future of healthcare, agriculture, food, aviation and unmanned flight. If a company is at a stage where a $50,000 non-dilutive grant is meaningful, this program might be the perfect fit.

Venture Winston’s support doesn’t end at the award of the $50,000 grant. Grant winners are also provided one year of wrap-around community support, including access to mentorships, networks, incubators, accelerators and investment opportunities throughout Winston-Salem’s ecosystem and nationwide marketing channels.

On October 9, Venture Winston’s inaugural Disrupt Winston pitch event featured the brightest minds and innovators in business as they pitched their startup ideas in the sectors of nutrition & agriculture, health and well-being, and aviation and aerospace.

Winners of the pitch event will win a $50K grant and support from Agile City/Venture Winston Grants when they join the inaugural cohort on November 1, 2021.

RSVP to the shark-tank-style pitch event. Support Venture Winston Grants or get involved as an entrepreneur.

Social determinants of health (SDOH) are the conditions in the environments where people are born, live, learn, work, play, worship, and age that affect a wide range of health, functioning, and quality-of-life outcomes and risks

Founded by Adrian Smith, the executive director of Flywheel Foundation, Dr. Shanté Williams, the CEO of Black Pearl Global Investments, and Kasem Rodriguez Mohsen, Equilibrium combines the patience of philanthropic capital with the innovation of entrepreneurship to drive and replicate impact at scale.

In its early stages of development, the founding partners sought to investigate what philanthropic capital can do that normal venture capital cannot. They analyzed the pitfalls of economic incentives that have led to Black founders receiving such a small percentage of venture capital, and they committed to investing in mission-driven startups to support sustainable social impact by focusing on the social determinants of health.

Together, they’ve created a new framework and set of rules for how to allocate raised capital for this venture fund and how they, themselves, were going to participate in the profit.

Venture firms in the United States invest over
$130 billion annually. However, Black and African American investors have systematically been excluded from mobilizing this capital.

Today, only 3% of venture capital investors are Black. Only 2% of partners—individuals that make investment decisions at venture firms—are Black.

This diverse founding team, which brings a set of folks together who are willing to experiment with ideas that can change the equilibrium of venture capital funding and the entrepreneurial ecosystem, has committed to allocating at least 2/3 of their capital investments to Black, Brown and women founders.

Their goal is to create more successful Black, Brown and women entrepreneurs, investors and fund managers across the entrepreneurial ecosystem.

Kasem calls Equilibrium “a grand experiment” that will use money from different places with different incentives. The founders incentivize themselves differently. They plan to share wealth with nonprofits that don’t typically get compensated well for their community work.

The ultimate goal is to create a “demonstration effect” where others look at what Equilibrium is doing and say that’s a really good idea. Let’s do that too.”

Connect with Equilibrium Impact Ventures as a startup founder or investor.

Why do racial disparities matter for everyone? Revenue disparity has an enormous effect on the US economy.

Four million new jobs and $981 billion in revenue would be added if the average revenue of women of color-owned firms matched that of white women-owned businesses.

Learn more about resources available to startup businesses in the Innovation Quarter.